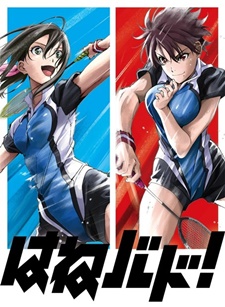 An official website has opened and revealed that the sports manga Hanebado! will be getting a TV anime adaptation. The series is scheduled to premiere for Summer 2018. More cast members and broadcast information will be announced at a later date.

Additionally, the manga creator has announced that a side story novel based one year before the events of the manga is slated to publish by Kodansha's light novel bunko imprint on June 29, 2018. The novel will be penned by Yuuichi Mochizuki and drawn by the manga author.

Synopsis
Ayano Hanesaki, a first-year student at Kanagawa Prefectural Kitakomachi High School, has a badminton ability able to surpass others effortlessly yet avoids playing the sport. She meets Nagisa Aragaki, a third-year student who practices day and night aiming to become the best player in Japan. Encouraged by coach Kentarou, Tachibana supported by club colleagues, and fired up by various rivals, the two engage in their youth and adored sport so thrilling like a shuttle flown at high speed!


The badminton-centered series set in Kanagawa prefecture is drawn by Kousuke Hamada and began its serialization in Kodansha's good! Afternoon magazine since 2013's Issue 32 released in June that year. Kodansha has published 11 compiled manga volumes so far, and the 12th is scheduled to release on March 7, 2018.

There will be huge fans from continent of Asia.
I'm not a huge fan of badminton but having played it, it's a beautiful game that demands quick and strong reflex.

oh my freakin god sports anime is taking over the world! Ahiru no Sora, Major 2nd, this badminton anime and others that im forgetting, my lord this is glorious. Fork the boobs though, animation looked damn good but the boobs are distracting, one of the reasons why I am usually not a fan of having a female cast in sports.

oh and badminton is one of my favorite sports ever, they're just so fun to play and so entertaining to watch in the Lee Chong Wei / Lin Dan era, footwork, speed, power, defense, deception, mind game, and most importantly that decade long rivalry of 2 legends

Oohh bitch. I'm in there! No ecchi womens sports. Loving the sound effects and animation.

I'm really looking forward to this. The interesting thing is that it's not gonna be Shounen Anime. Finally some unique Sports Anime.

Huh, I'm actually interested in this, I love badminton :D

Just read it. Too bad only five chapter available but it look like some part can be hyped like this.

My Favorite sport get anime adaptation !!!

I think japan want more citizens can get the spirit at badminton, so japan can dominated badminton into the whole world especially 'Mens Single, Mens Doubles, Mixed Doubles'. Japan was dominated in 'Womens Singles and womens Doubles'

This gonna be good.

Finally an anime about Badminton my favorite sports. Anyway I found some pretty interesting stuff after some search in google, about some drastic change in character design for Female MC like this. Hope the anime can adapt that too

reZARE said:
so it's about women player? and i won't see any taufik hidayat or lee chong wei or lin dan reference?

that's possible but too far. i think Susi Susanti is more likely

so it's about women player? and i won't see any taufik hidayat or lee chong wei or lin dan reference?

Yeah and that would be a good thing, but that isn't what the trailer is showing.

I definitely understand how you feel, as I also feel the same way, but isn't the movement kinda realistic? Even if the girls with bigger breasts wear sports bras, there may be some type of jiggling, seeing as they're running around and jumping all over the place. I think breasts are more likely to not move around as much if they're smaller. I did see jiggling in the trailer, but I don't believe it's excessive and for the purpose of fanservice.

Time will only tell on that. I am going to 100% give it a shot as if my worries are wrong I can see it being a blast to watch. When we get a much longer trailer of scenes that are played out well longer is when I will make more concrete concerns or praises.
if you dont mind spoiler you can look a little at the manga page virtual core been posted in page 1 to understand if it will be fanservice like you think

I've only read the translated chapters, but it was pretty nice. Adding this to my PTW list.

I'm pretty... mixed about this.

At one hand: The PV is actually pretty good, showcasing good animation etc with the sports. And also while I ain't the biggest fan of Badmniton I think its alright as a sport, so that's a plus to it.

But on the other hand: The staff is fucking mixed as shiiiiit. A pretty bad director with a good script writer. I think its the matter of how this looks but by the impression I got this is a potential hit-miss. But we'll see.


THIS IS GONNA BE SO FUCKING HOT!!

BOBtastic... Would it be better without tasteless nudity...

Hmm.. boobs and thighs
Yeah ill add it to my list.