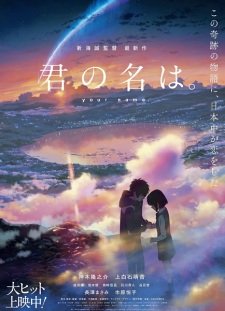 A live-action Hollywood adaptation of Makoto Shinkai's Kimi no Na wa. (Your Name.) anime film has been announced to be produced by Paramount Pictures and American production company Bad Robot on Wednesday. J.J. Abrams (Star Wars: The Force Awakens) and Lindsey Weber from Bad Robot will be producing the film, along with the original film's producer Genki Kawamura. Academy Award-nominated screenwriter Eric Heisserer (Arrival) will compose the script. The two companies are collaborating with Toho on the production, the company that produced the original film, who will also handle the film's distribution in Japan.

Since its premiere in Japan in August 2016, Kimi no Na wa. has become the fourth highest-grossing film of all time in Japan, the second-highest grossing Japanese film, and the second highest-grossing anime film; with a box office revenue of more than $355 million. The film won the Best Animated Film award in the 71st Mainichi Film Awards earlier this year, and was nominated for the Animation of the Year award in the 40th Japanese Academy Prize in March.

I'm looking forward to this movie! I heard that the girl is gonna be native American and the boy is gonna be from Chicago. And the shrine stuff is gonna be magic. Is this true?

If they make it as good Fault in the Stars then there's a chance but knowing Hollywood they'll butcher this and put in someone else's interpretation with artistic "freedom" the next thing you realize it's a totally different movie. There's also a huge chance this will be used as a means to push political agendas SJW would take advantage off.

It hurts to say but they are most probably going to ruin it like they did Death Note. Because of these dumb ripoffs people get a wrong impression about Anime :(

If Battle Angel Alitia bombs, I'm assuming this will be canceled.

I honestly don’t get why people keep on making these live action adaptions. I can’t think of a single one that was well recieved by fans or even casual movie goers. Just leave this work of art alone Hollywood.

Botan-Chan45 said:
It's going to be garbage. WHY AMERICA OR HOLLYWOOD. Just stop already.

Yeah, I agree they should stop ruin a amazing work of art. Live action movies are always bad, I watched live action movie of Higurashi no Naku Koro ni and it sucked.

It's going to be garbage. WHY AMERICA OR HOLLYWOOD. Just stop already.

i am not really looking forward to it. but i'm interested to see how exaclty they'll adapt it into a love action movie.

So the next good story will be JJed. Fortunately, no one can force me to watch this. Not even someone with a gun!

Eventhough i'm positive it'll be bad, I still hope that it'll be good

I'm afraid of this. I'M AFRAID OF THIS!

Seriously, I think if this was directed by best Japanese director then I could sleep well. But no... it's gonna be Hollywood and directed by J. J. Abrams who is gonna rape an amazing story.

Holo-san said:
Aaaaand it's gonna end up like death note, ghost in the shell and dragonball... Please staaaap
I mean yeah those were all pretty hideous, but you can't say that at least DB:E and DN were not pretty unintentionally funny.

It's a coin flip. It has all the elements of a good adaptation but it needs strong actors who can do the body swap and fantastic cinematography. I'm not knocking it.

I am really scared of this... Especially after Netflix's "Death Note" , really really hope they won't destory one of the greatest anime films of all time...

tbh though... I don't have high expectations

atleast in can be good if its mwde by same voice actors by japanese director , actors and in japan but wtf is this shit

Man.. why do they always have to go and destroy a masterpiece. Fucking numbnuts... They don't understand a thing even after Netflix screwed with deathnote big time.
As if this wasn't enough.. I heard that a live action series is going to be made on One Piece......Kamisamaaaaaaa!!!!....