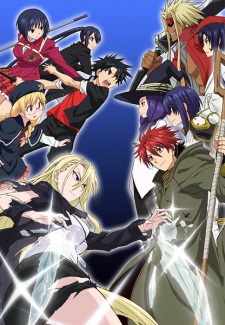 Manga author Ken Akamatsu has announced that his manga series UQ Holder! will receive two additional original anime episodes after the anime adaptation airs. Each episode will be bundled with the manga's 16th and 17th limited edition volumes to be released on March 9, 2018 and June 8, 2018, respectively.

The manga initially began its serialization in Kodansha's Weekly Shounen Magazine in August 2013, before transferring to Bessatsu Shounen Magazine in October 2016. It is inspiring an anime adaptation by J.C.Staff titled UQ Holder!: Mahou Sensei Negima! 2, which will begin airing on October 3. The series has already released a prologue OVA that was bundled with its 14th volume on September 8.

So the anime mostly will be the 2-cour right? Though I still can't trust the anime staff team due to how Negima anime was gone all this time......

I'm really looking forward to the anime and OVAs.

I already spent way too much time reading the manga, anyways