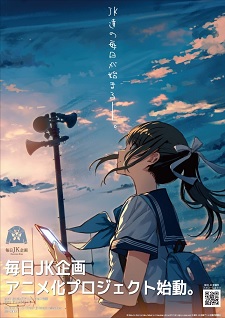 Kazuharu began drawing illustrations of girls in various high school uniforms in 2014. To date, Kazuharu has drawn 40 such illustrations and posted them on various social networking sites such as Twitter and Pixiv. On April Fools' Day this year, Kazuharu had launched a browser-based game adaptation of the illustrations.

The anime project consists of an episode 0 pilot animation which will be released in 2017, as well as an anime series which will debut in 2018. A seiyuu audition will also be held at Zenkoku Entame Matsuri in Gifu Prefecture in August, where the winner will be selected to voice a role in the pilot animation production. Seiyuu Emi Hirayama will host a talk show with Kazuharu at the event.

As par usual, if I see cute or sexy girls, I'm watching

Nice illustrations but at this point it's all form and no substance. Sure, it's more than most average anime nowadays but not enough to make me interested in watching. Sounds like plain JK fetish fuel.

Robiiii said:
Must be a dream come true for a Pixiv artist to inspire a freakin' anime series, brilliant XD

Yep it actually is xD Man I wish that myself to be fair. >w<

That seiyuu audition sounds fun! The art looks pretty too.

Must be a dream come true for a Pixiv artist to inspire a freakin' anime series, brilliant XD

No MC please. We don't need more Amagami style anime, even though some of them just beg to be put in a romance anime.

Didn't really say anything at all about the story but high school girls are always nice I guess..

Looks very interesting. I'm gonna check it out once it releases.

I'm eager to know what the anime is about.

Well this looks something neat, although I want to check what it has to offer or what it'll bring on the table but I won't deny the visual for this (for the news to put in) looks pretty >w<