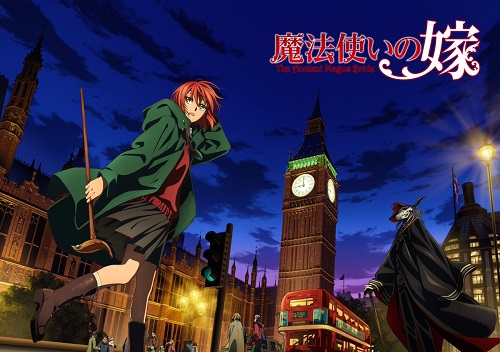 Additional Cast Members for Mahoutsukai no Yome TV anime have been announced via a Nico Live for the anime series on Saturday. The anime will be aired on Saturdays (effectively Sunday midnights) starting October 8 on Tokyo MX and MBS, followed by AT-X, TV Aichi, TV Saitama, Chiba TV, Hokkaido Housou, and BS11. The official website has also revamped to display information on the TV series instead of OVA series.

The pre-screening of the first three episodes of TV anime, which was already held at Anime Expo 2017 in the U.S. and Japan Expo 2017 in Paris this month, will be held at various places in Japan on September 9. More information will be announced at a later time.

I wasn't planning on watching this, but now I'm going to because of JUNNA!!!!!

I kind of put on-hold the manga long ago to wait the new chapters get piled, but then I forgot where I left off so... I'm hyped for the anime instead lol XD

I've been waiting for this

Namikawa♥ and Hino both perfect. I'm curious how Alice will sound.

This is a pretty nice seiyuu cast selection, and again I will say this like the one time with the other thread: Looking forward to this a lot. And I mean a lot.

Really happy with the selection of seiyuus. Including of Alice. Tamura Mutsumi's 'young boy' voice would really fit Alice's voice. But what I will look forward to more is her voice as 'a maiden in love'.

PekiNN said:
-I can't wait for this to air.
Mahoutsukai no Yome manga is one of my favourite!

Same here. I imported all available volumes from Japan.

The waiting is excruciating.

Looking forward to this one :D

-I can't wait for this to air.
Mahoutsukai no Yome manga is one of my favourite!

My life is near complete

The more I hear about this, the better it's looking to be. I can't wait for this to air!