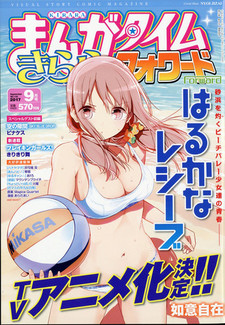 This year's September issue of Houbunsha's Manga Time Kirara Forward magazine is revealing on Monday that a TV anime adaptation of Jizai Nyoi's Harukana Receive manga has been green-lit. More information regarding the anime will be announced at a later date.

Synopsis
The story takes place in Okinawa, where Haruka forms a beach volleyball pair with Kanata. Kanata, who couldn't handle the pressure put on her by her short height, had given up on beach volleyball already but is convinced by Haruka to step back on the sand once again and aim for the junior tournament. (Source: MU)

Harukana Receive began its serialization in Manga Time Kirara Forward in August 2015. Houbunsha has published three compiled manga volumes, with the fourth volume to be released on September 12.

I'll be there for the plot, I swear.

Seems like we finally got a cute girls doing volleyball anime on our hands. Jokes aside, this seems like it could be a lot of fun. I'll wait to see how it turns out.

Tits aren't larger than the volleyball 1/10

Time Kirara on a roll, the 5th anime currently on their do list I think.

I think it would be a good series. Super excited for some thrilling fanservice action-packed volleyball ;) ;)

tragedydesu said:
Shoujo ai or yuri tag was the only thing that could save this crap
I'll pass

Your new to Kirara, aren't you?

seems like a boring sports anime with lame ecchi scenes

I'll pass on this

Look what we have here?

A new competitor, think it can surpassed Keijo?

Whaaat, I was waiting for Harigane Service, not Harukana Receive! :O

Well this looks like something fun and entertaining although, yes beach volleyball!

Dead or Alive finally got an anime? :o

In all seriousness this puzzles me because the cover totally makes it look likes an ecchi show... but it's from Manga Time Kirara? Not quite sure what to make of that lol

Beach Volleyball anime? GIVE TO XEBEC!

This is a potential hidden gem.