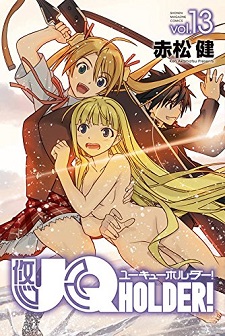 UQ Holder is drawn by Ken Akamatsu, and began its serialization in August 2013 in Weekly Shounen Magazine before transferring to Bessatsu Shounen Magazine in October 2016. The series currently has 13 volumes in print. The manga has been published in English by Kodansha Comics USA since March 2014.

so is it out today or nah?

Ooh, can't wait for it. Looking forward to all the new stuff coming up.

Story details for the ova: http://www.animenewsnetwork.com/news/2017-04-06/uq-holder-magister-negi-magi-2-anime-dvd-story-intro-september-date-revealed/.114493

Please don't mess this up like Negima! Anime. That is all.

Episode 0? Would not be surprised if it's just a 30 minute mash up recap of Negima.

Read the manga till its current ch went to check the background WOW there is a whole new Saga.

I know this is going to be a great series, also i think its a possibility of 12-13Ep like nowadays. But it may go 25 max .

Some negi saga fans may like it or dislike a bit abt the new MC , but i have not gone to read or watch the previous series as its a big story in the past. Id rather watch this move on

Well some people like me will get to see OVA after six month the release date..

Anyway, I am looking forward to TV series.BTW, Guys how many episode can we expect from this TV show? I hope its not 12 or 13.

I wish they'd bring us the OVA least during early summer time; along with the anime but suppose I can wait a bit longer. T.T

even tho it isnt shaft ill accept this