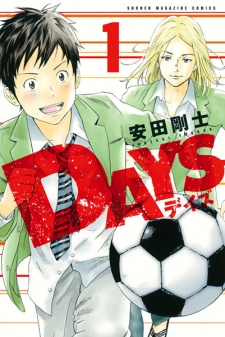 It was announced that manga Days will have two OVAs, to be bundled with the 21st and 22nd volumes. The first OVA, which will be released on March 17, 2017, will feature a match against Sakura High, on a beach, during summer camp. The second OVA, which will be released on May 17, 2017, will feature a conversation about Extreme Needy and dice, when the group gets lost in the campsite in Kagoshima.

Days has been serialized in Weekly Shounen Magazine since April 2013. There are currently 18 volumes that have been released, with the latest going on sale on August 17, 2016. A TV anime by MAPPA is currently airing, and is planned for two cours.

Does anyone know where to find these? They should be out by now, but I can't find them anywhere on the internet.

Fab news, well, if I still like the series by the end of the anime that is as the main character is insufferable and ruins so, so much of this.