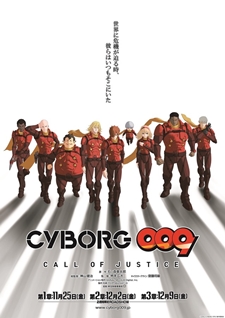 The previously announced 3DCG movie trilogy Cyborg 009: Call of Justice has revealed the cast members for the main cyborg team via its official website. The first part of the trilogy is scheduled to premiere in Japanese theaters on November 25, with the second part to premiere on December 2, and the final part on December 9, with each part to be available for two weeks.

The anime movies will be based on the Cyborg 009 franchise, created by Shoutarou Ishinomori, and will commemorate the manga's 50th anniversary. The series has received various manga and anime adaptations, with the Cyborg 009 VS Devilman crossover being the most recent anime adaptation. The original manga series was serialized in Comic NORA from 1964 to 1981, releasing a total of 36 volumes. Tokyopop published the first ten volumes for North American release between 2003 and 2005.

@Rei366 Thanks for answering, i knew that this was an old manga, as i said that watched the movie so could judge only from it. Don't know if i'll try manga or the upcoming anime, very hesitant to try a lot of stuff, but mb one day.

@allenjke If you are talking about Re:Cyborg, the movie has nothing to do with the manga or the other adaptations: just someone doing his own thing, through a twisted vision of a well-known fiction. (not saying it was bad, but this is certainly not something to watch if you want to know what Cyborg009 is)
It is pretty popular, the manga was made longer due to a big audience following it (like in many other cases). But nowadays, I suppose it would seem pretty old with so many later works doing the same thing since Cyborg009 birth. I think the series has never received an ending due to the author's death. (by the way, the man behind this also created Kamen Rider, San Ku Kai or Gilgamesh)

Is it popular or something, only watched the movie a year or two ago and it was mediocre at best, so kinda interested why this series getting another and another (and if it's the same plot it would be even more random)?