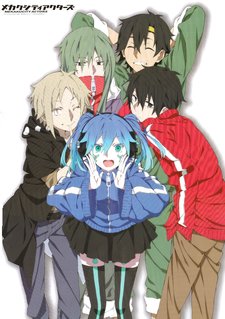 During a streaming event hosted via Nico Live for Kagerou Project, it was announced that Mekakucity Actors will get a new animated series, with the project to be tentatively titled Mekakucity Reload. It is unknown at the moment whether the series will be a sequel of the first season.

Kagerou Project is a series of vocaloid songs created by Jin. The mixed-media project has received various adaptations, including a 12-episode anime adaptation in Spring 2014, produced by studio Shaft. A light novel series under the title Kagerou Daze has been publishing since 2012, with its seventh volume to be released on August 29.

The light novel and manga have been licensed for North American release by Yen Press, while Aniplex of America licensed the anime.

LET'S GO PEOPLE!!
Lord am I hyped. Love KagePro, and MC looks really interesting, might binge it one of these days.

still waiting for this
i think this may be a remake

Sagiel said:
Bro, this got announced when I entered high school 9th grade I was hype. I'm in college now still hyped but damn.

Yeah, same here! I honestly forgot about the sequel announcement until now.

Bro, this got announced when I entered high school 9th grade I was hype. I'm in college now still hyped but damn.

Can i get a F in the chat for this anime 😬

I hope Shaft animates it I love Shaft's animations.

Well sequel or remake I don't really mind. The original (bluray) definitely suffered aesthetically from low budget and the script seems kind of newbish but I've seen a lot of more mediocre stuff get received much better.
For sequel they could remake it at an actually shaft anime level. But seems bit wasteful unless they also plan to make big overall script changes.
In other hand sequel would probably be more interesting but with the story's nature it is hard to imagine where it would go without feeling forced.

Well either way Ill watch it I love the song series. *Shrug*

Well I'm late to this party now aren't I?

May it be remake or sequel - I will watch it!

This is in my top 10 anime, and I've seen many anime before making my MyAnimeList account, can't wait!

Will it be better than the OG ones?

I couldn't really understand the mangas either...