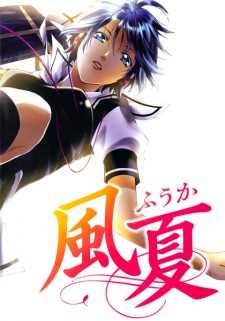 It was revealed in the 36th edition of Weekly Shounen Magazine, to be released on August 3, that Kouji Seo's manga Fuuka will get a TV anime adaptation.

Synopsis
Yuu Haruna just moved into town and loves to use Twitter. Out on his way to buy dinner, he bumps into a mysterious girl, Fuuka Akitsuki, who breaks his phone thinking he was trying to take a picture of her panties. How will his new life change now?

Fuuka is the sequel to Suzuka. The series has been publishing since February 2014 and currently has 12 volumes in print. In addition, it has been simulpub in English by Crunchyroll since April 2014. An animated preview will premiere next week.

Cant wait until the anime is released . i hope it will be as good as the manga or dig even a lit deeper cause i would like to learn more about Yuu's backstory with Koyuki and also what Fuuka was thining when she get to know better Yuu before they dated

Just started reading it today and im legit scared to continue seeing all these comments.

Brace for Impact!
this anime is going to be smashing
so glaad it got a green light
I can already feel it coming at 200km/h

I wonder if this adaptation will end before or with that infamous moment that made a lot of people drop it...

YESSS! Gotta love Seo Kouji's work! Reading the manga but now the anime adaptation is coming out! So called it. Only thing is, I hope the songs are as good as what it was portrayed in the manga....

Prepare to be disappointed by the songs they will write for the adaptation.


Can't wait for Truck-kun to get animated.

Did I just assume it's gender

It's forever Truck-chan for me.

But wait wait... Guys what if... They change the story and that "incident" never happens?

Really? There making a fuuka anime instead of a season 2 for Suzuka.😡😝😡

Good series with a super cliche plot twist that made me drop it. Spoiler without actually saying it:
Don't get attached. Just saying.
This series ended for me the moment Suzuka ended, as I pretend this sequel doesn't exist--that's how bad the plot twist is. Let's just say this is bad timing considering what happened in another certain country that may still be a sensitive topic.

.... Did they really have to do this though? I would have much rather preferred a remake of Suzuka. But yeah it's a good series and it should be great depending on the length but I still hate you Seo.

AndrewVeloz said:
How's this manga related to Suzuka ?
Fuuka is the child of Yamato and Suzuka (the main characters from "Suzuka"), so the story takes place like 17 years after that particular Anime.

Fuck Yes! I knew this would come out eventually, and hopefully the Anime improves some of the Manga weak points like it did for Suzuka. They also need to get rid of some cringy shit, but we'll see how it goes.

How's this manga related to Suzuka ?

lmao whoever gave the ok to adapt a deteriorating manga is dumb af, plenty of other shit that I think are popular enough to greenlight an S2...

seriously? this surprised me lol one of my favorite manga is getting an anime adaptation! they have heard my wish! waaa i'm so happy right now wtf! xD this made my day !!

I really liked Suzuka anime, so I'm definitly looking forward to this one :)

By the time, the adaptation is here, no one will be left unspoiled lol