by tsubasalover
Jun 30, 2016 10:10 AM | 31 Comments
Two recap movies were announced for Koutetsujou no Kabanari following the last episode broadcast today. They will premiere in theaters on December 31, 2016 and January 7, 2017, showing for two weeks each. It is unknown if the movies will contain any new footage at this time.

The announcement was made via a "special ending movie" released on noitaminA's YouTube channel (below). Illustrations drawn by original character designer, Haruhiko Mikimoto are shown with a special narration between characters Ikoma and Mumei.


Note: Video is only available until July 15. 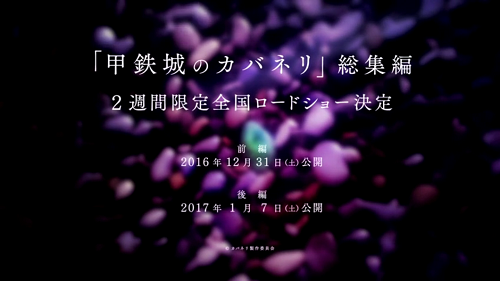 lol recap movies.. like i wanna watch that trainwreck again.

At least the Madoka movies was made to lead into the third film and weren't announced around the time the last episode aired.

I remember people saying this was better than AoT...

At the end it was a complete trainwreck and a poor rip off, they should focus on AoT instead of this.

Honestly this is so pointless. Why bother to pay to go see the same content in a theater when you can watch the show in the comfort of your home?

The series was lackluster anyway.

Why bother re-telling such a lackluster plot.

Rojo said:
What... why, what's the point? I didn't think this anime was very well received anyway?
Because people like to watch action flicks in cinemas

only in japan..
we wont watch it... so its pretty useless for me..

but ussually after a proper 2 movie...
they likely to announced something by the end of the movie..

something like 2nd season, a new OVA, or 3rd movie..

i think it happened before ... i forgot what anime...

I've never been a fan of recap movies myself. I've already seen everything, I know what's going to happen so why should I watch it again? The changes in scenes or whatever aren't enough to pique my interest.

I understand if a series is 24 episodes long and gets a recap movie or a shorter length series getting one in anticipation of a movie but two recap movies for a 12 episode series seems kind of ridiculous. I know they did the same with Madoka Magica but they at least followed it up with an original movie. It may be too early for us to know if an original movie will come put for Kabaneri but at this point in time I do not see and am not excited for these two recaps.

Two recap movies for a 12-episode series lol. Talk about milking that cow.

At least the character design was good, and the theme songs. Shame how fast he show fell apart half way through....

And giving him basically
magic
in the end was kinda hilarious in how lazy it was.

Phlippy said:
I just don't get why something like 'recap movies' even exist.
Kuroko no basket: 25 episodes into one movie -> too much cut
Kabaneri: 12 episodes into two movies -> more or less the same length, so why not watch the series?
And if it's only for extra scenes, they can release an OVA or something

Easy/Extra money I guess? Probably easy and cheap to produce and put out there and then they'd make money off whatever suckers go to watch it.

2 recap movies for an anime with 12 episodes? What a joke.

I will never understand the need for recap movies....what the hell is the point of it?

lol, they are starting to get crazy. i don't see any merit in it.

Hmm... Dunno, if I on this announcement hyped should be or not. Because the plots was until to end clear and understandable, where then these movies questionable are... - Plus how long should or will be the duration of the two movies? Because the playtime of the series was together (12×22 min.) 4,4 hours long, this means then about 2 hours duration each other? If they it about ~ 1:30:00 make would, then this would mean: that some scenes of the TV-version cut will...>_> But let's see...