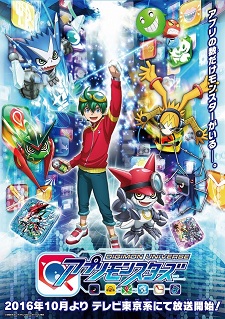 New details on the upcoming TV anime Digimon Universe: Appli Monsters were announced on Thursday at International Tokyo Toy Show 2016. A key visual for the series, which will begin airing in October 2016 on TV Tokyo and its affiliated networks, was also revealed on the official website.

Synopsis
Everyone in the world uses smartphone applications today. Unknown to them, creatures called Appli Monsters, also known as Appmon, reside in these applications. Appmon are artificially intelligent lifeforms with the ability to think and act for themselves, functioning in the space between the real and digital worlds and acting as intermediaries between man and system. However, lurking in the ocean of the Internet is a heinous artificially intelligent "last boss," Leviathan, who uses a virus to control the Appmon and hack into the system in order to control the human world from the Internet.

Seventh-grader Haru Shinkai, acquires an Appli Drive and materializes Gatchmon, a search app, using an Appmon Chip. What is the mystery behind the Appli Drive, the presence of the mysterious field between the real and digital worlds where the Appmon reside, and the "App Gattai" which allows two Appmon to evolve into one? What exactly is Leviathan's aim? The buddy story of the odd pairing of Haru and Gatchmon, who travel around the Internet in the present day, begins now!

So, we have Sakaki Yuya as main character
And digimon turned into... appmon? Was that really needed?

This sounds like it could be disastrous ..
Gatchmon looks cool though and so does everyone else BUT the protagonist ....

I like the decision to make them Appmon if that means they will completely let go off the old Digimon designs and make a fresh start. I don't like most of the new designs they showed during this trailer but the forced rehashing of the same Digimon was getting tiresome. If this means they can let go off all the old stuff and truly start over I'm hopeful. Only thing that truly scares me is the power level meter they showed, otherwise I'm more excited about this than Tri at the very least.

The plot looks like it has been written by a 8 years old boy. Surely I'll watch this new anime, but... Digimon, the REAL Digimon franchise, died after Digimon Savers, the last great Digimon series.

I will watch it, but I'm pretty sure it's going to suck. It's obvious that they are trying to pander to the Facebook generation, which is disappointing. This seems to be Digimon only in the title.

This looks like the kind of anime I've tried to avoid all my life. I'm probably going to watch it since it's Digimon and all, but I honestly think I'm going to be disappointed despite my expectations being very low already. I don't like the idea of the App Gattai since it's DigiXros all over again and I have the feeling that this series is going to become a generic kids anime. Also, I can see why they call them Appmon but I can't say I'm a fan of this decision.
That being said, Gatchmon looks pretty cool.

oh gosh please dont make it like digimon xros wars and completely that completely ignores digimon level and lore and just fuse a digimon with other random digimons...

Hmm, the preview was ok. Digimon combined with apps, not sure it will work connectively. It reminds me of a few anime that I watched in the past, Net Ghost PiPoPa and Devil Survivor 2. The design of the main characters look decent... just noticed Haru's design looked similar to Yuya's design from Arc V. I'll watch it to see if it's good as the other digimon series. But wonder who will do the theme song of this series since the death of Koji Wada from a few months ago.

Not a fan of the app angle at all, but heck. I've watched every Digimon show, read most of the manga, and played most of the games. Many of them were met with skepticism at first, and most turned out just fine, so I'll give this a chance.

They're not even called Digimon but Appmon, so in addition to having "Digimon Universe" as the title, in my head I consider it more like a spin-off.

I cringed over the whole smartphone/apps thing at first but then I thought hey, it's such a big deal with kids and young teenagers these days and the last season has been a while so they need to attract new fans. I don't find that idea bad at all now, they could do some clever things with it.
I /hate/ Haru's design though, he looks like a million other protagonists and those colors bite, man! And his voice is awful too. He and his fat black + yellow dressed friend, man, not a fan. The girl and other boy look okay and kinda cute to me tbh, but the Digimon look more like robots than anything.><
I'm not one to hate but yeah, /very/ skeptical :/

I'll keep my expectations low for this. Sadly, I don't think we'll ever see something like the original Digimon Adventures or Tamers again.

as an avid digimon fan this sounds fucken disastrous. R.i.p season 1,2 and 3.

I get where they're going with this, and I'm all for Digimon trying new things with each new series, but I'm already skeptical about it. If this turns out to be like the Monster Strike commercial anime in more ways than one, I'm going to be pissed.

I just want a re digitize anime :(

I feel the disappointment sinking in. Now I understand those eyes my dad always looks at me with.