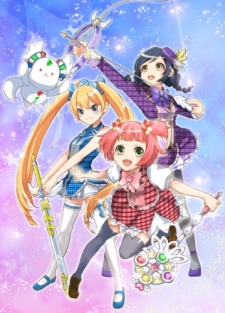 Bouncy, an animation studio founded in October 2015, announced on Friday, that it is producing a TV anime series titled Mahou Shoujo? Naria☆Girls. The series will begin airing on July 7 at 12:05 a.m. on Tokyo MX, followed by Sun TV and other networks.

Synopsis
Urara, Hanabi, and Inaho are three girls who aim to become nationally-renowned characters by creating animation of themselves! They chose the magical girl theme to catch the attention of everyone from children to adults! Can they safely become popular characters in a one-cours magical girl anime?

hmm... while the anime itself would probably be a failure, few things I'll be looking on this:
1. Stability of frame-rate & motion.
2. Level of details in expression.
3. Work Method.

Everything sounded bland to simply bad till I saw that people doing Tesagure (as well as gdgd Fairies) are behind it.
It will be most certainly not for everybody (mostly because how crazy it will be) but I think I'll enjoy it a lot.


Confirmed worse anime than Wonder Momo and Venus Project.
Should probably check who is directing this, tesugura went fine.

Don't need a lot of time to produce these kind of things.

lol, many people expect this to be bad...i do too, but i guess would be a valuable experiment for the future projects. Who knows....

Oh God, that doesn't sound good at all. Just... this is going to be so awkward :(. I'll probably be able to tolerate it if it's a short anime, but there's no guarantee.

We are all gonna die...eventually.

At first I thought that this was going to be awful. Then I saw someone mention that it was by the director behind TesaBu. Now I'm really looking forward to it.

I wouldn't be too surprised if this becomes a real-time animated unintentional documentary. I would like to compare it to a video one of Digibro's friends made about My Little Pony Season 6 spoilers where most of the "spoilers" involve mental and physical health changes of the creators. One of the spoilers was that John de Lancie would die (in real life), which isn't so much of a spoiler as it is a prediction.

My gut feeling tells me this is going to suck horribly

Looks cool but I will probably guess this is gonna be complete bullshit. :p

Man this looks like it would be fun to watch but they just had to make it 3D CGI... Won't watch if episodes are full 20 minutes, will if they're shorts.

Here's the OP of Tesagure, for reference on how meta this is gonna be since the show seems to be about itself, business as usual.

Wow, this looks like a real life scenarios turned into anime.
Still, I'm waiting to know the cast. Maybe I'll try to watch this.