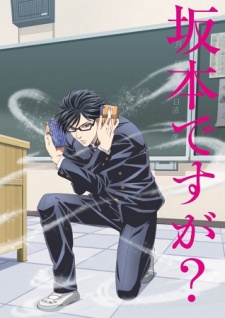 Director Shinji Takamatsu mentioned on his Twitter account that the thirteenth and final episode of Sakamoto desu ga? will not be able to air on television. This is due to news coverage of the Kumamoto earthquakes in April which caused the episodes to be delayed by one week since the second episode.

Takamatsu describes the news as "truly disappointing" because the staff had crafted the final episode specifically for television broadcast. The fifth Blu-ray and DVD volume of the anime, which will include the thirteenth episode, which will ship on October 26, 2016.

Damn that sucks...Seems like I'm going to have wait a little longer to marathon the whole series.

So we won't get the last episode until October? :(

I hope they will air episode 13 if this anime will have a rerun. But I don't know if it has an effect on Crunchyroll.

Fuck earthquakes amiright? Wasn't watching this while airing anyway so won't be too detrimental, can't wait to watch it when it ends though!

Very disappointing, but at least it gives us something to look forward to. Let's just hope that episode 12 doesn't end on a cliffhanger!

Quite dissapointing indeed, but a little bit of wait can't hurt Swagamoto must be planning a stylish endind !

Oh wow - wasn't expecting that! It's such a shame time couldn't be found in the schedule at all. Disappointing, and I assume it will affect online streaming too... But, to put a positive spin... 'Good things come to those who wait'.... ?? ^_^;;

This sucks really hard.... Now we have to wait longer for that final episode ;S..

Oh wow. So that's why it would air week after next, smh!

I love how loyal the staffs on how they animated Sakamoto from its original content,

ToG25thBaam said:
This is very unfortunate to hear, especially knowing that the staffs had something planned for the final episode. Couldn't they skip a middle episode instead? Like if they skip episode 7, they can air the last episode on TV, and just include episode 7 into the volume.
I was thinking the same way, let's just hope that they will change their minds

Knew it, poor anime are treated like trash compared to the thousands of time they air some earthquake stuff and sports shows :'(

This is very unfortunate to hear, especially knowing that the staffs had something planned for the final episode. Couldn't they skip a middle episode instead? Like if they skip episode 7, they can air the last episode on TV, and just include episode 7 into the volume.

Meh will just have to wait a bit longer for it :<

animes should really have a low priority in their airing schedule

Rezero is not delayed. It's airing was delayed in some of the channels, but it has no effect on overall schedule beyond those channels. That has been confirmed already.

Argh... This can't be happening....mmmrrgghh...Hope I can still watch it after the BD/DVD out :(

animes should really have a low priority in their airing schedule

well crunchyroll already confirmed on twitter that 8th episode of Re:Zero gonna air without a problem so i assume there wont be any delays or maybe just 1episode then cuz they cant really delay an anime for 3weeks.....

One of best showsthis season too.