The official website of Hana to Yume has updated to announce that shoujo manga Fukumenkei Noise will get a TV anime adaptation. The announcement was also made in the magazine's May issue.

The series is drawn by Ryoko Fukuyama and began publishing in April 2013. It currently has eight volumes published with the ninth volume scheduled to be shipped this month.

Synopsis
Nino, a girl who likes to sing, experienced two farewells in the past. First, with her first love, Momo, and second, with Yuzu, a boy who composes music. But upon those two farewells, she made a promise with each of them: to continue singing until they find her voice again. Time has passed, and now these three are in high school...?! (Source: Amazon)

I am so so so excited! I`m a little iffy about music manga getting anime adaptations, because the soundtrack has to be totally on point, and the fact that this manga has such beautiful art makes me a little uneasy about the character design in the anime... but hopefully the adaptation will live up to expectations.

Yes! I really love this manga! even if like there's no music playing, just by looking at the picture in the manga, it always gives me goosebumps! I Love it!<3

I can wait for the anime the manga is awesome !

I bet this anime will be amazing I just hope they get really good music for it.

I started reading the manga last night out of whim. It's quite interesting. Will definitely watch the anime! Nice!

I just found this manga, and wow~!

The only thing I may be iffy about is how the art is going to be adapted. It looks hard to keep the beauty in shoujo manga when adapting, and often seems a bit off at times mainly due to the eyes. But I'd be thoroughly impressed and overjoyed if the art is well presented and looks visually beautiful in the anime.

Now, how come they haven't adapted any of Ema Tooyama's works yet? Plz adapt any of her works so I can die happy! (T^T)9

Instant watch. I'm really excited I had my eyes on this one before.

Yaaaaaaas <3
About time that something by Fukuyama Ryoko gets adapted. 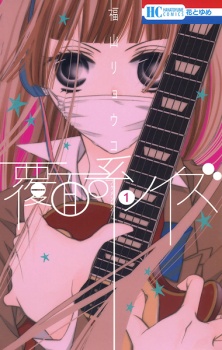 Not trying this one, ty!

Always up for more shoujo :D
And i like the character design.

A love triangle that involves pretty music? Sign me up!

Yey! Finally get to listen to the music that they're playing instead of imagining it.
n i c e.

I heard that the manga is pretty good, so I will give it a shot actually.

A love triangle, right off the bat?

Definitely will be checking out!
I was looking for new manga to read and saw this and decided to download the first couple of chapters.
Have yet to actually read them, but now I'm going to get on them ASAP.

Will most likely not feature any actual noise music, dropped

Kind of curious how the anime will turn out, and what people they'll cast.

I've read it before and it was fine. Though I'm not updated, I'll just wait for the anime then continue the manga.