'FLCL' Gets New Seasons on Toonami 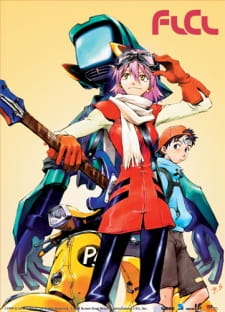 According to a Facebook post by Adult Swim, the OVA series FLCL will be getting 12 new episodes on the Toonami programming block. These new episodes will be co-produced by Toonami and animation studio Production I.G. It will serve as a sequel and be split into two seasons (six episodes each) premiering in late 2017 or early 2018 on Adult Swim.

Production I.G announced last August that it had acquired the rights to the original FLCL series, which was created in conjunction with Gainax. In addition, it had plans for a remake and other related projects. The new series will be directed by Katsuyuki Motohiro with scripts written by Hideto Iwai and character designs by Yoshiyuki Sadamoto. FLCL director Kazuya Tsurumaki will serve as a supervisor for the new series.

In the new season of FLCL, many years have passed since Naota and Haruhara Haruko shared their adventure together. Meanwhile, the war between the two entities known as Medical Mechanica and Fraternity rages across the galaxy. Enter Hidomi, a young teenage girl who believes there is nothing amazing to expect from her average life, until one day when a new teacher named Haruko arrives at her school. Soon enough, Medical Mechanica is attacking her town and Hidomi discovers a secret within her that could save everyone, a secret that only Haruko can unlock.

But why did Haruko return to Earth?
What happened to her Rickenbacker 4001 she left with Naota?
And where did the human-type robot Canti go?

The original series is about the story of a 12-year-old boy named Naota Nandaba living in the city of Mabase. His life changes one day by the arrival of Haruko Haruhara, a pink-haired female from outer space. Six episodes of the series were released on VHS and DVD between April 2000 to March 2001.

Just don't bring The Pillows back. Seriously, it wasn't just unfitting - it was cringeworthy unfitting, almost on ruining everything level.

^^ This statement is hurting my rectum.


But back on topic, FLCL is my favorite anime of all time and while I look forward to more episodes its honestly scary at the same time. I mean its perfect enough as it is (IMO), and it will take a lot to make this work.

In the end, if it turns out to be shit ill just pretend it doesnt exist, so no biggie.

Wow, amazing news and I seem to be really late to hear about it! I am cautiously skeptical that they can make new stuff live up to the original but since it's anime and not hollywood movies I will wait and see.

Ualraig said:
Just look at Darker than Black. Kuro no Keiyakusha was a master peace of a show with real characters and the characters acted like people. But then 2 years later Ryuusei no Gemini came out and it was shounen rubbish, A decent anime on it's own but a complete disgrace to Kuro no Keiyakusha.
You've done a lot of terrible, unforgivable mistakes. I fixed it for you, but you'll better be bloody careful in the future.

We should take these new seasons with a grain of salt. Just remember, FLCL was a symbolic anime about coming of age, and the anime had achieved it's goals with in the first season. We need to think "Does FLCL need another season," and the answer is no, It ended fine. Now a new season could be good but it is not needed. Just look at Gunbuster. Gunbuster was a master peace of a show with real characters and the characters acted like people. But then 16 years later Diebuster came out and it was moe rubbish, A decent anime on it's own but a complete disgrace to Gunbuster. I feel that people just want another thing of something they like but not everything need's more, especially if the first was amazing. Just look at the New Powerpuff Girls.

The Pillows for OST or riot.

Wtf? That anime is horrible and disgusting.
I droped that shit.

I love love love FLCL. I have been left hungry for more for many many years now. I can't wait for this.

Please the pillows. Make a legendary OST once again!!!!

As long as it strays away from the awful comedy the original had, it will probably be fine.

FLCL was such an important show for me during my adolescence, I'm really curious to see how these new seasons turn out.

Talk about a depressing atmosphere here.
I don't see any worries with a sequel, da hell, I would even say I embrace it.

It would be neat to see something similar to the FLCL traits or just see what they can mix into the dough to maybe create a new unique flavor.

I do get the feeling though that if someone takes my favorite mouthgasm cookie recipe and dips into an unknown source of dip sauce I would probably get the chills.

We don't know what it's like until we taste it.
Whatever they whip together in that studio they can't take away the original taste to FLCL. That's final.

kitsune0 said:
No-Look_Kuroko said:
eh nolstagia literally means "a sentimental longing or wistful affection for the past, typically for a period or place with happy personal associations," so it kinda pertains directly to passed years.

I think the point was that you were calling my music taste childish ("you'll grow out of it") and we could all do without that kind of negativity. If you can't say anything nice, then don't say anything at all.

As someone who absolutely adores FLCL I have very mixed feelings about this.

Clebardman said:
POUAH! It's getting worse with every post.
You're still tsundere for me, sempai? Awww, it's so sweet! Go on, continue.

kitsune0 said:
I was a huge fan of Shoujo Kakumei Utena 0ST in my early years, now I know better.

TomokiPrice said:
Just so long as the soundtrack is done by the Pillows again I'm cool with it.

I'm hoping for more Pillows too. They are pretty great.

I'm not sure quite how I feel about the show though. Yes, I'm pretty interested. I loved the original and I still have my old DVD box set from when the show was licensed by Broccoli USA (lol). I just hope that 12 more episodes doesn't ruin the magic of the short, sweet, and random original.

No-Look_Kuroko said:
eh nolstagia literally means "a sentimental longing or wistful affection for the past, typically for a period or place with happy personal associations," so it kinda pertains directly to passed years.

I think the point was that you were calling my music taste childish ("you'll grow out of it") and we could all do without that kind of negativity. If you can't say anything nice, then don't say anything at all.
Yes, I know what "nostalgia" means, I mean - it's irrelevant to how much years passed, you can feel nostalgic about events that happened less than a year ago.
Not childish. Undeveloped - may be, but bear in mind that having just a little experience in any field is not a bad thing or something you should be ashamed of. Me, for example, - I was a huge fan of Shoujo Kakumei Utena 0ST in my early years, now I know better. And again, notice that I've never said anything bad about The Pillows, on the contrary - I praised them. No negativity here. Sorry if it comes out as something aggressive. Are we cool?

Not really getting my hopes up for the show but at least we're probably getting some good tunes.