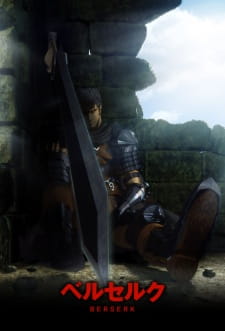 The seventh issue of Young Animal magazine of 2016, which will go on sale on March 25, has announced production details of the upcoming Berserk TV anime. The series will air from July 2016 on the Animeism programming block of MBS and its affiliated networks, as well as on the WOWOW network.

I don't really care about the animation... as long as I get some Berserk.

LayedBack said:
You know what I don't get, where is the fucking respect? This series should be done by Madhouse or somebody else, perhaps even just round up the top talent in the entire industry. I mean its Berserk for God's sake!

Even worst though is the CG. This manga is like a national freakin' treasure for Japan, and here they are taking another giant shit on it. I mean its just really, incredibly obnoxious.

As another user on Reddit explained it to me, there's simply not the money to do it. No big donors with good tastes, and Berserk doesn't have the demographics to draw in huge BD sales. If anything, this anime is to test the waters.

Same VAs from the films, as expected.

If that 24-episode length rumour is true, then fuck.

Dylan21 said:
Confirmed to be 24 episodes (on Hummingbird it's listed as that): http://fansubdb.com/wiki/Summer_2016 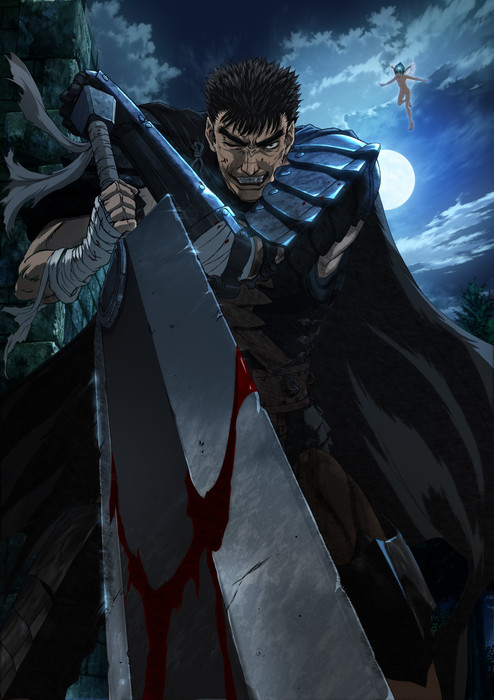 You know what I don't get, where is the fucking respect? This series should be done by Madhouse or somebody else, perhaps even just round up the top talent in the entire industry. I mean its Berserk for God's sake!

Even worst though is the CG. This manga is like a national freakin' treasure for Japan, and here they are taking another giant shit on it. I mean its just really, incredibly obnoxious.

I think I'm giving up on this already. CG animes never work for me.

JUST MAKE A PROPER SEQUEL TO THE ORIGINAL 1997 SERIES! God, it's not that hard!

Oh boy this is going to suck...At least I have other shows to look forward to for the summer.

thepath said:
The chance of Berserk being bad is zero. CGI or animation is not what makes any good or bad. It is the story, characters, settings etc

Also, Berserk movies CGI never bothered me at all. The visuals looked fine to me

the chance of berserk being bad is 0? hahahaha nice joke. you people take animation too lightly if you think it can't make things good or bad. want an example? i will give you an example that animation made anime better than manga. HxH 2011. anime > manga. undeniable fact. the drawn of manga is mediocre at best and not even half as good as berserk is, but the epic 2D animation from Madhouse made the crap drawn manga look epic in the anime. want an example that bad animation made the anime worse than the manga? One Piece. animation can easily make an anime good or bad, and now a days animes are rated based on animation too. if animation of Berserk is bad, it won't even be able to draw half % of epicness the manga has

CGI on movies was horrible

Confirmed to be 24 episodes (on Hummingbird it's listed as that): http://fansubdb.com/wiki/Summer_2016

Dylan21 said:
Very weird staff, expectations are really low going by it. They don't suit it at all, seems like a staff listing for some SoL short rather than a bloody action series with epic fights and amazing art (well at least it's meant to if they adapted the manga properly with a high budget). Previous PV looked like shit but still promotional pictures they've used look great. 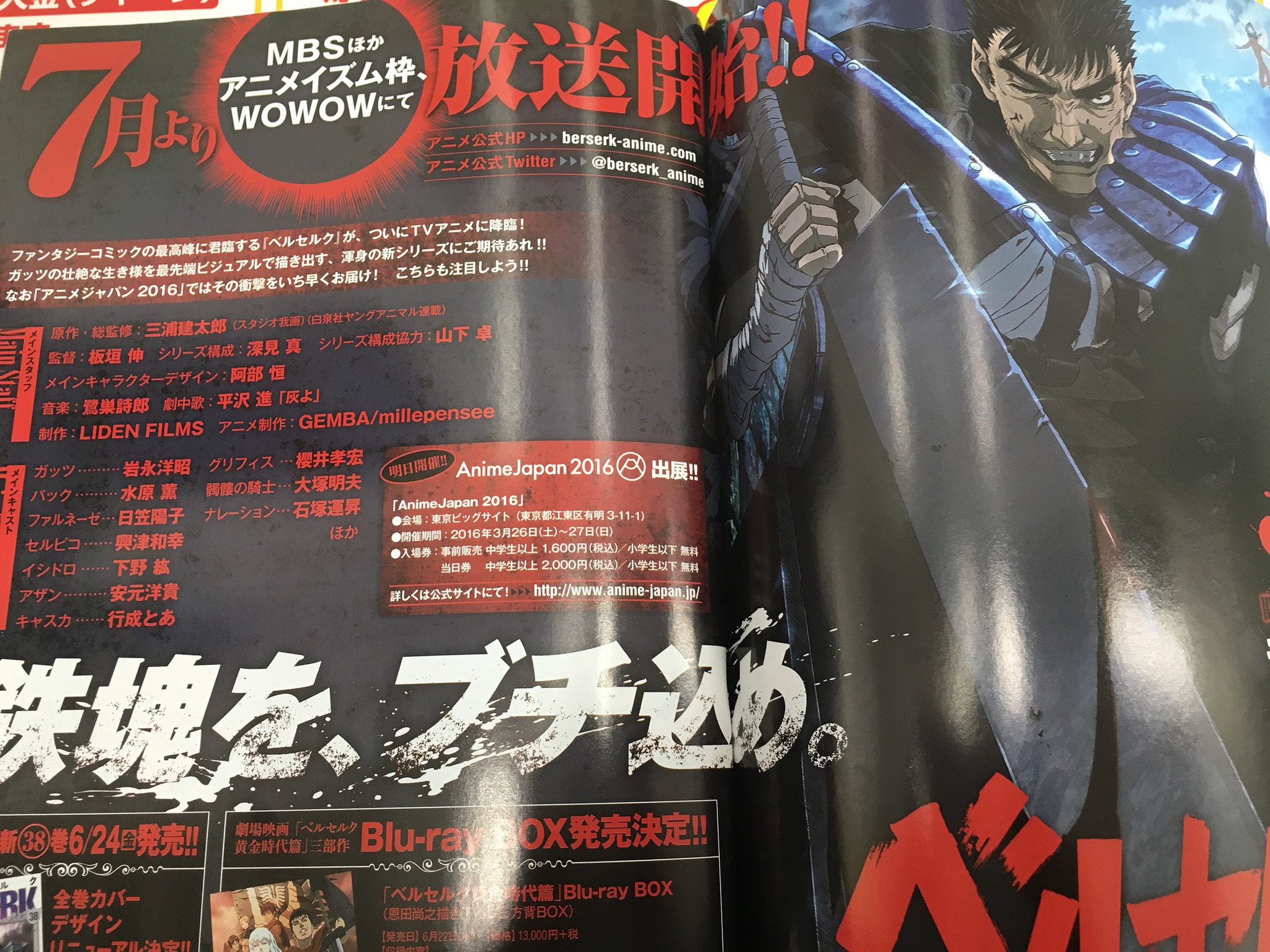 That looks pretty nice but I don't think anything can make me think this will be that good anymore.

edge13 said:
Confirmed 24 episodes by German source: https://animania.de/news/anime-deutschland/universal-pictures-holt-sich-den-schwarzen-ritter/
OMG! This is happening! The berserk adaptation we never asked for.

Berserk already has three butchered adaptations if you take a look at the CG laden films. Why couldn't they take a page from the original adaptation and do it right? I mean, the staff don't seem to suit the job at all, and what's more... CGI again?

Ok, I've been absent for a long time from the forums and I didn't really follow news about new shows...I saw the promo after I ranted a bit on the sequel to FLCL...I was ticked off at that...but now I am entirely pi**ed. They ruined it pretty much with the movies and now they want to f**k it up entirly? Why, WHY so much CGI? It looks horrible! I know there are a lot of shows that have badly incorrporated computer graphics (to the extent that the characters themselves end up looking like flat pieces of paper) but this is ridiculous.
Berserk is probably my favourite manga and I've been kind of waiting for the rest to be made into an anime. But I've barely made it through the animation in the movies, and I'm not sure if I will be able to stomach a whole series. I know that the visual isn't the only point to consider (and I tried to ignore it in the last movie as much as I could), but heck, if it's going to be as bad as in the promo, f**k it. And by looking at the list of people involved, I am not quite sure the show's going to have a happy ending...
But, nothing is certain in this world and it could be that not "that much CGI" was used and that the show will turn out fine...I just hope they don't massacre it all the way.

P.P.S. @Stark700 Akio Ootsuka was also in Ougon Jidaihen, so how come you used F/Z?

Also, Unshou Ishizuka was in the original series, although he voiced a different character. Still, I would expect fans of Berserk are more interested in returning cast members than they are that those cast members happened to play some character on another show (however famous it may be), so I feel like Unshou and Akio should both be corrected to reflect this (perhaps with Unshou's stating "as Void" to clarify the difference in character?


Stark700 said:
quote for poke unless you have that feature turned off like an intelligent forum-goer

Every news about this adaptation is bringing my expectations lower and lower.

thepath said:
The chance of Berserk being bad is zero. CGI or animation is not what makes any good or bad. It is the story, characters, settings etc

Also, Berserk movies CGI never bothered me at all. The visuals looked fine to me

Yes, but the Berserk movies were rushed and left out a ton of stuff. Important character moments, for one.


As people have said already, at least LIDEN FILMS has experience with medieval/fantasy series: Arslan.
Their CGI was terrible, but I guess we're already used to the awful CGI, thanks to the movies. That'll never change I guess...

They're mostly going with the movie cast, but as for the new characters, I'm pleased with the casting for Farnese(great seiyuu) and Serpico(Jonathan Joestar and Andre from Prison School, the guy has range). Isidro's is okay I guess.

People keep making fun of the guy who directed Teekyu, but he also did Basquash and Ben-to. And he had a hand in Panty & Stocking, Gurren Lagann, and the Lupin: Fujiko Mine anime. Despite Teekyu, he has talent and he's experienced. In fact, the guy was fired from Basquash, and that's when the series went downhill. Before that Basquash was extremely well-directed. Ben-to was very creative and stylish, as well. For now, I'll give him a fair chance.

As for the series comp. the guy did the first season of Psycho-Pass(along with Urobuchi I guess?), and Psycho-Pass S1 was good. Unlike S2.

Despite the CGI and those other animation studios I haven't heard of, I guess I'm okay with the staff. They could be a lot worse. The CGI has the potential to kill it, though.

I wonder what kind of criticism they get in japan about this cast revealing. Honestly with stuff like this I'm always curious what the japanese think.

This is gonna make Dragon Ball Super look like HxH 2011.

Sorry but Japan cant make CGI work, only Murika can(Look at Beast Wars with primitive CGI and was probably one of the best transformers series):