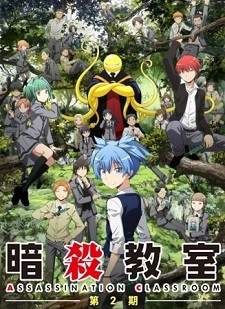 Anime shorts of Ansatsu Kyoushitsu (TV) 2nd Season were announced on Monday to adapt chapters of the manga which have not been aired in the anime series. The shorts will be streamed online under the subtitle Kagaijugyou-hen ("Extracurricular Time").

Streaming content portal dTV will release four episodes of the five-minute shorts every Friday beginning March 11. They will adapt chapters 78 ("Takebayashi no Jikan") and 79 ("Shihaisha no Jikan, Ni Jikanme"), which are published in the ninth manga volume.

Earlier this month, director Seiji Kishi revealed in an interview that the second season of the anime adaptation will follow the ending of the manga.

Nice way to adapt the skipped chapters from the manga.


But if I'll watch that, it will somewhat gonna spoil the manga.

Pretty good way to fit in the chapters not adapted in the main series.

Oh good, it won't be as rushed.

Makes sense since they're going to have to cut out a lot of stuff to fit the rest of the story into the anime. At least we know we'll get to see that stuff.

Nice to see that they'll adapt whatever they've missed.

Sounds great, I'm glad they're going after more of the material. Will tune in.

Nice, they really want to adapt every thing possible for this series. Always been enjoying the comedy of Ansatsu Kyoushitsu so I look forward to it.