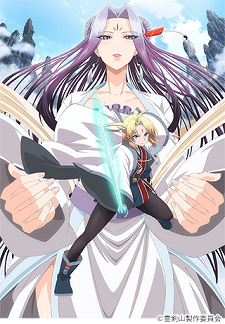 The official website of Studio Deen announced that it is producing an anime titled Reikenzan: Hoshikuzu-tachi no Utage for TV broadcast. It will air from January 2016 on Tokyo MX, Sun TV, Kyoto Broadcasting System, TV Aichi, and AT-X.

Reikenzan is adapted from the Chinese online fantasy novel Congqian You Zuo Ling Jian Shan (Once Upon A Time There Was A Spirit Sword Mountain), which has been publishing since August 2013. Written by Guowang Bixia, whose name literally translates to His Majesty the King, the story is currently in its 13th volume. An online manhua adaptation has been publishing since August 2014 and has 270 million reported views.

Tencent, the Chinese Internet company which owns the online portal QQ.com where the novel is published, will participate in the production of the Reikenzan. The novel's listing on QQ.com indicates that the story is at times serious, and at times comedic. A Mandarin Chinese dub will also be produced for broadcast in China.

Synopsis
Since its founding in the year 4233 of the Nine Provinces calendar, the spirit sword clan has been producing first-class martial arts talent. Two thousand years later, the clan, which adheres to the principles of peace and spiritual development, seeks to find new disciples by holding a grand tournament. One of these candidates is 12-year-old Wang Lu.

TheNaturalPerm said:
From the mastermind that brought us 'Training with Hinako' and 'DearS'.

I am hyped up as fuck... not for the anime inself as for the fact that is a chinese adaptation.... there some really good stories out there made by chinese, and some really awsome koreans ones... If Japan, would show interest in those, the anime industrion will rise on a new level...

The character quite good.wonder how good the animation is.

Chinese novel? I hope korean webtoons are not that far off.

The visual looks nice...
Hmm, I might take a peek but the story feels like stuff I've seen before.(not that it's a bad thing, to me anyway)

I will definitely be checking this out.

Not sure if I want to even try. Though it is interesting they are using utaite for both OP and ED.

alpha_shadow said:
3 anime from deen in the same season???

Hopefully they all flop (most likely) and they go bankrupt. (EVIL, I know)

I mean... ruining an IP that Tencent holds will REALLY screw a studio.

They are just fucking huge.

Interesting to see whether Deen can pull this off decently.

tblader said:
Don't have very high hopes for this
Giant Killing was the only quality to come out of Studio Deen.

just from the few I've seen from them.

I am excited
I will make this my first Deen anime

Don't have very high hopes for this
Giant Killing was the only quality to come out of Studio Deen.

>hating on an anime before it comes out because studio has some bad shows
''MAL quality'' DEEN has done some great adaptation, and its just funny that the people hating on it were loving it when fsn first aired, humanity please.

Lil-Bird said:
Checking it out just to see that DEEN quality.

Can't find it, but I wanna watch this Chinese light nivol shit.

Deen is on a roll.

DEEN... Probably going to regret this but I'll try it.