Director and Studio of 'Koe no Katachi' Movie Adaptation Announced 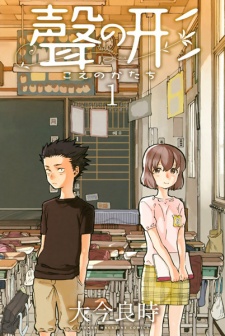 The 46th issue of Weekly Shounen Magazine, which will go on sale on October 14, revealed that the previously announced Koe no Katachi anime movie adaptation will be produced by Kyoto Animation. It will be the studio's first production of a movie which is not already part of an existing anime franchise.

Naoko Yamada (Tamako Love Story) will direct the movie. The award-winning manga series, which uses themes of bullying and disability, was written and illustrated Yoshitoki Ooima. It was originally published as a one-shot in February 2011 and was later serialized in Weekly Shounen Magazine between August 2013 and November 2014.

Kodansha Comics USA has been publishing the manga in English since May 2015, and the series is also simultaneously published online on Crunchyroll Manga.

Oh my goodness! This is an extremely late reply, but I was scrollin through upcoming anime on the site, and saw this title when I thought it sounded very familiar. Having read the manga and bawled my eyes out, I have extremely high hopes on this movie being emotional and awesome!

Definitely looking forward to this. Would still rather have an anime over a movie, but I have faith that Kyoto Animation will do it enough justice.

Been hearing a lot of good things about this series so i'm very looking forward it.

Oh this is good news.

Good it's going to be a movie instead of tv series. Hopefully it's heavily based on the one-shot because I feel some parts especially the latter ones of the manga are kinda underwhelming. I'm also fine if they make an original ending that does not suck as the manga ending is not conclusive enough and rushed.

Seems like the kind of anime that will make we cry...

Now THAT is a nice surprise! I didn't expect KyoAni to be doing something like this at all! Although they are getting less and less moe with regard to their storylines (Tamako Love Story, Hibike! Euphonium, Hyouka). Great news! On the PTW list it goes!

Bought the first three volumes of the manga to get ready for this :)

I have faith in KyoAni, especially since this is the woman who directed the amazing second season and movie of K-On!, plus I hear Tamako Love Story is very good. Have faith guys, maybe a TV series will come after this?

This is the best news. Not only is it the type of material that perfectly fits Kyoani and Yamada, its something that'll further expose them to the mainstream public. Nothing would make me happier than to see Yamada's talents as a director recognized by a bigger audience.

This is an huge opportunity, and I sincerely can't wait. Expecting good things.

zeroyuki92 said:
Just want to remind people that KyoAni only significantly changed the artstyle of the materials when it's a material from their own property (a.k.a almost everything recently) or some which absolutely needs it anyway (Hyouka). On established materials? No, I believe they keep the essence of design at Nichijou or FMP. KEY adaptation is already moe to begin with.

So don't create assumption from uninformed speculation.
After a brief research, I've found that what you said is true. Chuunibyou, Kyoukai no Kanata, and Free! all belong to KyoAni. Most of us didn't know that, so thank you for the info. Correct me if I'm wrong, but it seems neither Amagi Brilliant Park nor Hibike! Euphonium are owned by KyoAni, yet the character designs are very KyoAni-like. Granted, the art in ABP's manga is mediocre, and the LN illustrations could easily be tweeked to look KyoAni style. I guess the more obvious one would be Hibike, I remember seeing the art that went with the TV anime announcement, and then seeing the difference between that and the key visual for the anime when it came out. But I guess this goes along with what you said about established materials, in which Hibike probably wasn't (idk).

Anyways, it doesn't change the fact that they like using that similar style. Other studios that have original anime always try something new, which KyoAni doesn't. Whether that's good or bad depends on the person, but I don't think there's harm in assuming that KyoAni will change the artstyle when they've kept with their typical character designs, even when they don't have to.

kyoani is probably going to completely revamp the art style and ruin it.

Just want to remind people that KyoAni only significantly changed the artstyle of the materials when it's a material from their own property (a.k.a almost everything recently) or some which absolutely needs it anyway (Hyouka). On established materials? No, I believe they keep the essence of design at Nichijou or FMP. KEY adaptation is already moe to begin with.

Wow. KyoAni is doing Koe no Katachi. FUCK YES. This is one series that I do not mind being milked on. Keep on making OVAs, recaps, sequels, etc.

I'm thinking KyoAni doing this makes the chances for a follow up series possible if it does really well. It's just the reverse of their recent milking formula.

Though, I don't think I've ever seen that happen before so..

OMG kyoani... that was unexpected!

-Katsu-kun- said:
FireEmblemIke24 said:
marcellzzz said:
are they gonna adaptated the manga till the end?

Yes they probably will if they condense all the events.

I can see it working if they remove/alter the minor scenes such as other characters' development within the series.