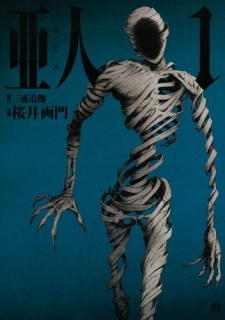 Gamon Sakurai's horror manga Ajin has been announced for adaptation into a TV anime in Winter 2016. The manga was previously announced to be adapted into a film trilogy, with the first part scheduled for November 2015.

According to the news release, the TV series is produced to represent the original work more precisely. The manga follows high schooler Kei Nagai, who becomes an immortal demi-human (ajin) and is hunted by the government for experimental purposes. In addition to the TV broadcast on MBS, TBS, and CBC, the series will be streamed on Netflix, which began its service in Japan on September 2.

Glad to see more horror in the anime mainstream. Thank you, Tokyo Ghoul, for opening that door up. Maybe the CG will work.

Mr__Wolf said:
MaxXZoe said:
Stark700 said:
Avok said:
It will be by the same studio?

so we are getting 3D/CGI ajins? still a watch though
Sidonia had terrible CG though.

Sidonia CG looked weird to everyone because it was trying to keep Nihei style.

MaxXZoe said:
Stark700 said:
Avok said:
It will be by the same studio?

so we are getting 3D/CGI ajins? still a watch though
Sidonia had terrible CG though.

This looks interesting. I'll check it out.

This is gonna the most popular shounen anime of 2016 because it will be the same amount of hype like Tokyo Ghoul.
ah good old elitist making assumptions early on, never gets old.

The studio, cast, and staff is the same as the movie for the TV adaptation?!
I don't like CG, but I love this manga so much, so I will watch it.
I hope TVs is 24 ep and 2d

everyone main question is Movies AND TV ?

they should do the same thing they did with Sidonia if they do both.

Is that you Ennis?

and yes it will be in CG

Can't wait, i've been hearing a lot of good things about this series.

Cant wait the manga is so good

That's sounds interesting. I will look forward to it!

Is that you Ennis?

Gooooooooood. We dont have to wait for the movie to come online.

so we are getting 3D/CGI ajins? still a watch though

Hard to 100% say for now but likely. Here's promotional PV to judge: