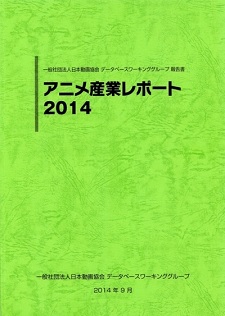 The Association of Japanese Animations (AJA), in its annual industry report scheduled for publication on September 18, reports that the global anime industry recorded double-digit growth in 2014. The report estimates the anime market grew to a high of 1,629.6 billion yen in 2014, compared to 1,491.3 billion yen in 2013.

The AJA is the industry association acting for animation studios and individuals involved in animation. Past editions of its annual industry report (2014 edition pictured) are available for free download in Japanese and in English on the group's website.

fredchickens said:
Now, if legal sites can only stream their animes GLOBALLY and not REGION-RESTRICTED,maybe it can increase a dozens of times.

You know they can't do that, they'd have to buy a license for each country...

Lol did anyone ever argue that the anime industry is not profitable? I hate capeshit. Doesn't mean Marvel is not making lots of $.

Profits and quality rarely have anything to do with each other. Harry Potter: deathly hallows made more money than Das Boot. Watch both and decide which one is a classic.

lol! am no longer paying attention to the "experinced" otakus anymore.

no doubt SnK helped with some of the cash, though.

GREAT news! How I wish they pay the animators a bigger salary for their works.

Great news is great :D
I wouldn't be watching Anime online if I have the money.

Kaioshin_Sama said:
*whines like a 5 year old kid who got spinach for dessert incessantly*

I respect old anime too, but what I don't respect is this oppressed attitude you have towards the newer crowd as well. From what I can gather, you are the epitome of those Miyazaki/Anno memes only taken too seriously.

Seeing you wanted to call out me in particular since I have a Love Live (a show's success you detest) avatar, this reeks of mere displacement :)

Zapredon said:
Does anyone know what anime is popular in China? Any Chinese here?

Whatever like 3-4 anime the government didn't ban I guess.

Subpyro said:
Jonesy974 said:
This is a nice fat cock in the mouths of all the people whining about the anime industry saying it's dying and a failing industry.
I died reading this.
Haha, glad you liked it.

I'm just glad the meaty schlong of truth was able to blow a hot sticky load of reality down the throats of the naysayers.

you are the only one using them

Thank you cause it's so true, it's like the first fucking reaction spiteful people have towards this news, almost as if they were chomping at the bit to be the first to make uninformed statements and feel important and like they're sticking it to someone which I take it is how you "win" on the internet. Somehow like people always managed to do they've completely parred down rather complicated issues of financing and revenue to something simple and kind of stupid and petty that they can understand, those largely out of context quotes from Hideakki Anno that even he's said came across wrong. Also people are completely out of their minds if they think Hideakki Anno wants or is somehow willing the animation industry to die or whatever crazy ideas they have running in their heads cause if people even attempt to read the things he's actually said it's completely the opposite and he's concerned about the potential decline of Japanese animation which has far more to do with just issues of financing though that is something he brought up.

See I hate this because now you're going to have these idiots beaking off about people arguing that the industry is struggling and entering a transitional period cause they just assume shit, figure everyone is as childish and petty as they are (see again Hideakki Anno) and forever hear what they want to hear and see what they want to see. The big thing people don't realize is this is all inclusive for animation, character content and sales for Japanese animation companies which I believe includes things like Walt Disney Japan's record breaking Frozen release among other things as well as emerging overseas markets. Realistically movies and general public stuff as well as international content and most importantly enduring and established character brands like Anpanman, Hello Kitty, Sazae-san, Gundam etc carried animation in Japan's ass last year as it does pretty much every year, not so much whatever pet light novel series or whatever people probably think it was though they're included in all of this too. Still people keep talking about what they want to believe and hearing what they want to hear, in the meantime I'll just continue to take that extra step into looking behind the basic news reports but the reality is this stuff is a lot more complicated than people's petty bullshit and Hideakki fucking Anno.

Anime today is looking more and more like anime 20 years ago. We brought back UC with Unicorn, Dragon Ball IS back, Lupin is coming back, we're bringing back Digimon 01, we're two years away from a LOGH remake, and those are just the ones I remember. (Just remembered there's a Saber Marionette thing happening too lol.) And I have this strange feeling that between now and 2017 we'll get more revivals of old shit.

See the part about people hearing what they want to hear and seeing what they want to see. I've actually enjoyed this trend a lot, it's probably actually the one thing keeping me still interested in anime into since it's nice not to feel forgotten. Whatever bizarre spite people have against older fans which is probably just something stupid they made up to give their insecurities a face and identity I just chock up to them being loudmouth idiots commenting out of spite as some of those titles like Unicorn and Yamato have certainly helped a lot and are quite lucrative and critically acclaimed at large.


TornadoTheDragon said:
I'm not sure but people have posted that the sales from the 80's to 2000's was greater then it is presently. Is that true? or is the animation industry recovering or has it gone past its sales records from over a decade ago?

Different would be closer to the truth. Anime has gone through many business models and strategies over the years with certain markets and demographics ebbing and flowing, like would you believe there was once a time where producers and sponsors stubbornly believed that anime was for kids only and never young adults and up and than the only possibly viable business model was one revolving around toy making and daytime programming. Recently the industry also seems to have remembered that there are more potential markets than just the hard core male otaku one and has been using the OVA and film Formats to try to reach back out to them. This is more what folks like Anno and co were trying to get at with their comments that anime can't all just be about pretty girls and that animators ought to be trained at animating more different kinds of things so as not to fall behind emerging animation trends in Korea, China, France and the United States. He's more worried about Japan losing its recognition as a big country for high quality and internationally acclaimed animation which is a pretty separate issue but far be it from most people to understand or grasp that since again it doesn't conform to what they want to see and hear.

Basically it's good that the animation industry there continues to have its financial legs but it hardly helps the plight of the animators and there techniques and talents and god help me I just don't want to have to hear it from petty fools who have little idea what they are talking about and just forever simplifying everything.

As far as legal international streaming goes, if you're paying attention at all whatsoever you will see that the industry is working on it. As a subtle hint look up at the top of the page.


At what level does the average MAL user attain the abbility to detect sarcasm?

It's actually an optional perk but most people opt for the belligerent shit poster that likes to keep things the simplified and obnoxious as possible branch. See to me it's super obvious but we'll you know.....


fredchickens said:
Now, if legal sites can only stream their animes GLOBALLY and not REGION-RESTRICTED,maybe it can increase a dozens of times.

No it doesn't work that way....like at all. Anything you just said really.


Acclaimed anime director Hideaki Anno has revealed his growing concern over the current state of Japanese animation in a recent interview with Russian news agency RIA Novosti . In this interview, he makes the bold statement that anime is "losing its spark," and after it has run out, will likely give rise to something newer.

His fear stems from his opinion on today's system of anime production. He worries that as it is now, this era of anime will barely last another five years, citing apprehensions over a looming potential loss of both funding and human resources.

However, he goes on to point out that anime, while having its base in Asia, is "headed towards a good place." He is confident that anime will continue elsewhere in the world, but still fears its imminent demise within Japan over the coming years.

Just cause I tire of this shit here's an excerpt from the earliest report of the infamous Anno comments people don't seem to understand. It's interesting that he points out the Asian base and comment about it being "headed towards a good place" because if you look at the contents of this report and their findings it kind of seems like the things he predicted might come to pass are sort of showing signs of being the case if it is true that China played a major part in the 10% growth. All signs point for the domestic state of anime actually being down from 2013 but because of the growth in China it was negated and turned into a growth.

This is again why I say some peoples continuing desire to try to stick it to Anno and "the haters" shows a gross misunderstanding and simplification of the facts owing to people on the internet's tendency to turn every single think into an us versus them zero sum scenario.

Anime today is looking more and more like anime 20 years ago. We brought back UC with Unicorn, Dragon Ball IS back, Lupin is coming back, we're bringing back Digimon 01, we're two years away from a LOGH remake, and those are just the ones I remember. (Just remembered there's a Saber Marionette thing happening too lol.) And I have this strange feeling that between now and 2017 we'll get more revivals of old shit.

I'm not sure but people have posted that the sales from the 80's to 2000's was greater then it is presently. Is that true? or is the animation industry recovering or has it gone past its sales records from over a decade ago?

Now, if legal sites can only stream their animes GLOBALLY and not REGION-RESTRICTED,maybe it can increase a dozens of times.

Does anyone know what anime is popular in China? Any Chinese here?

Yay! That is really great news.

In your face, Anno.

you took the bait, gg