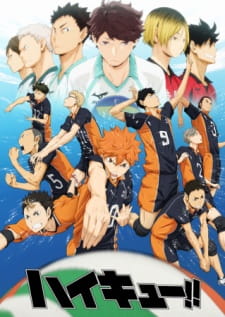 According to the 39th issue of Shueisha's Weekly Shounen Jump magazine, sports manga Haikyuu!! will receive a new episode set after the first anime season at Jump Special Anime Festa 2015. Works serialized in Shounen Jump magazines will be exhibited at the event, to be held November 3–15 in nine cities throughout Japan.

Haikyuu! previously received an event anime at last year's Jump Festa. Production I.G adapted the manga into a 25-episode TV anime which aired from April to September 2014. A second season is scheduled to premiere this Fall. A recap movie opened in theaters in July, with a second scheduled for September.

Yes...I really wanted a second season of this anime...:3

Has anyone figured out what this one's about? The nekoma ova was really good ;3

now this is the news Ive been waiting to hear

The ova that they made in 2014 was really good, can't wait to see what happens in this one ^.^

Eee! I'm so excited! Anything Haikyuu!! related just makes me so happy I could float.

I´m so hyped!!!
I want a Fukuroudani or Seijou ova but... it´s something~

I'm damn hyped for this!

Can't wait for the 2nd season to start airing, I hope it lives up to the first season ^-^


vodall said:
No surprise, but I still have no idea why this series is popular.
It's good.

Neat, it would be great if it was about Seijou.

A new episode and I assume no recap! Well really good news :)

I've still yet to see the Jump Festa 2014 special :P Both will be a good addition to season 2.