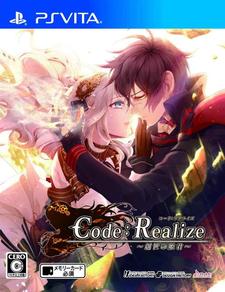 Idea Factory has announced that otome game Code: Realize Sousei no Himegimi (Code: Realize ~Guardian of Rebirth~) will receive an anime adaptation. The announcement was made at the Otomate Party 2015 event where 12 different games were announced. The type of anime the adaptation will be is unknown at the moment.

Code: Realize Sousei no Himegimi is a visual novel game designed for otome players and was created by Idea Factory and Design Factory. In the game, the player assumes the role of a beautiful young woman with the ability of a deadly touch. The story details her adventures as she meets five other male characters and discovers the truth of her past.

The game was announced for the PS Vita platform last year in Japan, and it is scheduled to ship to North America and Europe this fall.

Synopsis
Cardia has a deadly poison residing in her body, and as a result, gets called a monster by others. One night, she meets a mysterious man calling himself Arséne Lupin, who leads her to Industrial London. From there, she meets various people uncovering the truths and real stories behind the strange people and land, in an attempt to recover her memories and search for her father who holds the keys to her memories in London. (Source: VNDB, edited)


I can already hear the fangirls

Im actually looking forward to this alot! I played the game, it was really good and if they do it right, it should be great!
...
But then again Idea Factory made Mars of Destruction.

Hope they keep the cast from the game. That's an impressive list. If they do that and flesh it out well, it will definitely be a hit!

I don't know anime well enough to get the jokes about this studio, I'm gonna watch it for the seiyuus lol.

That synopsis is odd, damn I'm confused, will add though 😎

Kewl, it's been a while since I've watched some silly reverse harem series. I'm in ʕ•ᴥ•ʔ

kazykoki said:
Hope they keep the cast from the game. That's an impressive list. If they do that and flesh it out well, it will definitely be a hit!
don't worry, they usually do. the only time i've seen things switching seiyuu is from drama cd to anime :P

Hope they keep the cast from the game. That's an impressive list. If they do that and flesh it out well, it will definitely be a hit!

I think I just witnessed over 10 comments in a row sarcastically commenting on Idea Factory handling the funding/production of this OVA/TV Series/Movie whatever it's going to be. Amazing.

In any case, I've heard really good things about this VN in terms of characterization and story so I'll look forward to it. Hopefully it's not going to be another Diabolik Lovers which was a bigger catastrophe then I could imagine (almost 0 game plot mostly just fanservice).

watching this!! I've sold my soul to IF already..

Wasn't too big on following the game, but I guess I'll give it a go because of the synopsis.

vodall said:
why is it considered OK if F/SN (an eroge) gets adapted but this is immediately labelled trash?
Eroge vs Otomoge that was Made by Idea Factory, a low budget company that has embarrassed themselves in the past

Will watch for bishies.

Oh boy not this shi-

YES!!!! This will be great, can't wait. Their trainwreck factor is unrivaled.

Oh god yes! This is beyond hype.