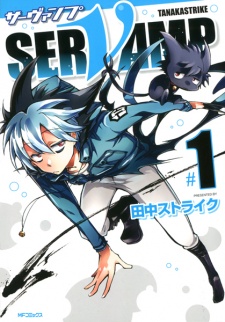 It was revealed on the latest cover of Kadokawa's Monthly Comic Gene magazine that vampire shoujo manga Servamp will be getting an anime adaptation. The series is both written and illustrated by Strike Tanaka and began publishing in June 2011. It is serialized in Comic Gene magazine and has seven volumes, six side-stories, and three drama CDs as of July 2015.

Synopsis
The story revolves around a 16-year-old boy (15 at the beginning of the story) named Mahiru Shirota who likes simple things and dislikes difficult things. One day, he picks up a stray black cat he finds in the middle of the road and gives it the name Kuro (which literally translates into "black"). From this moment on, a contract between the servamp Sleepy Ash and Mahiru is formed, and Mahiru is pulled into the Servamp war between the seven deadly Servamps and their eighth sibling Tsubaki. (Source: Servamp Wikia, edited)


Update July 15
Cast members were announced via the official Twitter.

Not to say that this would likely compare to the atrocity of that series, I'm still skeptical of this combination.
\
I READ THE MANGA!!! NOTHING LIKE THAT!!!! O!O

Nisx said:
Add to my plan to watch list,
though i hate vampires..... :X
I HATE vampires too but i needed something to read so i read this manga and OMG your hate for vamps will dim because this isn't just some normal vampire story this is totally different and it looks shounen ai but its not really. I recommend this anime/manga for anyone who likes anime! ;)

Cool, manga is being published in my country so I'll check out this series with pleasure, the artstyle looks pretty good.

Actually looking forward to this one. *excited*
I've heard great things about the manga and it's also published in one of my favorite magazines.

This series caught my eye for a while now ever since i saw it in bookstores up in France, so i'll be checking this out.

Didn't know it was a shoujo though o_0

I know what to do now.

I'm glad that they are the same as Drama CDs.

Edit: I just realized, except for Shimono-san, rest of the casts so far are G.Addict minus 1!

News Update
Cast members were announced via the official Twitter.

I'll watch it for sure.

Synopsis
The story revolves around a 16-year-old boy (15 at the beginning of the story) named Mahiru Shirota who likes simple things and dislikes difficult things.
Same, buddy.

Anyways, a friend of mine recommended the Servamp manga to me a long time ago, but I never did get around to reading it, so I'll probably watch the anime first instead when it airs. It sounds fun enough for me, at least, so.

Love the manga so ima gonna watch the anime for sure.
Just hope their doesn't used the same VA as drama cd I need newbie VA nowadays..._-_

Shojou followed by vampire.
I can get the main picture of it.
Though i m not really a fan of it

I've only read the first volume of Servamp. It was okay. I wonder how the anime will adapt the series.

Figured that this manga would be adapted some time soon. Not too excited about it, but I guess I'll keep an eye on more info to come.

Premise sounds meh. Well see if when the PV shows up, it at least looks interesting.

Not sure about this... But I will still give it a try.

Huh, had never heard of it until now. Looks like it could be interesting. I'm glad it doesn't have the romance tag, and I tend to like this mix of genres.