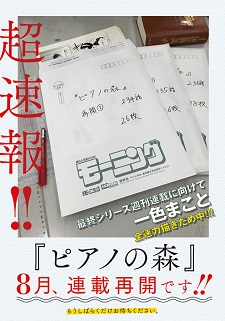 Editors of Kodansha's Morning magazine announced that Makoto Isshiki's manga Piano no Mori will resume serialization in August. The series had been on hiatus since the announcement of the results of the Chopin Competition in the story.

Piano no Mori had been serialized in the now-defunct Young Magazine Uppers between 1998 and 2002. It resumed serialization in Morning in 2005, and was previously announced to conclude in the 26th volume. The 25th volume was released in October 2014. It won the Grand Prize for best manga at the 12th Japan Media Arts Festival in 2008.

An anime movie adaptation premiered in 2007 and was nominated for the 2008 Japan Academy Prize for Animation of the Year.

please get scanlated so i can read it

OMO hope that they make a sequel to the movie afterwards.

I'm not surprised because it seemed like it was drawing to a close but I've been reading this series for years so I'll miss it.

I might have to catch up on this one, as I've been meaning to read it regardless. :o

kinda good to know I won't be waiting for years and years to get to the finale of this manga. it's good fun, so I look forward to the closure.

Anyways now that it's finishing I can start reading it. I kinda prefer finished manga lately so I'm looking forward to it.

Wow, the manga is so old!

I have been meaning to get into this series for a while. Guess I should start soon as it's almost ending.

A wonderful manga imo. I'm kinda sad that it's entering its final arc although kinda expected at some point. This series became one of my favorites that I picked it earlier in the year. It's a very character driven story with a lot of great storytelling realism, relationship building, and in general a series that I find memorable.

The music part is great too as part of its themes.

Really hoping it will get a full TV anime adaptation someday.