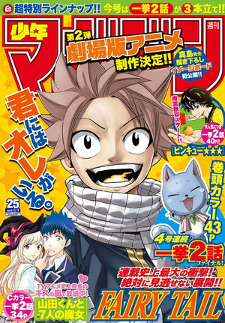 It was announced that the Fairy Tail franchise will be receiving a new movie and OVA adaptation.

The new OVA episode was announced during Fairy Tail's Ryuuousai event. It will be based on the manga's spinoff chapter, Yousei-tachi no Batsu Game (Fairy Penalty Game), which was published in Magazine Special in July 2013.

Amazon's catalog of Weekly Shounen magazine's upcoming issue, to be released May 20, has also revealed that Fairy Tail will get a new movie adaptation. Hiro Mashima, the manga's creator, will be participating in the movie's production. The magazine will also include two new chapters.

The manga previously received two TV anime adaptations and multiple OVA episodes. The first TV series ran for a total of 175 episodes between October 2009 and March 2013. After a year-long break, its sequel began in April 2014, and is currently still airing. The franchise has received one previous movie adaptation, Houou no Miko, which premiered in theaters on August 18, 2012.

Anyone else notice that yamada-kun picture.:)

What king of movie will be this ?

does the ova have a page in mal?

edit. Nvm just found a thread on this topic.

The first episode was fun~

Does anyone know how many episodes are there for the new Fairy Tail OVA?

My message is to all the admins
The ova of fairy tail 2016 has aired there first episode so why haven't you guys added it to MAL.
Please add it as quick as possible I hope the admins will take actions on it as fast as possible.

Hiro Mashima is trying too hard to surpass Oda Eiichiro.

Surpass? But Oda's writing is crap...Literally everything in Fairy Tail is better than anything in One Pice (including the fillers lol).

I don't like Fairy Tail that much but I'm looking forward to the movie.

vodall said:
It seems today is the day for anime announcements regarding breasts.
lol

I'll watch the movie for sure

Guess they haven't dubbed the second series yet..

yay, new movie and OVA. Though I think I have read the Ova. but great news. :D

ZA_WAYD said:
vodall said:
It seems today is the day for anime announcements regarding breasts.

preach it gurl :3
but seriously though, u have a point :/

Great, I don't usually do movies of series but I'll check this one out.

Finally!!!! But now we have to wait forever for this to come out :(

Not expecting anything about the movie, looking forward to seeing OVA though...
(A-1 doing the animation? any addition made between the GMG is bad enough for me -_-)

I don't understand people saying that they are milking ft, I mean really? Ft is still ongoing anime and manga ,so a movie or an ova is pretty common, how is it milking? >_>
Anyways great stuff, natsu looked awesome In that movie poster