Fushigi na Somera-chan began in Manga Pallete Lite's September 2008 issue and was serialized until the magazine was suspended in April 2011. While some other series were transferred to different magazines, Fushigi na Somera-chan is still marked as on-hiatus on Ichijinsha's official page. Serialized chapters were compiled into two volumes, which are currently only available for digital purchase.

Synopsis
The story follows the everyday life of Somera Nonomoto who can use the strongest kenpo, Nonomoto Mahou-ken, which is inherited from her mother with her younger sister Kukuru. (Source: Crunchyroll) 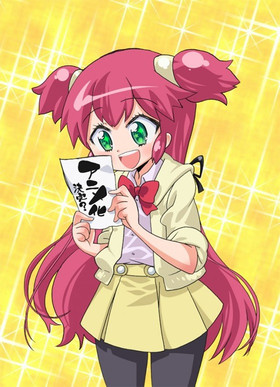 Not enough hook from that synopsis, so I'll say no until further information gets released.

Could be funny, could be incredibly stupid. I'll watch it.

If this were a short, I probably would watch it. But, unfortunately, at 20min per episode, I just don't want to risk forcing myself to finish it.

It looks like it is going to be a short anime. I will watch it.

creator of Ai Mai Mi - that is all I need, I hope it will be as insane.

Eh.. Somera-chan is somewhat cute, but that is all. Coming from the mangaka of "Ai Mai Mi," this is probably already ridiculous enough.

It seems a bit weird even for my tastes.

What's this, aNOTHER trick???

And WHY the hell isn't this on MAL https://www.mangaupdates.com/series.html?id=42718 ??

Well this one wasn't April Fools but the premise and stuff still looks silly. Not very excited about it and it's probably a short.