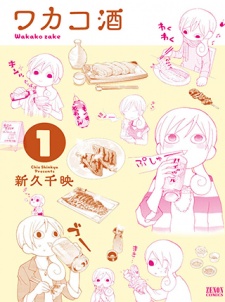 A scan of the upcoming issue of Monthly Comic Zenon magazine, to be released on March 25, revealed that manga Wakako-Zake will be adapted into a TV anime series. The manga also received a live-action TV drama adaptation last year.

Chie Shinkyu started Wakako-Zake in July 2011, and the seinen manga is still ongoing. It is serialized in Monthly Comic Zenon and published under Tokuma Shoten. The fourth volume of the manga ranked 41st in its first week on Oricon's weekly manga chart last December.

Synopsis
Murasaki Wakako, who is 26 years old, loves going out alone to enjoy eating and drinking, especially when something unpleasant happens at work. This manga follows Wakako through many solitary outings, where she enjoys different combinations of food and drink! (Source: MangaHelpers)

skip for me :O

I checked out the sole translated chapter and I have to say, it's compellingly uneventful :D

einonymous said:
More food exploration! And at 20min per episode, this one isn't really short, either... I'm a little unsure about trying it.
ya I think it would sound more appealing if each episode was less than 1/2 that but hoepfully its good. :)

More food exploration! And at 20min per episode, this one isn't really short, either... I'm a little unsure about trying it.

-Panda_Hero- said:
DragonNeptune said:
Wahh, so many food manga adaptations! I'll check this out as well.

once a trend is set there's always a bunch of anime around that theme... oh well, we'll see xD

Its a trend I'm really ok with! Well at least for now.. Lol.

I will give it a shot.

The series will last for 5 minutes, I guess.

From the cover, it looks like a bunch potential shorts.

Looks weird too. Will try.

This is Koufuku Graffiti without the cooking and more for someone in their 30's since it stars a typical working woman.

Will watch if its a short

Seems to be a lot of crappy adaptions these days. Not been many good animes this year and last.

TOO many generic Light Novel adaptions too.

The MC is an actual adult so I was very interested at first but the I noticed it will probably be a short series.