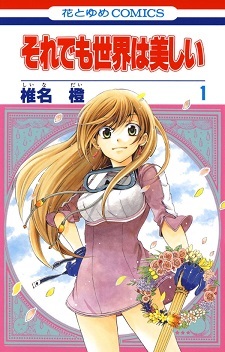 Hakusensha announced on Tuesday that Dai Shiina's Soredemo Sekai wa Utsukushii (The World is Still Beautiful) manga is receiving a TV anime adaptation. The TV series will air in Spring 2014. Further details for the anime will be revealed in the fourth issue of Hana to Yume on January 20.

Shiina has stated that she is excited to see how the heroine's song will be adapted in the anime.

Synopsis
Nike, the fourth princess of the Rain Dukedom and one who holds the power to call forth the rain, travels to the Sun Kingdom to marry Sun King Livius for her country, despite her own reluctance. She soon discovers that the King, who conquered the world in only three years after his ascendance to the throne, is still a child!! Furthermore, for trivial reasons, he has demanded that Nike call forth the rain...?! (Source: MU)

phoenixalia said:
Shuhan said:
Is this like most typical shoujos?

Kinda hoped for better, but not bad! As for the director I'm not entirely sure since I haven't exactly seen any of his stuff. Hoping for the best, though!

As far as I know, this is the first ever female-targeted straight shota anime.

Im going to cry……. THIS IS AN AMZING SHOUJO MANGA! and now its going to turn into an anime!!!!!!

Will watch it sounds interesting!

Studio Pierrot will be animating this.
http://www.animenewsnetwork.com/news/2014-01-16/naruto-pierrot-animates-soredemo-sekai-wa-utsukushii-show

Makuro said:
Not quite interesting, but I might watch this.

It looks fucking interesting, will watch this :3

Fantasy? In my shoujo? W00T

And Reimei no Arcana. :) For some reason I always pair these 2 manga up side by side. If you like Akagami no Shirayuki, it's highly possible that you like Reimei no Arcana too, and vice versa. XD

It's not very likely for Reimei no Arcana considering that it's completed in Japan. Akagami might have a chance though. Btw, if you like Akagami you would like Joou no Hana.

Amiluhur said:
It's best to not put too high of hopes for now. Who knows this one might end up having the same fate as sugar soldier that should be satified with just 3 episodes.

what the...I didn't think there were enough chapters to make a full season...

really like this one but the ao no hana ??? wish that they just animated last game instead!