Light Novel 'No Game No Life' to Get Anime Adaptation 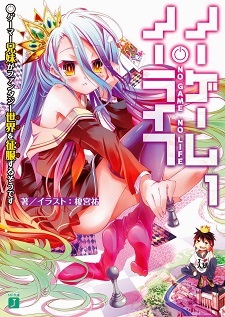 In the Media Factory fan event "Bunko J Natsu no Gakuensai 2013" held in Akihabara today, it was announced that five light novels will be adapted into anime. One of them is "No Game No Life." The light novel started in April 2012 and so far 4 volumes have been published.

No Game No Life on MAL

I have high expectations for this.. the light novel is great.
If the studio can adapt it nicely.. no doubt its going to be a huge hit.

Mixed feelings with the manga.

The characters are barely interesting, particularly the clumsy princess and imouto archtetypes whom somehow gives me strong hints as to where this series is going to heading into. And if it were not for his arrogance and brash attitude, i might like the male lead a bit more. While i find the interactions between the two siblings interesting, their over the top attachment with each other gives me bad feelings.

But on the other hand, i like the world building and the whole "game" element. Not gonna lie, i was fascinated at the way they properly introduce some fantasy elements, the game rules, and the crazy odds the characters are facing against. If the author pulls it right, it might be as fascinating and spectacular as Kaiji.

So it's such a love-hate situations for me. I hope the author develop more focus on the plot and world building

SkyFullOfStars said:
hmm...will try to read it. does sound like mondaiji and I really like izayoi from mondaiji... is the main character here a bit like izayoi?

I would say yes and no. They both are talented, skilled, and outwardly confident individuals. However, Izayoi was largely unchecked, unmatched so to speak. No one has the same "social power" as him, if you know what I mean.

However, the MC in No Game, No Life has an even relationship with his sister, who reminds me a bit of Shinobu from Bakemonogatari, minus the vampire element. He also has an interesting secret, which I won't reveal even though it happens fairly early in the story, which changes the way other characters see him.

So he has some of the same strengths but some additional weakness as well. From the limited amount of manga that I've read, the character dynamics are very interesting.

yhunata said:
Well, I was wondering about what to read next in my Tax lectures. Guess, I'm gonna go with this one.

P.S. Any news on it's release date?
dont think so yet im also waiting :)

Well, I was wondering about what to read next in my Tax lectures. Guess, I'm gonna go with this one.

P.S. Any news on it's release date?

I loved Mondaiji. So excited.

It looks and and sounds interesting, even a bit unique. Definitely going to be giving this a try.

FUCK YEAH, I ONLY SAW THIS NOW, FUUUCKKK YEAHHHHH!

Really interesting. This will end up on my PTW. ;D

can't wait for this ! ^^ im so happy right now they are animating so many LN's that im reading haha!

Hmm seems pretty interesting, I might try and read the LN first though.

Another adaption I am gonna be so looking forward to. Oh hell yeahhhh.

Visuals look great and has a good plot summary.

Gonna be checking this out once it releases :D

Stark700 said:
Website is up:
http://ngnl.jp/
Visual still looks good. I can't wait to know which studio picked this up~