by symbv
May 17, 2013 8:03 PM | 217 Comments
The game "BlazBlue: Calamity Trigger" will get an anime adaptation, according to the obi strip bundled with the latest volume of the light novel "BlazBlue: Calamity Trigger vol.2 of 2" that is based on the game. No other information is available for the moment. The game was first released as an arcade game in November 2008 and it was later released on PlayStation3 and Xbox 360 platform.

saying Calamity Trigger is wrong, all of the sequels will be in the anime,the PV shows Bullet and Azrael who are from the latest sequel,besides,like hell if the calamity trigger story needs 25 episodes to cover it,more like 10 at most

well this is surprising, i wish they will follow the novel properly and not screw up the whole series , and yes blazblue is a fighting game but at least it has a nice story and worth the time playing. i wish they could have just continued releasing the game on pc

I just really wish they made Guilty Gear into and anime. :/

Well I'll be watching because it's blazblue and for Kisaragi (fave char. Gotta love the crazies~). The voice acting in the game kind of annoyed me though.

Also the singer sounded familiar was she the same person who sung Hakkenden 2 OP?
Yes she is, her name is Faylan and the title of the song is "Blue Blaze".

If Kokonoe gets a lot of screen time. I will personally buy a hard copy even though I don't know japanese >_>

The animation of this game is amazing, visually it will be awesome 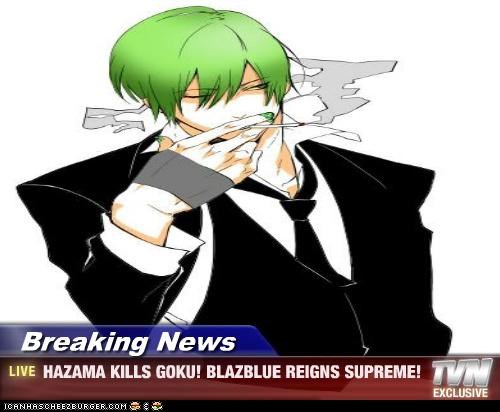 No thank you BlazBlue Calamity Trigger is garbage.

Same singer who did 2nd OP song for Mirai Nikki. Here's an example of her works:
http://www.youtube.com/watch?v=y_Dxv4bQEZU

Khodan said:
The story is already a mess... can't expect something that great from an anime adaptation of the game.
Yes, but that's with nearly ever anime adaptation of games they never turn out good.
It's anime for the fan that will like anything BlazBlue.

BB story 3/10 cliche.
Character 6/10 different not relate able though some are too average.

The story is already a mess... can't expect something that great from an anime adaptation of the game. Also, they kept the same voice actors from the game... Noel voice's gonna annoy me as hell like she always do in CT and CS. The only thing i'm waiting for is Chronophantasma to see the update of the combos of the characters and also the fighting style of the newcomers.

Yay I can't wait. Damn it why can I not love blazblue it's just too great.

720p BBCP and Blazblue: Alter Memory PV is up:

Have not played the game before,but it looks cool. Needs more pictures and information to see if I should watch it.

I wonder if Tsubaki wil be in here.

been waiting for a blazblue anime for a while now, I hope it won't disappoint :D