by symbv
Apr 6, 2013 7:31 PM | 97 Comments
According to a short article in this month's issue of NewType magazine, Aquaplus' visual novel "White Album 2" will get an anime adaptation. It will be made by Satelight and the story will follow the PS3 edition. Mizushima Takahiro, Yonezawa Madoka, and Nabatame Hitomi, the three main cast of seiyuu from the PS3 game, will stay on in this anime. The schedule has not been announced yet.

Anime used for the OP of the game:


The first game of the White Album series was animated by Seven Arcs in two seasons in 2009.

Imation10 said:
does anyone know who is the scriptwriter of this anime adaptation?

The same one who wrote the VN script

does anyone know who is the scriptwriter of this anime adaptation?

visual novel was popular, hope they adapt it satisfyingly @w@

OMG. I remember the first one. Definitely giving this a whirl.

Aerbage said:
No doubt it is going to be an amazing adaptation but sadly this is only the introductory chapter and I like the other chapters more. Also a completely different character design from the visual novel (at least the PC version), not sure if I like it more or not.

Designs 95% similar to PS3 version IMHO. Speaking honestly I don't like both designs much but at least this once looks less edgy than PC once.

Anyone want to reup that C84 PV to Youtube?
http://v.youku.com/v_show/id_XNTk0MTUzMzA4.html

Yup something I'm gonna watch... Can't wait for it.

Female leads don't look nearly as eye-catching as Yuki and Rina did. Not a good start for me. 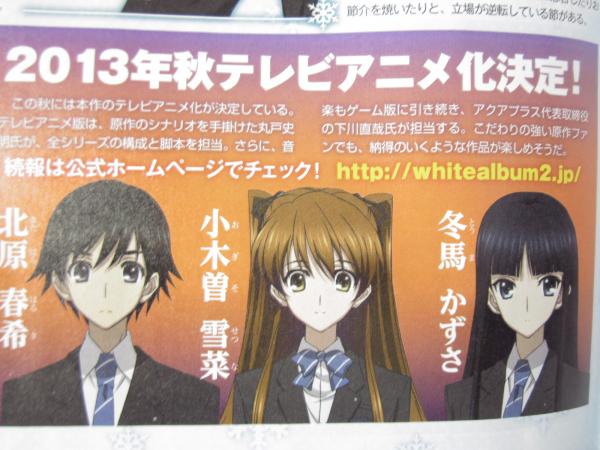 Just finished watching the two seasons of the first White Album. I really liked it, so if this is better then I can't wait!

bahoaday said:
BassExtractor said:
I don't know if these guys can be trusted. Anyone who doesn't put Aiyoku no Eustia in top 10 are like... ;_; They got no clue

Aiyoku no Eustia is great, very great but it isn't really a classic. AnU is definitely in the top 3 Visual Novels of 2011 but not of all time.

Well ye I guess, even though it's not anticipated as a classic, the storyline obviously brings something really good to the table. I find it really unique as in setting and storyline.

BassExtractor said:
I don't know if these guys can be trusted. Anyone who doesn't put Aiyoku no Eustia in top 10 are like... ;_; They got no clue

Aiyoku no Eustia is great, very great but it isn't really a classic. AnU is definitely in the top 3 Visual Novels of 2011 but not of all time.

Ah, and in case you wonder where Clannad, Symphonic Rain, Stein;Gate or Ever17 are. They are not eroge, thus not listed here. They have 90, 89, 90,90 medians in that order.

I don't know if these guys can be trusted. Anyone who doesn't put Aiyoku no Eustia in top 10 are like... ;_; They got no clue

I'm just a little skeptical, knowing anime's track record of outstanding VN adaptations and all, but at least there's nothing messy like branching story-lines involved. Might be worth watching.

But I can't understand all the bashing aganist the first white albume anime. I for myself foud it to be an outstanding and mature anime. Great plot, even greater music and enthralling atmosphere. One of my favourite romance animes. Even if some may didn't like the mc, that doesn't make the anime itself bad. And for the ending..memorable IMO:

Open endings are disputed, but as fas as it goes for romance in Harem from an original story or an animation of an VN it does fit quite well sometimes. Specially in this case. It was left open which girl waited for the MC at the end. And till today I sometimes do wonder who it was, as it wasn't obvious as in many other romance animes. Thats why I love the first white albume anime, definitely 9/10 from me.

I want to forget the first "white album" but I can't why cause it has got to be the worst anime ending I have ever seen.... and the mc don't get me started on the sob. I was sooo pissed when I watched it years ago. I will watch this but the second i see it going the same route as the first i'm out.