by dtshyk
Feb 7, 2013 4:47 AM | 80 Comments
According to NewType magazine March issue, director Imaishi Hiroyuki has announced his new anime project. The production studio is Trigger, a new studio established by Imaishi after he quit Gainax. Imaishi said he has been working on the project since 2010 along with Panty & Stocking with Garterbelt. Details of the project will be revealed in the June issue of the magazine to be released on March 10th.

More information can be found here.

Source: Scan of NewType (with a rough concept illustration) 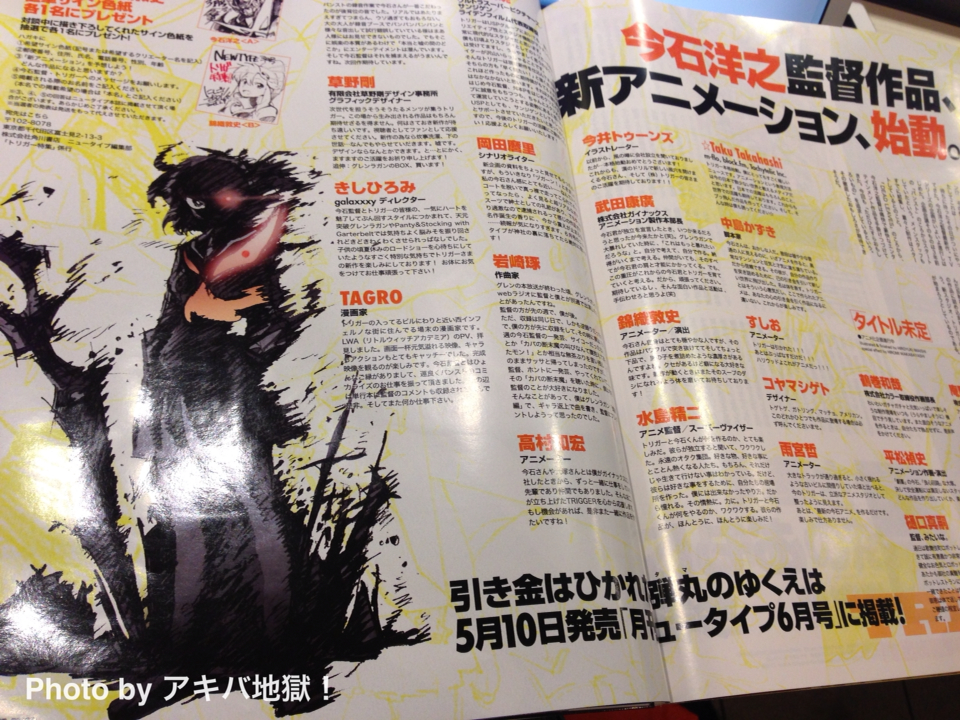 You guys are hyped? This anime delivers.

It was AMAZING.
I really didn't expect that, I thought I would simply like the show and sigh at Western fans getting too excited but damn, I already love this show. The problem is, I have serious doubts about how long will its energy last. If they can manage whole cour or however long is it supposed to be, Kill la Kill will be a masterpiece.

^ For your question 1 the best information that came out (by people calling the TV stations to find out) is that it will be an 1-cour show.

I am too Hyped for this ( Gurren Lagann Season 2) anime :D
Simon's Daughter VS Rossiu's Daughter
any ideas about :

2- Any one afraid from budget problems / bad animation / Gainax Ending ? I am afraid of that, it could ruin the show.. I hope Imaishi (the infamous troll) had taken that to consideration

Adding this here since it wasn't in the OP.

First episode reactions from those who went to the pre-air event:

>My soul and body trembled; this is going to become a legendary anime.
>It was just 24 minutes long, but I was completely overwhelmed. I don't have one single complaint! Oh, and Ryuuko was much cuter than I expected.
>Nothing about it was half-assed; animation and heat were full-force from beginning to end. Everything was fucking cool.
>Everyone NEEDS to watch this when it comes out in TV next week.
>It's old-school but at the same time refreshing; non-stop sexy violence from beginning to tend. This show will raise the far for hot-blood in anime.
>I'm glad it was 2D, if it had been 3D I would have died from excitement.
>It was like a non-stop rollercoaster; an incredible amount of content for one episode. Extremely interesting.
>So fucking good! I wanna cosplay Ryuuko. (btw, I'm a dude)
>It was like getting your body and whole body shaken repeatedly; super exciting! I can't wait to watch it again.
>First episode?! It was like watching a movie!
And many variations on the same overwhelmingly positive feeling.

Shuhan said:
This looks too cartoony. Wtf is up with those character designs.
I'm guessing you haven't seen Gurren Lagann?

Shuhan said:
This looks too cartoony. Wtf is up with those character designs.

As mentioned this series is supposed to be somewhat of a throwback to the 80's/90's anime, something like a TTGL with chicks instead of robots.

I love the character designs. I'm not big on some of the dialogue, though. And that "tough guy" student council member has an annoying voice. I hope he dies, lol.

This looks too cartoony. Wtf is up with those character designs.

The PV strongly gives me TTGL vibes (and gawd, that transformations), though for some reason i just dislike the characters' faces. They look like coming out from 80s anime era

Oh my god their voices fit them perfectly, that insert song is most definitely by Mika Kobayashi who is almost always featured in Sawano's OSTs. My hype level to the max right now!

Tbh I don't really care I was just giving you a hard time because I'm bored hahaha. It would be nice to have bbcode back for images though.

Looks like the people on the left are team Ryuuko and the right is obviously team Satsuki.

A translated interview with Ryuuko (Koshimizu) and Satsuki's (Yuzuki) seiyuus from this page http://i.imgur.com/a8ijIzs.jpg


Newtype said:
Q: So the afureko is well on its way, but what are your thoughts on the show after voicing your part?

Koshimizu: It's a really hot-blooded Showa-era anime. During my childhood, there were a lot of anime shows where hot-blooded main characters would duke it out and speak to each other through their fists. And now I'm participating as a seiyuu in that kind of anime! I really love it (laughs)!

Yuzuki: There are a lot of shows these days with thin lines and a "light" kind of feel to them, but KLK is "thick". There's some broadness here.

Koshimizu: And Mako's family has a Showa-ish atmosphere to them, too. The whole family is bouncing all over the place (laughs). They're the healing factor, the foil of this show. On the other hand, the entire cast is gorgeous. I can't get enough of them.

Yuzuki: KLK is an original story, so of course we don't know how things will develop in the plot. And we're very excited every time. When you think of the Imaishi-Nakajima combo, you definitely get a "TTGL" impression - but even on top of that, this whole project feels fresh. When we saw the first episode for rehearsal purposes, I was blown away.

Koshimizu: I got goosebumps too, when I saw the episode at home for the first time. I couldn't stop trembling. I thought to myself, "you got yourself involved in something too amazing"!

Yuzuki: Naturally it was footage for rehearsing with, so it didn't have any sounds, but even then I was like "awesome!" And I was talking with the other cast members about this, but we can hardly imagine what the final product would be like.

Koshimizu: Also, when I was reading the script I couldn't understand some parts very well. But when we saw the episode, I understood everything. It's not just the scenarios: everything combines well to MAKE this project. That's the feeling I got from KLK.

Yuzuki: And they're things you can't do without animation. Characters that you can't really express, the action, the story - they have to be anime. This show's packed with those kinds of things. That's why I think it's insanely awesome (laughs).
Dat hype.

That's more like it was in neontaster's post than your post then... I thought you meant pic link you put in your post... Besides, neontaster put the link without mentioning it is the senketsu. You mentioned senketsu without linking it to that pic. And this is why I posted the pic and made the connection. Or perhaps you meant your whole post to refer to the link in neontaster's post - if that's the case, then my bad for not getting it.