by dtshyk
Aug 27, 2012 9:41 PM | 29 Comments
According to the official website, Enokizu's four-panel manga "Kotoura-san" was announced to have a TV anime. 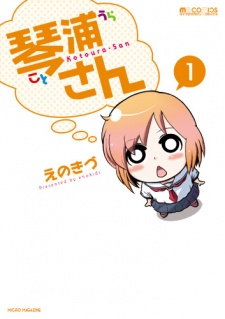 Synopsis:
A school love comedy. Kotoura Haruka is a 15-year-old girl who can read people's minds. She has been suffering from troubles caused by her mind-reading ability, and her parents got divorced as a result. She moves to a new high school but tries to keep away from her classmates. Manabe Yoshihisa, one of her classmates, accepts and appreciates her ability and she begins to interact with her friends with his help.

Wonderful show! Emotional roller coaster ride, great characters you care about even though you just met them. Already ordered the manga and BD...

Im so glad that they airing it. I love the series so far and Crunchyroll is already airing episode 2

ihateeveryone said:
hgeronimo said:
where did you read that it's a 5 min anime? :/
It's not.
Not entirely correct. There are a bunch of short flash anime distributed on net before the actual anime aired. You can still find them on the official Kotoura-san anime website:

I actually really liked it! I suggest you give it a try, the beginning bit was very sad, but it got a lot more interesting!

hgeronimo said:
where did you read that it's a 5 min anime? :/

holypoop said:
Director of Mitsudomoe? Might check out. Too bad it's only 5 minutes..

Yea, gonna keep my eyes on this one too.

Director of Mitsudomoe? Might check out. Too bad it's only 5 minutes..

looks interesting, gonna give that a try

And the names involved certainly do not excite me.

King_Zero said:
HauntingShock said:
Looks interesting, but if it's a 5min anime...

The mind reading bit reminded me of Kuttsuboshi but heterosexual version.

HauntingShock said:
Looks interesting, but if it's a 5min anime...

King_Zero said:
HauntingShock said:
Looks interesting, but if it's a 5min anime...
This. But I loved Mitsudomoe so maybe I'll check it.