by tobruk
Aug 26, 2008 1:59 PM | 45 Comments
Marvel Comics has formally announced a partnership with Tokyo based anime production studio Madhouse to develop four 12 episode anime television series featuring Marvel super hero characters. The first series, which will feature Iron Man and Wolverine, among other characters, will premier on the Animax network in early 2010.

Marvel International president Simon Philips has explained that Marvel intends for these super heroes to be redesigned to become “part of the fabric of [Japanese] society.” While Madhouse president Jungo Maruta agrees, “Marvel today is so open-minded. Marvel gives creators freedom to fly.” Madhouse chief operating officer Alex Yeh says of Marvel, “Although they say, ‘I want Japanese anime,’ it’s not what they actually want. They want a hybrid between Japanese and Western animation.”

The Marvel/Madhouse productions will also be developed into Japanese manga while the anime will be distributed via multiple outlets including cellphones.

Cool; I'm interested to see some footage, definitely. Anything Madhouse does is either fantastic or sub-par, so I may give this a shot in hope of it falling the former category.

I'm also not that big a comic book fan so I'm probably not nearly as offended by the idea as some might be... ;-)

News Update
Marvel announced that their collaboration anime with MAD HOUSE Studio will be aired on Animax channel from the Spring of 2010 in Japan. The trailers of the "Iron Man" and "Wolverine" will be shown at San Diego ComiCon on July 24th.

Yandere said:
I wonder if it has something to do with Michael Turner dying. =(

But awesome, I hope it goes well. =o I love Marvel. <3
tobruk said:
Yandere said:
I wonder if it has something to do with Michael Turner dying. =(

Turner worked for Top Cow and Image, not Marvel
well he worked for ebrione including marvel ant the only website that i saw giving the news of him dieng was marvel i dint see it on his

Yandere said:
I wonder if it has something to do with Michael Turner dying. =(

Turner worked for Top Cow and Image, not Marvel

I wonder if it has something to do with Michael Turner dying. =(

Why so much negativity?

Madhouse, which is great, is going to release multiply Marvel anime's.
Iron Man and Wolverine, are two great Marvel heroes, the reason why these are chosen is also understandable, The Hulk,Iron Man 2, Iron Man vs Hulk and the Wolverine Movie in the nearby (2009-2010) future.

My guesses for the others are The Hulk (cuz of Iron Man vs Hulk), Thor (cuz of the Thor movie), Giant-Man (aka Ant-Man) and the Wasp cuz of they're movies, and of course, Captain America (The Hulk, Captain America).

And of course the probably epic movie, The Avengers, with everyone I just said, exception for Wolverine tho' (probably). Since all the others are the founders and so headmembers of The Avengers.

I will defintly watch/buy them, since I'm a great fan of Marvel animation/comics AND movies, and I loved the Batman anime, although that's DC comics.

I think this will be a good move from Marvel and Madhouse, since Marvel doesn't get to much attention in the east, only the Live-Action movies score good there, but the cartoons and comics don't, so Marvel will prolly rise up in the east with the futured movies, animated movies and the anime's itself, all in just a short amount of time (2-3 years).

Uummmm animate?
As in japanses designs?

I am so totally looking forward to this :D *Big Marvel Fan*

it sounds interesting... then again maybe not

I like Marvel...I really hope this doesn't go horribly wrong. Wolverine is one of my favourite Marvel characters as well.

that quote isnt from me but oh well, and with all the comic companies worried about being able to survive since the comic industry has been declining every year, why wouldnt they look at other formats to make some money.

Anime based on good comic books do not have a very good track record. Manga spider-man has a freaking mecha. I'll try to watch, but I don't have high hopes for this. 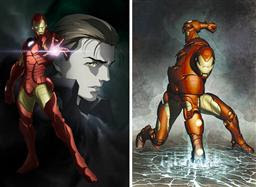 "X-MEN" and "Incredible Hulk" will follow the Iron Man series.

Madhouse are the best anime production studio out IMO
Monster
Death Note
Claymore
Lagoon
Trigun
Gungrave
so on & so on i do think this will be hit or miss based on how much rope does Marvel give Madhouse and how many risks will they take in making these western-anime hybrids,hopefully there arent too many cooks in those kitchens

I've always been a fan of X-men

i'm eager to see this one