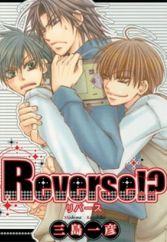 Amemiya is a teacher who is now teaching at an all-boys school. Frustrated with his currently situation on career and love, he decides to mess up with what seemed to be a gay couple, just so he can "relieve the stress". The sweet Mifune and the whiny Kishima aren't what they seem to be, though, and it doesn't take long for Anemiya to discover that. Now, because of fooling around, he got himself in serious trouble... 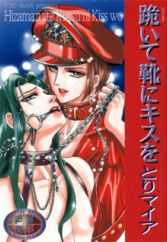 Hoshi no Yakata centers around the employees of a suburban s/m club. The characters are beautiful, the storylines are angsty, and the artwork is horribly explict. What more could you ask for? Most of the story takes place inside or on the grounds of Hoshi no Yakata, a humongous European-style mansion. The story's other locale is Airenrou, another club located a few hours' drive from Hoshi no Yakata. Name of the 5 volumes : 1) Kneel Down and Kiss my Boots (Hizamazuite Kutsu ni Kiss wo) 2) A Beast in the Cage (Kedamono wa Ori no Naka) 3) The Poacher of Desire (Yokubou no Mitsuryousha) 4) The Prisoner's Destination (Torawarebito no Ikisaki) 5) A Slave's Condition (Dorei tachi no Jouken) 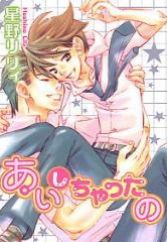 Various short stories with a tinge of shota. 1) Two young lodgers are at daggers drawn but really love each other. One day one ate the other's pudding without asking permission. 2) A Condition for Love - A heterosexual student is gradually falling in love with a gay one who told him of his feelings. (Appears as Ch. 3 of English ed. of Chocolate Surprise.)[B-U] 3) Mix Chocolate - game involving two guys, lots of girls, and lots of chocolates. And hidden amongst those chocolates is a single Garana chocolate. If any of the girls land the Garana, they get to have sex with the hottest guy in the class, Kakiuchi! If one of the guys get it, they get to pick anyone they want to have sex with. But what happens when one guy, Ogasawara, gets the lucky Garana and asks the other guy to have sex with him?! (Source: Aurora Publishing) Prequel to Mix Mix Chocolate Ch. 1 (English edition Ch. 2)*. 4) Teach Me Love - A very popular student uses his classmate to evade his girlfriends. But one girl gets angry and hits the classmate, and the hero takes him to the school infirmary. (Ch. 4 from Mix Mix Chocolate*). 5) Second Approach - At a school festival, a date with the hero is the prize for a charity auction. The hero is very embarrassed because his friend, whom he had previously turned down, buys him. (Ch. 5 from Mix Mix Chocolate*). [B-U:edited] 6) A spoiled rich son orders his older servant to show his penis. But when he tries teasing it, his servant flies into a rage and rapes him savagely. 7) A student puts a bandage over the eyes of a fellow pianist student, but this student recognizes his voice, which he loves, when he hears him singing. * Note: Please see More Info tab (above) for further information. (from B-U) 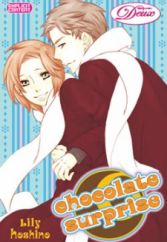 Synopsis refers to the English (Deux Press) edition. See More Info tab for further explanation. 1) "Mix Chocolate". Originally appeared as Ch. 3 of the manga Aishichattano. Prequel to Ch. 2 below, which appeared in the Japanese manga Mix Mix Chocolate. 2) "Mix Mix Chocolate" - a game involving two guys, lots of girls, and lots of chocolates. And hidden amongst those chocolates is a single Garana chocolate. If any of the girls land the Garana, they get to have sex with the hottest guy in the class, Kakiuchi! If one of the guys get it, they get to pick anyone they want to have sex with. But what happens when one guy, Ogasawara, gets the lucky Garana and asks the other guy to have sex with him?! (Source: Aurora Publishing) 3) A Condition for Love - A heterosexual student is gradually falling in love with a gay one who told him of his feelings. (Originally Ch. 2 from Aishichattano.) [B-U] 4) Teach Me Love - A very popular student uses his classmate to evade his girlfriends. But one girl gets angry and hits the classmate, then the hero takes him to the school infirmary. (Ch. 4 from Aishichattano.) [B-U] 5) Second Approach - At a school festival, a date with the hero is the prize for a charity auction. The hero is very embarrassed because his friend, who was dumped by him before, buys him. (Ch. 5 from Aishichattano). [B-U:edited] 6) Spend the Night with Me - Childhood friend Akiyoshi shows up every weekend at Koichi's house uninvited to hang out and spend the night. Doesn't he have any other friends? 7) The Power of a Kiss - a boy fairy, who lives in the potted plant on Shiro's windowsill, becomes able to take human form permanently (except with ears and wings) when Shiro, half-asleep, kisses him on the night of the full moon. 8) Who Owns a Gentle Heart? - the formerly-married father of a young girl and her college-age tutor fall in love and sneak out to get together when she has a lesson, unbeknownst to her. 9) Human Comfort - (Hito Hade) - Student secretly works in a brothel to assuage his loneliness, where a fellow student tracks him down. (Appeared as Ch. 6 of Japanese ed. of Mix Mix Chocolate.) [Ch. 6-9: MAL Staff] 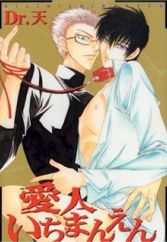 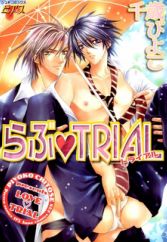 Contents: 1. AV Boys College student Kouta needs to make money fast! His family borrowed alot of money and ran off, leaving him with the debt. When his senpai Sonomura gets him a job as a gay AV actor, Kouta decides to only work until his debts are paid. But the money is really good, and working with Sonomura is getting more and more comfortable... 2. My Love Castle Masaomi's father has gone on vacation with his lover and left Masaomi to manage his love hotel, something he has no experience at. With handsome manager Tsushima helping out with his "hands on" approach, things will be fine. Right? 3. I Love You More Than I Can Imagine!! Keizou's family owns a liquor store and one day during a delivery he picks up a beautiful young student. Keizou's never been interested in guys before, but something about the high school boy sparks his imagination and now he can't get him out of his head! Will Keizou get a chance to make his dreams a reality? 4. The One Who Loves You Deeply Sex shop owner Miyatsuki knows there's something familiar about the beautiful young man who comes looking for a job. But the harder he tries to place Jyunta, the more it slips away from him, and each day is one closer to Jyunta taking on customers, an idea which bothers Miyatsuki alot. 5. Me and My Beloved Sensei Nagaoka has his dream job, being an assistant to his favorite mangaka, Chigaya Senri. But Chigaya seems to be a bit of a recluse and unusual - incorporating running and weight lifting into the daily lessons. But who is really doing the teaching? And why does a mangaka own a black bondage suit? 6. The Courage I Get From Loving You? Isawa thought visiting the hot spring would be boring, but beautiful (underage) part-time worker Shitsuki catches his eye, and Isawa finds himself unable to resist the lure of the innocent student. 7. Love Trial Kousuke has spent three years in an unrequited love for his friend Sonokawa Yukihi. Without the courage to confess, Kousuke is afraid that they'll graduate without Yukihi ever knowing his feelings. But a class trip stay with aggressive upperclassmen, revealing clothing, and huddling in small spaces may make it impossible for Kousuke to keep his cool! 8. Love Trial - After That A beautiful sunny day brings out the beast in Kousuke. (Source: MangaUpdates) 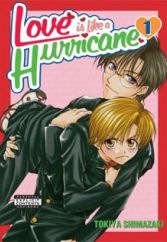 Mizuki gets molested on a train bound for school, and the perpetrator is none other than the school president, Azuma! Mizuki gets called to the student council room, where Azuma confesses his love for him. So begins the tale of this wacky, school story. (Source: 801 Media) 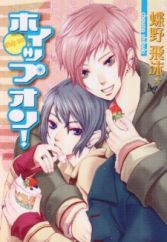 BL is such a ... rich and uh... varied genre. Don't believe it? Check out this extremely porny compliation celebrating the various shapes and sizes of men in BL... from delicate waifish youths to middle-aged musclemen, you'll find it in here. And boy is it porny!! (Source: DokiDoki) 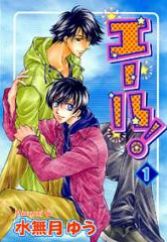 Touguuji Shin finally manages to enter highschool. He has always been unhappy for being treated like a girl. He decides to join a club which he belives to be manly, hoping that he can root away that hateful custom around him by changing himself. (from B-U) 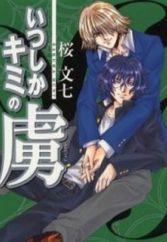 Walking through the park, student Aoi sees Kouki, his friend from middle school. Aoi hasn't seen him in three years, since Kouki did something terrible, then ran away. But Kouki's not through with Aoi yet... (Source: MU) 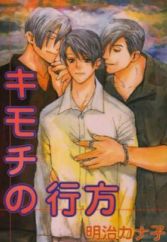 All of Keiji's body piercings are the symbol of a secret contract, which stipulates that all his needs would be completely taken care of by two twin brothers, Sou and You, in exchange for his becoming their pet. However, the appearance of Miyama — Keiji's first actual friend — starts changing things. For the first time, Keiji finds it difficult to keep this dark secret buried, and the thin balance he tries to maintain unknowingly starts crumbling bit by bit... Feelings like growing fond of someone, trust, friendship, love... each swaying feeling is depicted in this famous series, now in completed version! (source: MU)

Chronicle of the Divine Sword 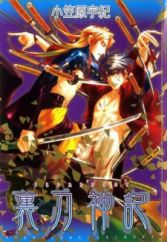 The first story is like 'Highlander Immortals Gone Yaoi' but not exactly, because there can be more than one and cutting off the head will NOT stop them! Will anything?! There sure is lots of penetration going on, and these boys aren't shy about doing it with swords either. (That double-meaning is not a joke.) The second story is about ninja-boy training. Those boys train hard. Long and hard. The third, fourth and fifth chapter is a story called Birds of Wing Abreast. It starts when a woman takes a small child and leaves her... husband? Taiki is now a heart-broken cute young med student. A man notices him, which was predictable! The man is a tattoo artist who seems to have psychic visions, which was unpredictable? Can you predict what happens? Fine, but can you predict EVERYTHING that happens? ( Source: 'Manga Traders) 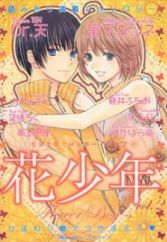 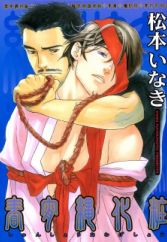 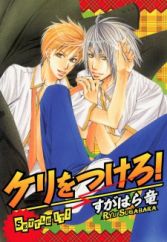 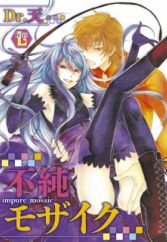