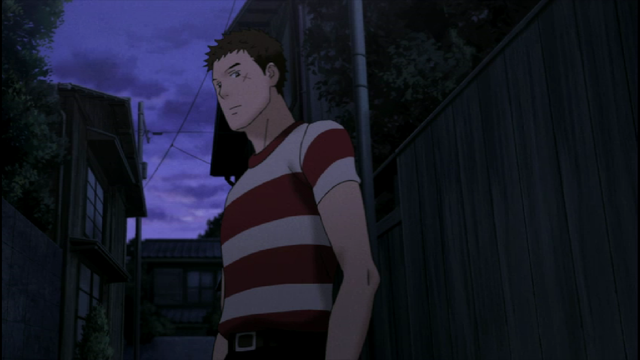 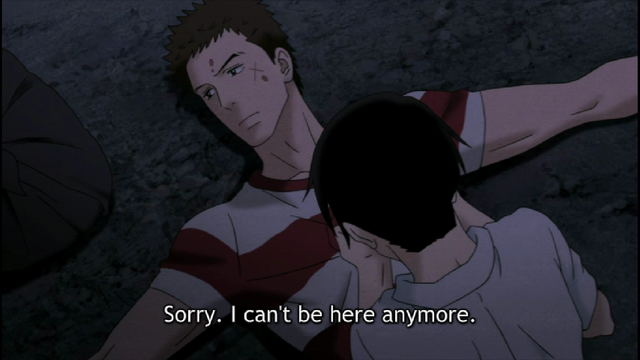 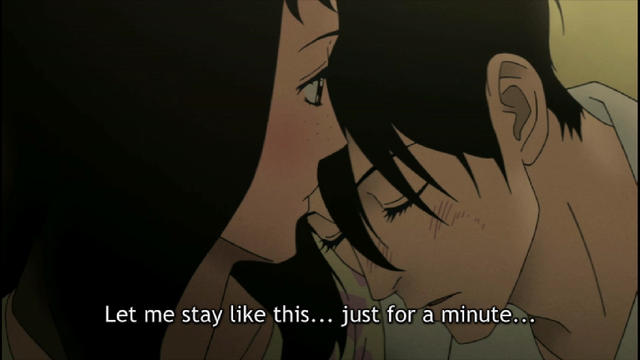 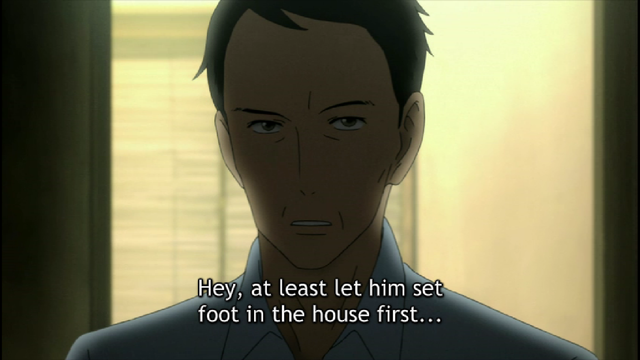 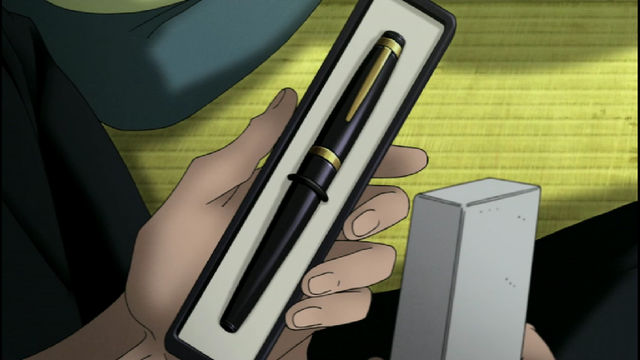 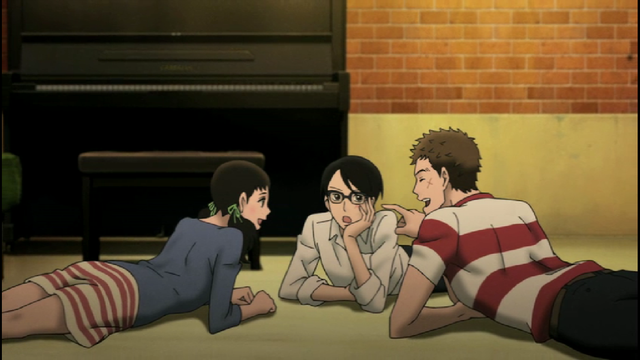 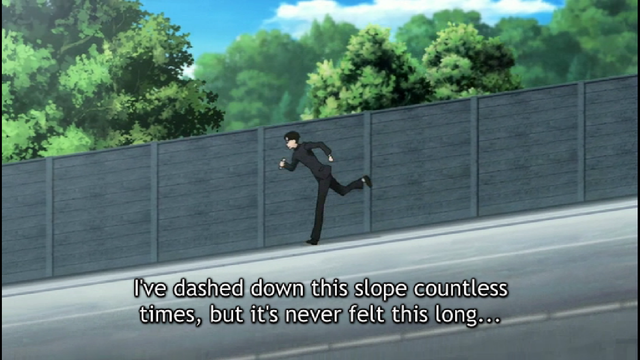 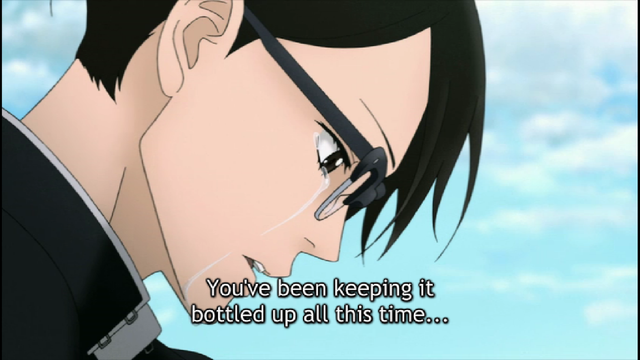 Offline
Mar 2012
254
That was such an excellent, emotional episode!

The music, yet again, accompanied the scenes beautifully, particularly the scene between Sen and Richie on the rooftop.

As long as the last episode is as good as the ones that preceded it, this will definitely settle among my favorites of all time. As it stands now, this series is an easy 10/10!

Only one episode left. I'll miss this show. I wished it was longer, the anime skipped a lot of thing in the manga.
#7
Sam1198777

Offline
Dec 2010
157
GOD. THIS EPISODE. the music is just so good. goes so well with the scenes. AND SEN COME BACK NEXT WEEK. i hope this doesn't have a sad ending.
#8
stand
Offline
Aug 2011
7280
Holy FFFFFFFFFFFFFF
I knew this was coming because I read it in the manga but still gah.
I was almost going to hack up my heart cause it was stuck in my throat all through the episode.

On the flipside...Riko singing was super cute.
#9
tilitappaaja
Offline
Jan 2012
80
Insta-goosebumps by the music played during the rooftop scene.
#10
Kundalini

Offline
May 2009
421
AH! JUST when I was thinking HELL YEAH!! (Kaoru giving Sen a reality check and blocking his escape) and AWWW, HOW CUTE!!! (Ri'ko singing "My Favourite Things") BAM!! all of that nonsense happens!
Like things JUST have to go wrong! :( My heart was blank at the night scene and then beating when Ri'ko was crying... And then a little relief but sad that it was Sachiko... bbbut... then Sen WHY YOU DISAPPEAR??!!!

On another note, Kaoru can be a mom... :) I loved that tender moment when both of them were crying. It was good to see macho guys cry for a change. You get to see that it hurts them so much too. And it was a smart comeback of the question of the "special case of the rosary". It was a binding element for all the episodes we've seen.

Quite the ending theme that gives out hints.. Now we know what that "undelivered note" meant. But I hope Sen returns. :( Please. YOU HAVE TO!!!!

Despite the fact that the episode appeared rushed, it still showed us quite a bit, pausing a few moments. The pacing was fine I guess.
Hmm.. I wonder.. Would Sen have gone to Kaoru's mom? Or Jun (less likely with Yurika's case)? That is, if he crossed cities... That is, too, if he went to someONE. Otherwise.. where will you go wandering? :(

Offline
Aug 2007
1244
Eh, what just happened. ARGH. I think I shouldn't be sewing while watching this episode, it all went so quick I_I
#12
zzzeally


can't wait for the last epi

Offline
May 2012
350
I was so happy that Kaoru was there to tackle Sen. So so very happy. I was worried about what was going to happen. I loved the expression on Sentaro's face when he knocked off Kaoru's glasses too. It was obvious it actually hurt him to do something like that, obvious that he had some major regrets for leaving, just at seeing Kaoru's glasses on the ground. Sometimes the smallest things are powerful.

Also the stepfather was sweet. I don't know the history behind him and Sentaro, but he was honestly trying to get something for him, and it was adorable.

I love that they asked Riko to be part of their music for the festival, Riko singing was adorable, and that song actually brought tears to my eyes. I've said it before and I'll say it again, the musical direction in this anime is one of the best I've ever seen.

Also oh crap, Sentaro... I really freaked out until I heard that it was Sachiko, then I felt like an asshole for caring so much more about him. The rooftop scene is so moving, and the heavy guitar mixed with chorus is simply moving. I feel like I could write an entire essay on this scene, from the beautiful start to the moving and emotional finish.

And then... even more emotions. Everyone's reaction to Sentaro being gone is just... heartbreaking. I don't know how they can top that, honestly. A little scared to find out where Sen ended up, to be honest... especially since he went without his rosary.
#14
Dalek-baka

Offline
Oct 2011
2381
Kaoru is once again in his emo-mode
ok this time he actually had quite good reason to do so
somehow I am dissapoint by lack of progress in romance with Riko - still they had some nice moments here and there (I hope she was talking about Kaoru's footsteps :P)

Sen reacted... heck I was kind of expecting him to run away one way or another
and fact that his sister has awaken that was good :) if she didn't that would suck hardly

Offline
Feb 2012
5476
Are you fucking kidding me, first convincing Sen to stay and yet letting him run off in the end, don't you dare give us a bad ending for Sen, nobody wants that and damn you for making me have tears in my eyes during that rooftop scene, Sakamichi is just so good that it gets painful sometimes.
#18
c_ivan13
Offline
Jun 2012
148
the way she sand my favorite things was pretty catchy.and wow i did not expect this. its sooo sad.
#19
Cooperation-san

Offline
Jul 2009
2640
What happened to the whole family drama in the beginning, wtf. They built that up and just let it fizzled out.

I thought he wanted to leave cause or else, he would've given his old man a woopin'...

Offline
May 2012
113
Nichibotsu-kaeru said:
this was to sad, i nearly cryed for the first time in a long time

I feel you there, Still hoping for a happy ending though. Come back sen!

Offline
Jan 2012
2608
Gift or no gift, that father doesn't look like he's glad to see Sentaro. Sad about that accident too. I was happy at the beginning when Sentaro was stopped and didn't leave, but in the end he still did. Eh, looking forward to next episode. Riko's singing was catchy. I liked.

Offline
Nov 2011
785
It was an okay episode. Without the history behind Sentaro and his father, there's nothing particularly emotional about this episode for me. As is, Sentaro is just another teenager running away from his problems. I am quite sad that the festival didn't happen, however.
#33
Valentiln

1stly, that made me lol and 2ndly, you better have a tumblr cuz imma follow you XD

Even though Ritsuko has been with Sen since forever, nobody gets him like Kaoru does. I love their friendship. They understand each other even without giggling like girls. And obviously, as a shipper of KarouXSen, this episode was orgasmic.
Now, why did Sen run away? His sister seems fine, dad seems alright then what? The rooftop scene kinda killed me. I can't imagine how much he must have loathed himself for being the reason to his sister's condition. Glad to see her alright or Sen would really die which I definitely don't want to see.


Elite60 said:
Can't believe there's one episode left...
..and why do you think that? Was it announced that this would be a 12 episode show?

Offline
Nov 2010
163
Aw man, I don't usually tear up watching things, but this managed it. :/ Saaaad episode. Wonder what will happen next.
#36
MaxCrazy7

Damn it I should have known and I was so pump up about the festival.

Offline
Nov 2007
9158
Such a lovely episode! I almost cried in this episode. Hope Sentaro returns! This anime is due a good ending!

Why do I always feel like giving Rituko a hug every time she appears?

So there is another episode left? Yay! to the misleading number of episodes in TV Japan website.
#38
SerenityNow
Offline
Sep 2009
1
Shouldn't chop up onions while watching this...man the onions.
#39
NavyCherub

Offline
Jan 2010
1198
So much drama and so many mixed feelings, but that's on par. Once again I loved the parts involving music.


Kurogashi said:
What happened to the whole family drama in the beginning, wtf. They built that up and just let it fizzled out.

I feel like this is how all the drama in this show is handled. It's a blessing and a curse.

Offline
May 2010
82
Tears. A lot.
noitaminA has this power to make me cry. First in Ano Hana and then on Sakamichi.
I'll not ask to stop making me cry, because I'm crying with beautiful things. Things that, maybe, make you re-think the way you live.
Thanks for all the people that are involved with the production of this masterpiece. Thank you very much!!
#41
mochizou

Loved Ri'ko's way of singing, it was cute though.
#42
yamagoop

Offline
Aug 2011
2184
I personally don't think Sen will come back. I think it'd be more powerful if he didn't, but a part of me is hoping to God that he will!
#43
Nilinhow

Offline
Jan 2009
10
Wow. Highs and lows were almost unbearable from this episode. One moment you were smiling, the next you were in tears. What a powerful episode which clearly shows why this is one of the top this season
#45
Thalandor46
Offline
Nov 2008
409
My natural reaction to this episode is "The fuck kind of ending is that!?".

Wow Kaoru is an insensitive jerk. "Actually, Sachiko's in there..." "Oh! Nevermind. Bye!"

The electric guitar playing on the roof was really jarring for this series. After going through this musical experience all season, it just didnt seem to fit at all.

Other than that, fantastic episode as expected, particularly if it is indeed not the finale.

Offline
Jul 2011
88
I'm never prepared enough for this anime. When I think I've got it all figured out and can see what will be happening next it takes is and smashes it to pieces. But it's so so so beautiful and powerful, delivers so many emotions during this 20some minutes that I can't help watching it.
#48
Ragix

Aww dude.
That rooftop scene got me to shed some tears. T_T
I really wonder if Sen will come back or if he does how and when..
Feel sorry for the guy it just seems like everything just doesn't go his way at all. Then the meaning behind him leaving the rosary oh boy... It seems like he feels the world has already abandoned him.

Another great episode can't wait for next week which is I believe the finale? CAN'T WAIT!
#49
mococomono

Offline
Jan 2010
1371
So is the next episode the last or? Having read the manga I can imagine them being able to wrap it up in the next episode, but it will feel very rushed (and the last volume of the manga felt rushed enough, especially the last chapter).
Pages (4) [1] 2 3 » ... Last »
See All Discussions