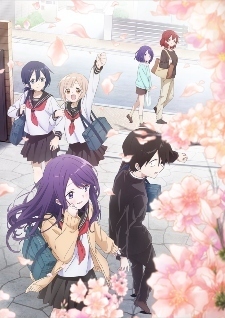 The official website of the Kubo-san wa Mob wo Yurusanai (Kubo-san Won't Let Me Be Invisible) television anime announced on Monday that episode seven and beyond will be delayed due to the effects of COVID-19 on the production.

The fourth, fifth, and sixth episodes are scheduled to broadcast as usual in the next three weeks. The series broadcast will then restart from the first episode in April 2023.

VIZ Media licensed the manga in English on October 9 and released the fifth volume on January 3, with the sixth volume scheduled to ship on March 7. The series is also simulpublished in English and Spanish on Manga Plus and VIZ Media's Shonen Jump website.

I’m gonna lose my ******* mind if I have to wait 3 WHOLE months for this.. this show is so good man like cmon. So dumb “cause of covid”… it’s 2023 man like come on we’re passed that. Why is this the only anime that’s struggling because of covid
#4
Rimuru0001
Offline
Apr 2020
233
Winter will no longer be stacked as the majority of releases will move to Spring + Summer .. an announcement is expected to come out soon regarding the delay of other series such as The Misfit of Demon King Academy II .. etc.
R.I.P Winter 2023.
#5
Nicole_Demara

Offline
Aug 2016
10
First Nier Automata, then Ayakashi Triangle and now Kubo-san getting potsponed cause of Covid, it was going great so far than it goes down the drain.
#6
Hylianticipated

Offline
Dec 2015
471
I’m convinced “Covid” is just the go-to excuse to cover for incompetence at this point.
#7
Softhenic03

Offline
May 2020
7609
Guess it's really covid this time which is unfortunate to say the least.
#8
Dudi4PoLFr

Offline
Jan 2017
540
Well winter 2023 will be a death season will all those postponed shows, I wonder how this will impact the 2023 Spring schedule.
#9
MegamiRem

Offline
Nov 2013
4147
The show restarts after episode 6. In other words, once it returns in April, it will still take about HALF season before we see new series (episode 7+). In other words, they're delaying the show not till April, but till the end of May!
#11
Bidoof_PMD-EOS

I’m gonna lose my ******* mind if I have to wait 3 WHOLE months for this.. this show is so good man like cmon. So dumb “cause of covid”… it’s 2023 man like come on we’re passed that. Why is this the only anime that’s struggling because of covid

It's the only anime, though. Ignoring Isekai Ojisan, there are 3 other shows this season which already announced that they were going on hiatus due to Covid.
Wouldn't be surprised if it started affecting next to half the airing shows, either.

Edit: If you want names, then Nier Automata, Ayakashi triangle and Unite Up.

Offline
Mar 2021
272
aw that's so unfortunate, i was really enjoying this adaption
#18
Antanaru

Offline
Aug 2008
4302
Sure, production falls apart because of cold. Would be nice if all these shows being postponed is a sign of an upcoming cleansing in the industry. I don't necessarily mean particularly these shows, but every season has more and more utterly worthless or below mediocre titles. I don't know if there's actually a market for all that crap but I highly doubt the number of professional animators and other production staff increased enough over these past couple of years to be able to handle this content diarrhea. Would be nice to have less, but better series instead.
#19
Klad

Offline
Mar 2013
527
Wondering how this affects airing schedules. We're what -- 3 postponed animes into the Spring?
#21
Kuma

Offline
Mar 2015
44792
Kaguyachinchin said:
Wondering how this affects airing schedules. We're what -- 3 postponed animes into the Spring?
4. kubo, ayatri, nier, and unite up.

deg said:
is this also an aniplex show? if so doubt the covid stuff
it is not aniplex show. it's kadokawa.
#22
Kaguyachinchin
Social Media Team

Offline
Mar 2013
527
Kuma said:
Kaguyachinchin said:
Wondering how this affects airing schedules. We're what -- 3 postponed animes into the Spring?
4. kubo, ayatri, nier, and unite up.
Golden Kamuy too right? (Although that was presumably not covid related)
#23
IslandMan05
Offline
Aug 2022
2
Time to start reading the manga. I’m already addicted to this and will receive withdrawals if I don’t make the necessary preparations.
See All Discussions