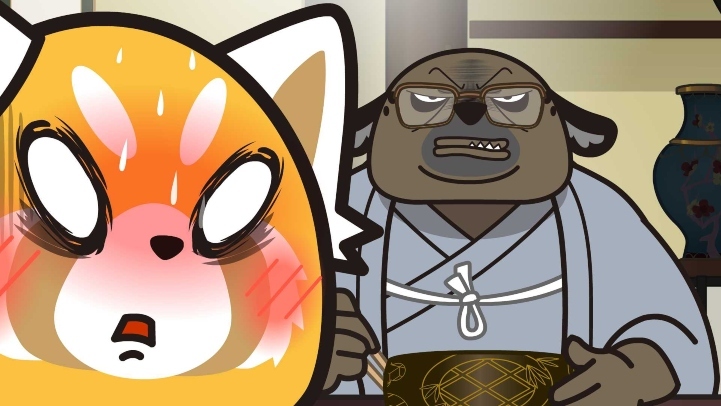 The first anime adaptation based on Sanrio's titular red panda mascot aired in 100 one-minute episodes from April 2016 to March 2018 on TBS' Ousama no Brunch program. TBS subsequently combined all 100 episodes and broadcast them in 10 episodes.

The first, second, third, and fourth season streamed exclusively on Netflix worldwide in April 2018, June 2019, August 2020, and December 2021, respectively. A Christmas special titled Aggressive Retsuko: We Wish You a Metal Christmas debuted in December 2018. Rareko returns to direct and pen the script at Fanworks.

Synopsis
Some offices have stereotypical dynamics: the chauvinistic pig of a boss who never does any real work; the employees whose goal is to suck up to the boss; the ones whose lives seem perfect; and the individuals who have all the actual work pushed onto them. Retsuko the red panda is in the last group, as she stays late most nights to make up the work her coworkers are too lazy to do themselves.

Her relief from the stress of her everyday life comes in the form of singing death metal at a local karaoke club. Night after night, Retsuko channels her grief into a microphone and considers the place to be her own personal sanctuary. But as she moves further away from her comfort zone and the ideas people have of her, she discovers that letting others into her world of death metal may not be such a bad thing. [Written by MAL Rewrite]

Offline
Dec 2020
740
loved this series, glad its coming back for another season ! kinda fell out of it after s3, but im still excited :)
#4
Kumiveneella

Offline
Mar 2019
274
Really cool to see a new season of this. I guess something conclusive will happen in this one compared to the last season.
#5
Gear707

Offline
Dec 2009
8303
A lot of people disliked the fourth season.
While it was a sudden change in plot and odd delay/concept to the pairing's relationship who we've been wishing to succeed which hasn't yet... It was an intriguing plot, even if it felt out of place,

but it was very well done and a unique way to display change of character through evolution which isn't bad.
Sad and kinda surprising that this will seemingly be the final season, but if so, I've enjoyed the ride and look forward to this last season.