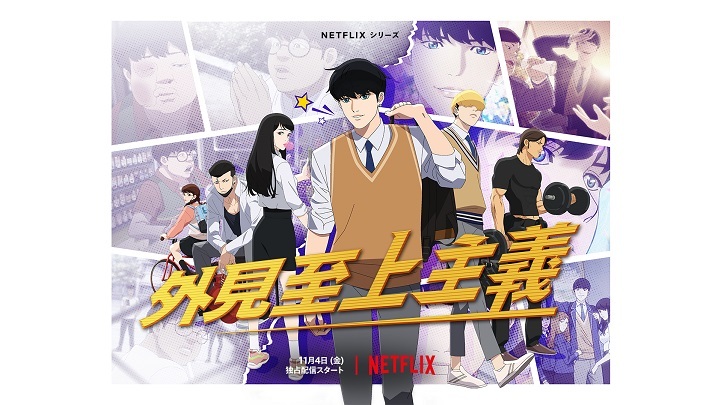 The Netflix TUDUM Japan event announced an anime adaptation of Tae-Jun Park's Lookism manhwa on Sunday, revealing a teaser visual (pictured above) and teaser promotional video. The anime series, produced by Studio Mir, will stream worldwide on Netflix under the title Gaiken Shijou Shugi on November 4. 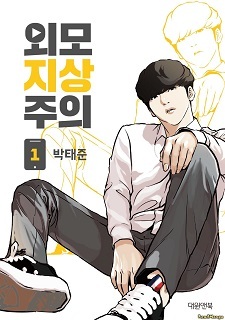 Park launched the action drama manhwa on the Naver Webtoon (now Line Webtoon) webcomic portal in November 2014. The 20th volume went on sale on May 20. LINE Webtoon began releasing the title in English in June 2017. Line Manga also serializes the manhwa in Japanese, with Kadokawa publishing it in print format.

Synopsis
Park Hyung Suk has spent all 17 years of his life at the bottom of the food chain. Short, overweight, and unattractive, he is used to being bullied by his classmates and constantly discriminated against for his looks. In an attempt to escape his biggest bully, Lee Tae Sung, he decides to transfer to Seoul's Jae Won High School, a vocational preparatory school notorious for its liberal education system and carefree students.

Days before his transfer, Hyung Suk wakes to find that he is no longer in his usual chubby body, but is instead in a perfect body! Tall, handsome, and beautifully toned, Hyung Suk has become the ideal version of himself. The only problem is that his original body still lays beside him—and when one body falls asleep, he awakens in the other.

Now possessing two extremely different bodies, Hyung Suk must learn to navigate his new and much more popular life at J High whilst also solving the mystery of where his second, almost superhuman, body came from. [Written by MAL Rewrite]

Offline
Sep 2020
3455
Lookism is one of my favourite Manhwa. Never thought this will get an anime adaptation.
#4
lizzziziz

Offline
Dec 2020
3852
not really surprised, it looks Okay so far. the released pv was in korean dub, i wonder how they japanese one will be? if we do get one lol.

Offline
Aug 2022
343
Ngl, I know it's studio Mir, but that trailer looked horrible. Generic art, mediocre animation, nothing really stood out. Haven't read the manhwa, but this feels like a huge pass so far.
#6
AshenChivalier
Offline
Jan 2017
103
this series is shit, but i wanna watch the dumpster fire that will be the anime
#7
Softhenic03

Offline
May 2020
7124
That time isn't very far now when we'll see the adaptations of those degenerate manhwas too.
#8
GG-WP

Offline
Mar 2015
44357
how i wish this manhwa actually about self improvement or adaptation, instead fight bully then bigger bully then even bigger bully and so on. good for fans but i am going to pass.
#11
FMmatron

Offline
Nov 2016
29425
I've only read a few chapters, but this legit funny and something that shouldn't suffer that much from the usual Netflix problems. Nice!
#12
Swagernator

Offline
Apr 2016
17732
Oh look, manhwa about how fake korean society is, adapted by no other than netflix.

lmao. Good joke.
#13
chibi-tan-chi
Offline
Nov 2020
19
Yeeeessssssssss I wanted to read this anyway and now that this is getting adapted than it's just a matter of time when other good stuffs like Eleceed, Omniscient Reader gets adapted
#14
RobertBobert

Offline
Apr 2012
12925
Netflix continues to adapt Korean manga - there should be a sarcastic joke about how Netflix panderint to the weebs, but I did not come up with it.
#15
Maruseru93
Offline
Jun 2020
390
its a ok manhwa but way to many chapters i would prefer if manhwas like

how to fight or her summon getting an anime
#16
RealNath
Offline
Oct 2020
171
Vindstot said:
under the title Gaiken Shijou Shugi
Is this supposed to imply that it's a Japanese production? If so, it's produced and animated in Korea. That's just the Japanese name. Pretty sure the one in database should be written in romanized Korean, not Japanese romaji.
RealNathSep 25, 4:38 AM
#17
Tokoya
The Komori

Offline
Apr 2018
4722
Ive only read about 70 chapters but this does have decent character development and a well-developed early cast. But, it relies more on fights than working on yourself.
#19
Memore

Online
Jan 2016
358
Heard some mixed reviews about Lookism, some say its good,some say its not.
#21
Rapidexal
Offline
Oct 2019
9
I'm really excited and the announcement video looks pretty good so far.

Hope this goes well but I am just a little concerned that Netflix picked it up, though if Lookism was going to get an anime it was probably gonna be Netflix
#22
Rapidexal
Offline
Oct 2019
9
chibi-tan-chi said:
Yeeeessssssssss I wanted to read this anyway and now that this is getting adapted than it's just a matter of time when other good stuffs like Eleceed, Omniscient Reader gets adapted

I didn't even think about that, this could be the start of other manhwa and maybe even manhua getting adapted into anime :O
#23
CQLLIST

Offline
Jul 2021
5914
Netflix likes to ruin my hype but I'm actually looking forward to this
#24
RealNath
Offline
Oct 2020
171
lizzziziz said:
not really surprised, it looks Okay so far. the released pv was in korean dub, i wonder how they japanese one will be? if we do get one lol.

kinda missing the early parts of lookism so im def gonna read this
There is one already, it's in the Netflix web/app.
#25
chibi-tan-chi
Offline
Nov 2020
19
Rapidexal said:
chibi-tan-chi said:
Yeeeessssssssss I wanted to read this anyway and now that this is getting adapted than it's just a matter of time when other good stuffs like Eleceed, Omniscient Reader gets adapted

I didn't even think about that, this could be the start of other manhwa and maybe even manhua getting adapted into anime :O

Offline
Oct 2018
1482
This looks so poor in every department of the production. Going to be a skip.

Offline
Feb 2019
2297
How the hell did they manage to make his "attractive" version uglier than his real one? Awful. Pass.
#29
Infernalization
Offline
Dec 2020
299
Manhwa series*
The language in the trailer was obviously Korean instead of Japanese.
#30
VillainessGlamor

Offline
Sep 2022
59
I’m glad more manhwa are getting adaptations. I used to love this Manhwa but I would say it’s not that great anymore. But hearing that it’s getting an anime is great news :D
#31
Rickydory123

Offline
Dec 2016
1307
I was really looking forward for Lookism to get an anime announcement but it's kinda disappointing that it wasn't taken by a notable Japanese studio like Solo Leveling. The animation is not how I was expecting. But anyway I hope it gets japanese dub too cuz I can't get myself to watch the Korean dub.
#32
Haaruukaa

Offline
Sep 2022
249
I'm really happy to see more manhwa getting anime. I was considering reading the manhwa a couple weeks ago, so hopefully it's good and I can give the anime a try, too, lol. Either way, hopefully they keep turning more and more manhwa into anime; there's a lot of hidden gems that deserve the adaptations already.
See All Discussions