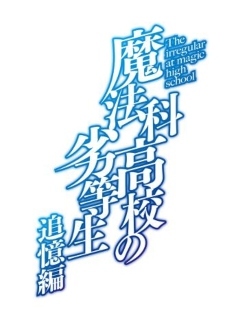 Synopsis
Looking at Miyuki and Tatsuya now, it might be hard to imagine them as anything other than loving siblings. But it wasn't always this way..

Three years ago, Miyuki was always uncomfortable around her older brother. The rest of their family treated him no better than a lowly servant, even though he was the perfect Guardian, watching over Miyuki while she lived a normal middle school life. But what really bothered her was that he never showed any emotions or thoughts of his own.

However, when danger comes calling during a fateful trip to Okinawa, their relationship as brother and sister will change forever… (Source: Yen Press)

Madhouse produced the first anime season in Spring 2014 and 8bit the second season in Fall 2020. An anime film opened in theaters in June 2017.

Satou and Yu Mori's spin-off manga Mahouka Koukou no Yuutousei (The Honor Student At Magic High School) has a television anime adaptation in production and is scheduled for 2021.

Mahouka Koukou no Rettousei: Tsuioku-hen on MAL
DatRandomDudeMar 1, 2021 6:33 AM
#2
Illyricus

Offline
Feb 2020
7283
Wow. Finally, the missing arc. I hope they keep adapt every arc, tho, my expectation still low.
#8
HueBrDeus

jc9622 said:
That's a surprise...I thought the 2nd Season would be a "one and done" season like every other shows out there with a sequel.

I thought so too. Yes, I know that recently Dengeki has decided to give a huge push to their adaptations, but I didn't think they would be so serious about developing Mahouka as well. Perhaps this has something to do with the fact that Mak-sensei was appointed director of the brand's multimedia division.

Offline
Jun 2017
6934
Definitely a surprise, I was thinking that S2 alone was enough for advertising the end of the original source but it appears I'm wrong and that too, much to my delight.

To be honest, I was even more certain when the side story got green-lit for an anime adaption but well.

Onii-samaBROS we can't stop winning with the adaptations.

For anime only, don't expect for onii-sama and lovey dovey moment. It's flashback from 3 years ago.

No onii-sama (Miyuki did not call tatsuya onii-sama yet).

No lovey dovey in this arc.

Offline
Jul 2014
2
Ayyeee~~ But Damn, am I excited for this!! <3
I was hoping they'd make at least an OVA of this so, yay!! So glad to see this all animated. Now here's to also hoping a season 3 (sequel) is announced after this (if not sooner). lol
#26
reny1966nanin
Offline
Oct 2020
154
Note : SAO & Mahouka rettousei have voice actor (Hayamin, tsugu-tsugu and Tomatsu) and Lisa to bring both anime have many seasons and spin off
#27
antigraviton

Offline
Aug 2018
80
HueBrDeus said:
God does exist after all.
Yes: Producers who get it and adapt quality material to make good amine = gods. :)

Prequel.
It tell story 3 years before season 1.
#31
japzone
Offline
May 2009
204
Augusto_178 said:
So is this Special going to happen after Season One? I've finished First Season now, so I think it's better to wait for Tsuioku-hen to come out to see and then go on to Second Season ^^
This is based on Volume 8 of the LN, which would've been between Seasons 1 and 2, but most of the volume is comprised of a flashback to years earlier, explaining the relationship between Tatsuya and Miyuki, as well as explaining the complicated situation that they are in.
See All Discussions