What did you think of this episode?
5Loved it!
4Liked it!
3It was OK
2Disliked it
1Hated it
View results
DO NOT discuss the source material beyond this episode. If you want to discuss future events or theories, please use separate threads.
DO NOT ask where to watch/download this episode or give links to copyrighted, non-fair use material.
DO NOT troll/bait/harass/abuse other users for liking or disliking the series/characters.
DO read the Anime Discussion Rules and Site & Forum Guidelines.
Pages (3) [1] 2 3 »
#1
Stark700

The episode immediately starts out with Shingo showing some of his powers. They actually introduced the main female cast already in this first episode although I think they'll get a lot more screen time later this season.. And also, we do get to see a lot of Shingo in his kid form as a way to show his history. That Alfred guy is pretty tough as he shows his powers near the end of the episode. Maybe he'll a learn a lot from him.

Animation is ok, nothing too special. 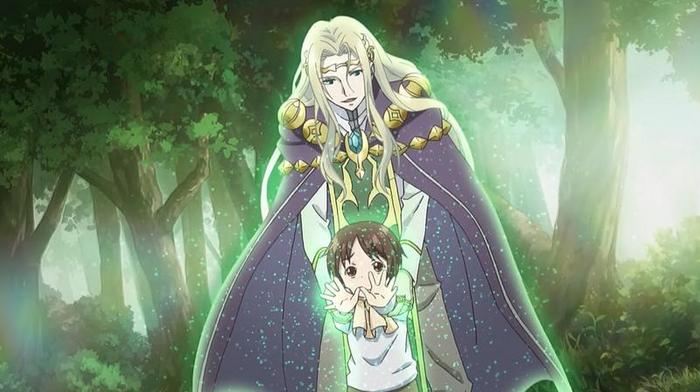 Offline
Mar 2020
855
The 8th Son? Are You fucking Kidding Me?
#3
Notifications
Offline
Feb 2020
168
Imo it was actually pretty good. I notice other isekais spend like 30 seconds showing the MC entering the fantasy world. I have a feeling this might turn out like Isekai Cheat Magician but im still looking forward to it. During the premiere on crunchyroll collection people kept talking about the cg but from what i saw it wasn't relevant at all, at least not in that episode. Also this reminds me alot of Wise Man's grandchild with being a kid and all then collecting a harem.
NotificationsMar 31, 2020 1:33 PM
#4
Piromysl

Offline
Jul 2015
7472
Looks totally generic. Not bad, not good.
Will watch, but most likely it will be completely forgotten once it finishes airing.
#5
InsaniumX
Offline
Dec 2017
8
Was not impressed in the slightest. It better hope to improve as it goes on
#6
TheIsOtaku

Offline
May 2013
475
This just screams being kenja no mago 2.0. Bland looking mc plus his harem and a magician who teaches him cause of his high affinity. No truck-kun this time but wtf happened to him, did he get a heart attack or choke on the food, welp we will never know.

shii if im still on this b in three months
#13
-shaker-
Offline
May 2016
13
pretty shit for a fist episode imo. but the potential for this to be a fun watch is there.
#14
Kobeanie

Offline
Mar 2017
1984
Nothing revolutionary as far as Isekai is concerned, but if ain't broke don't fix it right? I really liked this first episode. There was some good comedic scenes and the reveal that this noble family is dirt poor was unexpected.

I'm concerned though cause I saw a shitty CG dragon in the Op... which is dope btw

The episode wasn't that bad tbh. I kinda enjoyed it.

We got to see the past of the mc, Shingo. I guess we'll be seeing more of his past.
#16
Ashhk
Shalltear

Offline
Apr 2018
30740
After first episode i'm absolutely not confident about this anime, I'm afraid of an Isekai Cheat Magician V2
#17
deathnate4
Offline
Jun 2016
5
TheISOlatoR said:
This just screams being kenja no mago 2.0. Bland looking mc plus his harem and a magician who teaches him cause of his high affinity. No truck-kun this time but wtf happened to him, did he get a heart attack or choke on the food, welp we will never know.

Pretty much, except with better art and animation.
#18
Mike98

Offline
Jan 2020
207
So far I dont really know what to expect. The beggining was confusing also.

It seems like this will be another overpowered MC that seeks harem type of anime.

Offline
Feb 2015
1940
This was lazy as fuck. Basically he falls asleep waiting for his rice to cook and then bam isseki time. I hope this gets better
#22
Groenboys

Offline
Mar 2018
539
For now, this anime is a poor mans Ascendance of a Bookworm, which ironically has a second part airing this season.

The animation is cheap, the story is fine but done before, the ost sounds also cheap, all the characters fail to make an impression (even the main one) and overal this anime feels cheap.

I don't hate it tho, there is potential to be had with this anime, but for now I give this a "Watch Ascendance of a Bookworm season 2" out of 10.

#23
AmazingMatt
Offline
May 2019
249
Well the first episode was alright, this is kind of an average anime but might be worth smth... it reminds me of kenja no mago and isekai cheat magician but it might be decent? I mean in isekai cheat magician the last 2 episode were kinda good and they did a show us smth for later i hope this anime will be better
#24
ThatDeadMikey

Offline
Aug 2017
231
Another Isekai but I had fun watching it although it has a Honzuki vibe to it.
Hoping this to be more fun 😁🤞
#27
Oomyung

Offline
Sep 2010
384
This looks like its gonna be trash, but I'm a sucker for trashy Isekai. I'll give it a shot. That being said, the CGI in the intro did look truely horrible though.
#28
Tatsuya

Offline
Jan 2009
507
TheISOlatoR said:
This just screams being kenja no mago 2.0. Bland looking mc plus his harem and a magician who teaches him cause of his high affinity. No truck-kun this time but wtf happened to him, did he get a heart attack or choke on the food, welp we will never know.

Haven't watched it yet, but i can say this much from what i read of the manga, this series seems to get better as it goes on, the character is op, but it can be a good series if they both don't rush it too much, but also don't dwell too much on the beginning.

Oh and they'd have to really screw this up to make it as boring as kenja no mago and isekai cheat magician.
#29
-Lei

Offline
Jan 2020
3025
Animation is good might give couple of eps & see how this goes.
I still dont like how the mc passes wth no reason
#30
KatoWorks

Offline
Jan 2020
703
pretty cool athough generic fantasy setting
#31
gabi_581
Offline
Feb 2018
1
ok but where can I watch it online, can't find it anywhere :(
#32
WhiteTail8
Offline
Feb 2020
27
This is nothing special but I found the first episode to be enjoyable enough definitely worth watching another episode to see how the story develops.
#33
jawsome274
Offline
Dec 2019
29
This episode was pretty fun. I'm actually pretty unfamiliar with the isekai genre so what I find interesting is probably "been there done that" for everyone lol.

CGI in the opening is absolute garbage and I hope I never see anything like it in my life ever again.

Offline
Jan 2014
1295
This was average at best. They ruined it's story by showing him all grown up in this world already. I know stories can be told and still be interested within the build up to that point. But not here, this was done poorly. Not to mention the generic idea of 'Oh this kid is gonna be the strongest magic user' basically. Not really a fan, I'll keep up up with it, but so far it's pretty bleh.

The backgrounds are at least pretty though.
#35
Tougen

Offline
Jul 2015
992
The director made a good decision to show that this is Isekai Harem with a production quality the likes of Isekai Cheat Magician. I know I can't expect anything from the very first second.

Under normal circumstances, this is a drop, but I'm on lockdown anyway... might as well try to watch a few episodes.


#37
TodAboT
Offline
Jan 2018
903
It's baffling to see that people actually have expectations for this pile of garbage.
From the overdone concept with barely any originality, to the terrible CGI, this might get a worse rating than Kenja no Mago at the very least.
#38
winddevil1

then again, one of the best parts is probably the girls, and we still didn't see much about them
#39
AnonymousGuy9

A mediocre start. Hoping for this to get better

Offline
Nov 2016
29900
Well, let's try to look at the positive aspects, with somemental gymnastics you could try to perceive it as a parody...

Shitty joke aside, I would rather take a so bad it's enjoyable type of series over this.
#42
Roch2001
Boss Level

Offline
Jun 2015
1862
I went with a tentative four. It reminds me of the bookworm girl from its premise, and not sure if deliberate or unfortunate its running along side her second season. Still. It has magic, giant hogs, and nobles. What could possibly go wrong.

I've also told my boy he is the first son of the fourth sister, so no magic for him. He was nonplussed and just scowled at me.
#43
ahneeme
Offline
Feb 2012
707
this is Bookworm's bastard meth addicted brother that everyone tries their best to pretend doesn't exist
#44
EfiChan

Offline
Apr 2010
3713
A little bit confusing with all those jumps, but it looks like it can interesting.
#45
Kasuminguis
Offline
Jun 2019
2
It's another Isekai, only it has a different way of entering that world. I hope I'm wrong and that it varies a little
#46
Nieznajomy43

Offline
Dec 2016
2650
TheISOlatoR said:
No truck-kun this time but wtf happened to him, did he get a heart attack or choke on the food, welp we will never know.

Most likely just overworking, I too sometimes fall asleep when I'm sitting doing nothing or working on computer.

Offline
Feb 2019
5315
Been waiting on this one for a while. Dollar store bookworm. Isekai is my favourite genre so I’ll watch anything isekai. I know people like to shit on the genre and call anything that’s remotely similar “generic” but that’s what I love.

Art and animation looks excellent, great voice cast, nice. I’ll have to check out the LN’s too.

Also it’s the same studio who did doraemon and takagi san so you know the quality will be there.

OP didn’t really fit the tone of the first episode but I’m sure the series will grow into it, just like the MC.

Edit: how the hell does this already have a low 6 on MAL? Why are scores even allowed to be calculated one ep in? Seems like the same “I hate isekai” crowd just watch eps to rate them poorly.
#48
AmineDane

Offline
Mar 2019
169
Man I love stupid shows like this. When he was realizing how many brothers he had it made me laugh so hard. The 8th son lmao.
#49
Weapon404

but hey, atleast the first episode was nice.

#50
HeroVladimir93
Offline
Jan 2017
1039
As we all know, anime is a highly competitive market and creators have to offer something new and different to audiences, lest they will be labelled as generic and repetitive. It's been just one episode and, so far, I haven't seen anything that helps this show distinguish itself from its peers, be they from fantasy or isekai. All stories within these 2 genres get formulaic sooner or later, but right now, nothing from this show strikes me as original or attractive.

Well seems like a good guy, but unfortunately, his protagonist cred is pretty for now. Most of time, we just see him reacting to the new world and he doesn't seem to have any meaningful interactions with his supporting cast. The supporting characters barely have any roles beyond expositors who just inform Well about what's happening. The only character with any semblance of personality, aside from Well himself, is the wizard at the end of the episode.

The biggest failing of this episode, though, is that it lacks a hook, something to get viewers emotionally invested in the story and characters. That said, this show has potential and I genuinely hope it can turn things around.
Pages (3) [1] 2 3 »
See All Discussions