What did you think of this episode?
5Loved it!
4Liked it!
3It was OK
2Disliked it
1Hated it
View results
DO NOT discuss the source material beyond this episode. If you want to discuss future events or theories, please use separate threads.
DO NOT ask where to watch/download this episode or give links to copyrighted, non-fair use material.
DO NOT troll/bait/harass/abuse other users for liking or disliking the series/characters.
DO read the Anime Discussion Rules and Site & Forum Guidelines.
Pages (11) [1] 2 3 » ... Last »
#1
Stark700

OP song is catchy and I think there's some hints with the graphics played with the sequences. Plenty of "action" already though. Mai was fun to watch when she fought that "monster". Actually, I think the put way more action than I had thought lol. I'm guessing we'll learn more about Mai as a person soon. It kinda felt like the episode dropped the viewer in the middle of the story. Haven't read the LN before so going to see how this will go.

Reina is such a big eater 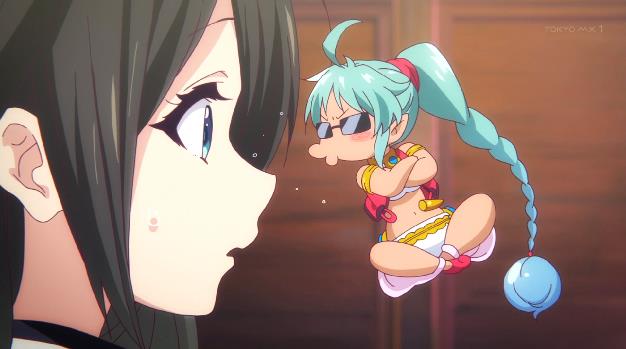 Hard to take the Phantom stuff seriously so far but whatever. They really put a lot of fan service on Mai LOL

Offline
Mar 2013
7077
All I have to say for now is I was watching for the blonde and man did KyoAni find a way lol.....Dat fanservice was all I needed xD

EDIT: I must say that they did a decent enough job at introducing the world and the mechanics pf things as well as how things came to be

What shocked me the most however was that this series is actually felt aware of itself and that is something that made me like it even more so add that plus the lack of over the top fanservice (Albeit the fanservice for Mai that we got was great lol), I think that this series will be okay

I heard that this will get dark later on so hopefully things will look up from here character development and plot wise
TokoyaJan 6, 2016 11:11 AM
#3
Ahenshihael

Offline
Jul 2007
23708
Had to check this out, purely out of morbid curiosity whether KyoAni could make something even more trashy and incomprehensible than Kyoukai no Kanata was.

Color me surprised. They actually managed to make worse show.

The OP song and video(both of which just scream "this is battle school chuuni LN adaptation, stay away") alone should have made me guess that, but there's no redeeming qualities here. I'd actually go an say that this is the most homogenized generic "product" that Kyoani has made so far(and that is hard to achieve considering how the rest of their portfolio is):
- Chuuni terminology and "concepts" up your ass
- Generic "Japanese teenager" black haired protagonist with no personality beyond being a viewer stand-in.
- A cast of fanservice girls in KyoAni's usual "style", complete with overblown tropey personalities.
- Utterly generic story that meets every possible trope and most likely will make no sense in the end.
- The animation style that makes it impossible to discern from 6553566 shows that aired and will air.

What a way to start a year and a season.
Musaigen no Phantom World does one thing - it makes me sure that there's nowhere else to go but up with the rest of shows this year.
#4
JetNoir

Offline
Jun 2013
484
I dont know what people are expecting, but this was the 4th ranking novel in their 2012 contest - which means this is one of kyoani's worst IP. As throughly Ln-ey as it gets.

I just came here for glorious kyoAni fanservice. Average premiere outside top notch kyoani production values, not sure if I'll really follow this.
JetNoirJan 6, 2016 9:57 AM
#5
Going_Seafoam
Offline
Jun 2014
925
>that fucking bouncing
Kyoani does it again. 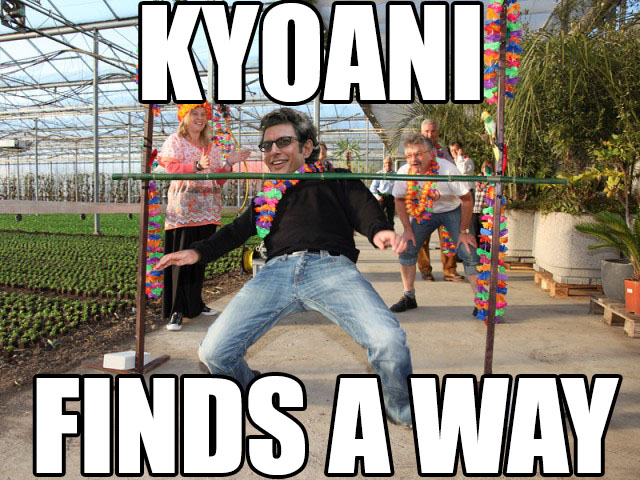 Lol that scene was epic.

The fanservice in this series is used in a smart way tbh.

Offline
May 2009
8139
melodisz said:
Kyoukai no Kanata + Chuunibyou + fanservice
Reina's "onee-sama" really reminded me of Mahouka.
Because it's Miyuki
#12
rsc-pl

Offline
Aug 2013
5034
Not bad start. Awesome animation and nice way to show fanservice. I like it. Top quality art. Well it's KyoAni, so nothing strange about it. And I loved that part when he didn't grab Reina's tits.
rsc-plJan 6, 2016 10:16 AM
#13
therandomestguy

Offline
Jul 2012
373
Looks good so far. I think I like Mai and the pixie-like girl so far, not sure if I like the girl who sucks stuff like Kirby though yet. I probably won't like the short-haired girl they walked past near the end of the episode.

Offline
Aug 2013
6806
Ruru is already the most annoying thing of the show. Wouldn't mind if she were to turn evil somehow and had to be ridden off. I doubt she'll improve anyways.

The plot is ordinary and filled with cliches like one would expect, but the animation quality is top notch, which happens to be the strongest aspect of the show. The fanservice bits are palatable as well, although I wish Mai didn't have to fondle herself every time she'd use her abilities.

#15
Azukano
Tabibito-kun
Offline
May 2013
9
So far a good start. As expected from my favorite anime studio.

This anime also gives more fanservice moments than previous KyoAni works as well (which I don't really mind, but the last limbo scene and Mai's chest remind me of HOTD which I did not really enjoy too much).

Other than that, it had a interesting start. Looking forward to seeing more of this show.
#16
Mascera

Offline
Sep 2014
5238
Yeah well ^^ I've grown off fanservice, so this might not be an anime that is up there this season for me. It's decent, nothing more and i doubt that this will get any better or worse.
#19
IZEROII

Offline
Jan 2011
1662
Say what you will but this was very enjoyable. Fanservice was present but not center piece nor obtrusively in your face or tasteless so idk why the comment focus. It was never going to be a stellar drama, etc from it's initial presentation.
#20
Tohka_Yatogami 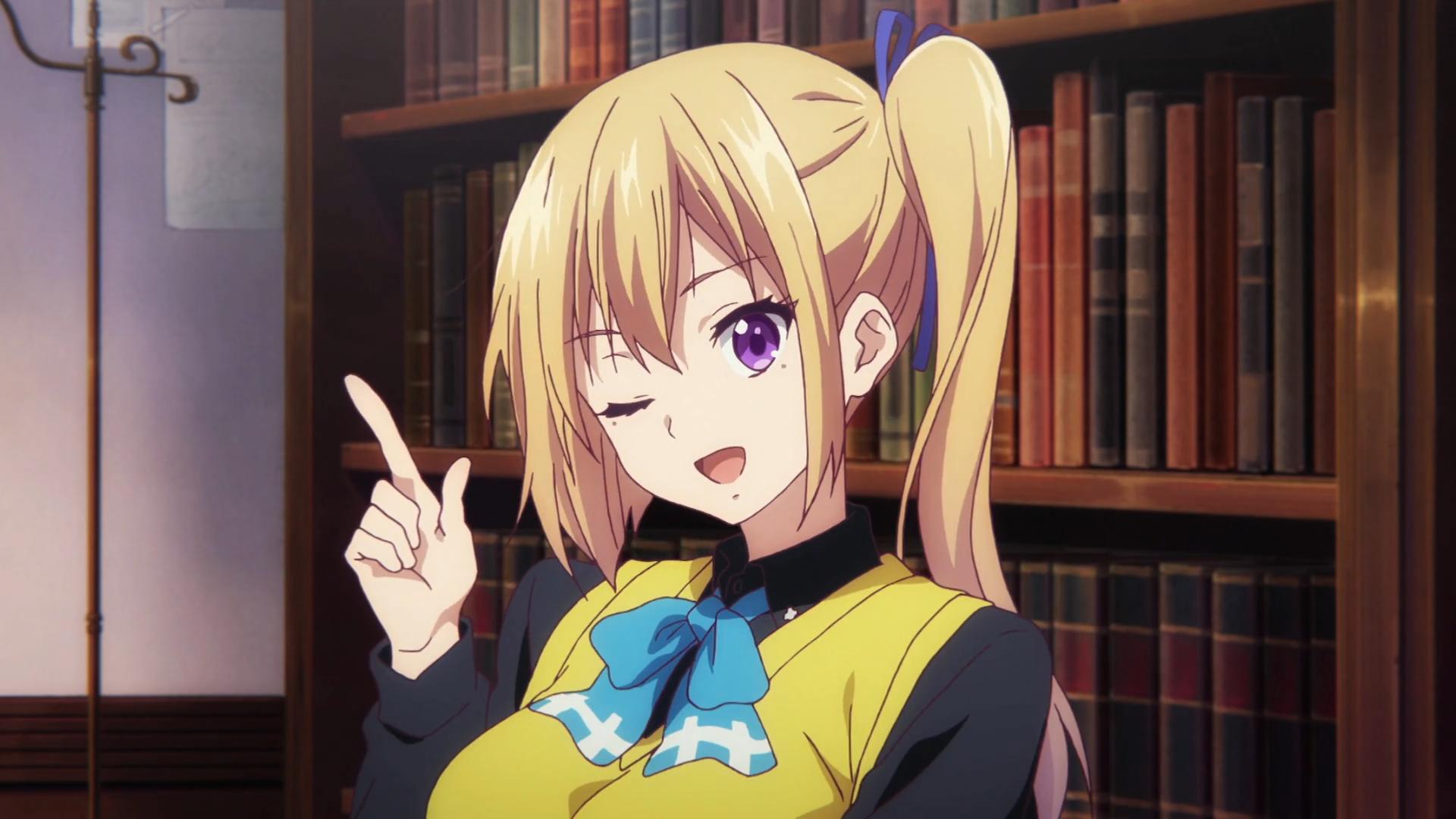 idiots standing around only offering half-assed motivation and cheers from the sidelines.

Amazing visuals, cast of fun and diverse characters (yeah, they hit certain tropes but all characters do nowadays), silly "science" description for why this happens and I'm totally cool with that, fun use of phantoms so far so they aren't just generic.

Despite that, the fanservice wasn't really explicit. They had so many opportunities for upskirts but they avoided them. The tit thing was pretty damn obvious but when compared to the fanservice in something like Asterisk War, this was done somewhat modestly and also in a funny, clever way instead of Asterisk War's episode one going "Guy walks into room, girl is in panties, long panning shots and then he runs into another girl who sticks her tits in his face and then pulls up her shirt to show her thong straps to him".
#24
Vevca
Offline
Sep 2014
164
It really reminds me of Amaburi. I can't be the only one right?

WHO CARES ABOUT DECENT PLOT OR ORIGINALITY WHEN YOU CAN HAVE ALL THESE QT 2D GIRLS RIGHT ( ͡°; ͜ʖ ͡;°)🔫
I hope this chinese cartoon eases my loneliness

Offline
Aug 2008
4282
Crappy duo of a super strong girl and a complete wimp voiced by that guy who's in way too many shows recently routine. That's one poor start. And how to NOT write characters. I admit, I watched it past the 5 minute mark only because of the fairy. Ok, ok and bloomers...

Sadly, it seems like another series that could be half decent if it wasn't for an unbelievably shitty MC. And really? "It's a common knowledge but I'll explain anyway"? Scriptwriter should get his ass kicked for something like this. I'm not sure what to think about breasts dodging limbo though... HOTD comes to mind... Anyway, it's hard to run a show on fanservice alone so it will probably be a drop soon.

Who would have thought years back that KyoAni will become an epitome of almost everything that is wrong with anime industry now.
#27
ExceedOmega

Offline
Jul 2015
121
Let's hope for a decent plot to be worked out...
#28
IceAxolotl
Offline
Jun 2015
5
I thought it had a pretty good start for an anime. Mai seems very interesting and the opening and ending songs are very nice to hear. I especially like how they practically made it feel like if Chunnibyou actually became real.
#29
Tyrel

One more person to post a 'You salty?', 'You mad?' and or baiting images to people will receive their Trolling warning/ban instantly.

Offline
Aug 2008
4596
Limbo scene and bouncy boobs are the highlights.

Does anyone know what are the two dots on Mai's face? Are they just moles?
#34
allenjke

Offline
Jul 2012
1751
Seems like people like it, but as KyoAni fan and after great Euphonium really dissapointed or kinda hyped it up for nothing. I think i would be amazed if the story will have some extraordinary twist, about the fanservice just don't care. So here are just the standart KyoAni graphics. Don't know if i will try 2nd episode cause the 1st one for me was like an hour long =/
#35
neonBdragon

Offline
Jul 2012
2247
This was surprisingly interesting to watch.

The OP is really upbeat and catchy.

So the team actually formed rather quickly. They even found there last member all in one episode.

Offline
Aug 2015
21719
Plot seems interesting, not a huge fan of all the fan service. I don't mind a little but I hope this series doesn't rely on it. Spent more time looking at the boob physics then paying attention to the show ffs.
#38
metsujin

Offline
Mar 2015
7
My expectations for this show weren't as high as, say, Sound Euphonium!, but I at least had more fun here than watching the first EP of Asterisk and Amagi Brilliant Park. Nice characters and animation so far, and I'm happy they avoided the classic "MC touches boobs of female character" with something less generic.

That bouncing scene though, lol.
#42
Antanaru

Offline
Jun 2015
11
Not bad for a first episode. At least we know what a phantom is. Though my favorite girl in the show is the one voiced by Saori Hayami. Also the OP theme is pretty catchy and I love it.
#44
Atavistic

Offline
Jul 2014
5095
Hmm, not too bad a start, even with the excessive Mai fanservice (not as though I'm complaining too much). The Phantoms at this point aren't too easy to take seriously - after all, I just saw a limboing utility pole - but I'm sure that's something that will be improved upon in due course. The characters are decent so far, but not yet anything special. Animation is, as you'd expect, top notch though. The OP song's pretty good as well, though the ED is a tad too generic for my liking.

Also, what was up with the forward-facing pigtails on that one little kid? That is going to annoy me way more than it really should.

Offline
Dec 2013
10536
I absolutely loved it. The overblown fanservice and cliches aren't that bad when there's so much effort put into it. And the episode in general looked top notch.
#47
removed-user
Offline
Jul 2018
570662
It was okay-ish. A bit too much on the fanservice, even if the show is somewhat self-aware of how stupid it is, which was shown with the Stair-Scene. If they tone down the Boob-Fondling and focus more on the animation it could be quite entertaining. They fairy is annyoing af though.
#48
Skullcrusher Just because you are aware of it does not mean you have a pass for overloading it with fanservice...
I mean its cleaver how you did it and all but...
Whatever I'll still watch it because your art is beautiful as always and Reina is freaking cute.