Diamond no Ace: Second Season - or "Groundhog Day"? I really do feel as if we've danced this dance before - but I guess a series has to be true to itself... 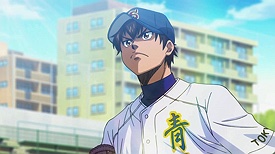 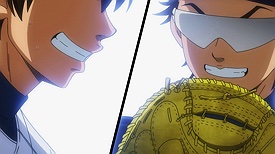 Ah, Diamond no Ace - we've been together for what, 90 weeks now? And yet you still have the ability to draw me in and leave me feeling pissed off. This has always been the sports series that gives with one hand and takes away with the other, so the feeling I get watching this episode is certainly nothing new. But that doesn't in any way lessen the irritation I felt when the ED credits started rolling. 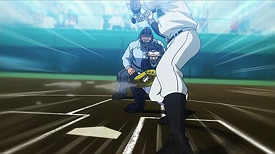 To start with the positive (and it's no small positive) this was certainly a very good episode - a riveting one in fact. No current anime is easier to predict than Ace of Diamond - when Eijun pitches, you almost always get great dramatic results. And Kataoka certainly inserted him into a ready-made dramatic dynamo, with a one-run lead in the top of the 9th and Umemiya due up second. 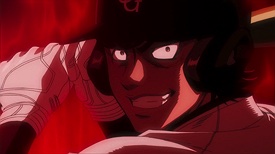 This was one of the more tense situations Daiya no A has conjured up since the Inashiro game, with the crowd in the stadium worked up into a rabid frenzy pulling for the Ugumori upset. And when the first batter legs out a seeing-eye infield single off Eijun's glove, they go even more crazy - because Umemiya-kun is up next. This is the sort of a situation that's a crucible for any pitcher, especially a young kid like Eijun - how does one respond to the kind of open antagonism he's getting from the crowd in a situation as dire as this one? 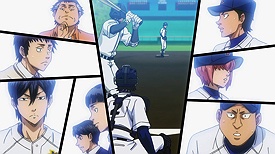 It's a great battle with Umemiya, who for all his faults as a pitcher especially is undeniably a gamer - he lives for moments like these. And Eijun's cause isn't helped by the fact that the home plate umpire is being influenced by the crowd, calling every close pitch a ball. And Kataoka has instructed his battery not to challenge hitters inside, which to me seems like a show of no-confidence in his pitcher. 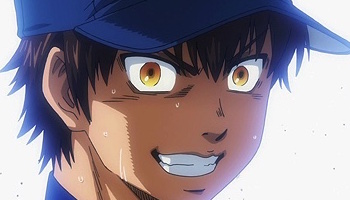 I was very happy with Miyuki in this episode - I liked the way he tried to loosen Eijun up before the inning, and I liked the faith he showed in him even after Kataoka's instructions. After a long battle with Umemiya is was clear that Eijun had to challenge him inside - Umemiya was spoiling close pitch after close pitch low and away, and Eijun was aching to challenge him. This is why Eijun has the makings of a true ace - he's capable of facing down the moment and facing down his own demons. That's the sort of pitcher you want to have the ball when everything is on the line. 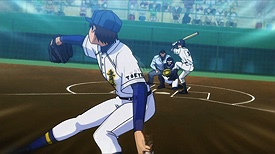 But that cliffhanger. Dammit, that cliffhanger. I knew it was coming from about the 16:00 mark, when I started checking the slider nervously. The buildup to that 2-2 pitch to Umemiya was nursed for a good four minutes at least, and that's just too much. Plus, I really feel that after enduring the long slog of seeing Furuya pitch an entire eight innings, it's a low blow to throw this at us now - having sat through that, the audience deserved to see a resolution of sorts this week. I'd rather Diamond no Ace leave me frustrated and bitter after a good ep than a mediocre one, but it'd be better still if it didn't leave me that way at all. But that's just how this show is - I've learned to live with it, and avoid watching the previews...