This week on Jitsu wa Watashi wa, the show returns to what (and who) really makes it work best, and the results are predictably good. When it's good, this may just be the funniest comedy of the season. 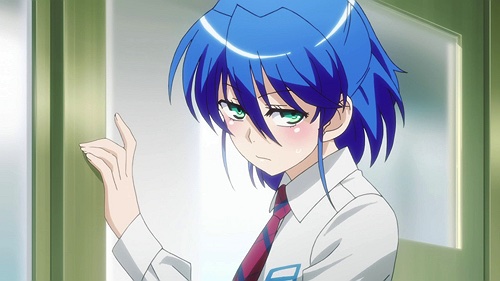 Week 3 was a down week for most of my bubble series, but like Joukamachi no Dandelion, Jitsu wa Watashi wa bounced back in a big way. I've said it before and I'll say it again, the first job of a comedy is plain and simple - to be funny. All the other stuff is what separates the good ones from the great ones, but unless the series gets the funny part down, none of the rest of it really matters. 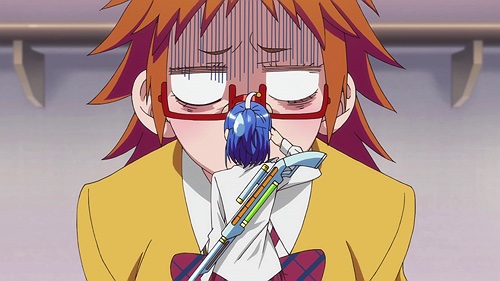 And this show - given the caveat that nothing in anime is more subject to personal taste than humor - is funny. Often enough so far, it's very funny, and it certainly was this week. A smaller dose of Akemi Mikan - certainly both the least funny and least likable main we've met so far - certainly helps. Without her taking over the episode, Jitsu wa is able to slip into its best mode - slapstick and somewhat ecchi without being overly mean-spirited. 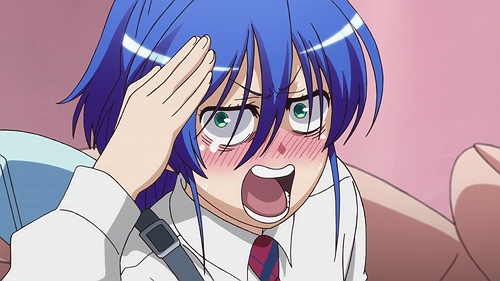 It would be hard to choose between Youko and Nagisa, but in terms of pure comedic horsepower I think the Iinchou may just be at the top of the heap. I mean, for starters just take the fact that she walks around all the time with a bolt sticking out of her head - why, if you're capable of building such a sophisticated mobile suit, go undercover with a bolt sticking out of your head? - yet no one notices (though to be fair I didn't notice, and I wasn't the only one). And when she needs to recharge, she plugs into the wall like a toaster. But it's her manner that really makes her hilarious, and this week's ep gives her a full opportunity to show it off. 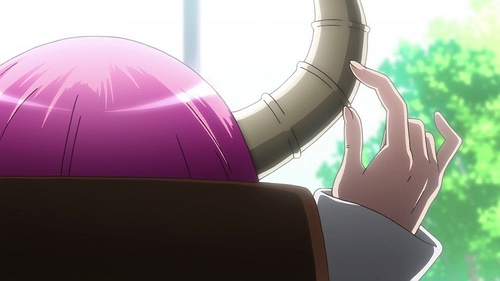 This sort of misunderstanding humor is clearly a comfort zone for Jitsu wa Watashi wa. Okiinchou has run out of juice because Nagisa freaked out at what she thought was an ecchi conversation between Asahi and Youko, and Chiinchou seeks out Asahi's help. Poor Asahi really takes one for the team here - he has to tell the class he needs to leave to do a number two, and he's branded as a pervert for supposedly creating the Iinchou figure that Nagisa pretends to be when Mikan finds her in the hall. 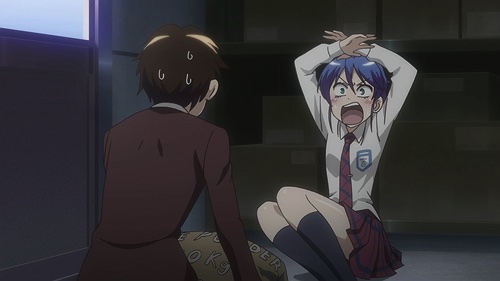 There's lots of great stuff here - I LOL'd when Youko expressed amazement that "someone as together as Iinchou-san" could screw up - but the clear highlight of the episode is when Chiinchou is forced to try and remain an action figure while first Mikan and then Shimada (who has easily his funniest week here, right up to the post-credits sequence) take indecent liberties with her. Her expressions are hilarious, as is Youko's complete cluelessness about what "Eromine" is trying to do despite the fact that she's been in on the secret the entire time. 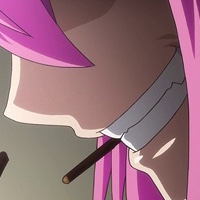 Pushing things towards their eventual conclusion is the interference of Principal Koumoto Akane, who seems to be the latest addition to the freakshow. She's got horns and magical ability, so I'm assuming she's some sort of youkai, and she uses her powers to spontaneously turn Chiinchou into Okiinchou. One upshot of this is that we learn a secret - Nagisa's antenna only glows during courtship rituals - though the fact that she's hopelessly in love with Asahi could hardly be less secret unless you're as clueless as Asahi and Youko. All's well that ends well in the sense that Nagisa gets herself recharged and Akane eventually turns her back to normal size, and Asahi gets to explain to Youko that's not actually Eromine. But I don't see the glow on poor Nagisa's antenna fading anytime soon.