Father vs. son for bragging rights and more. But this is a shounen, and it's only Episode 16... 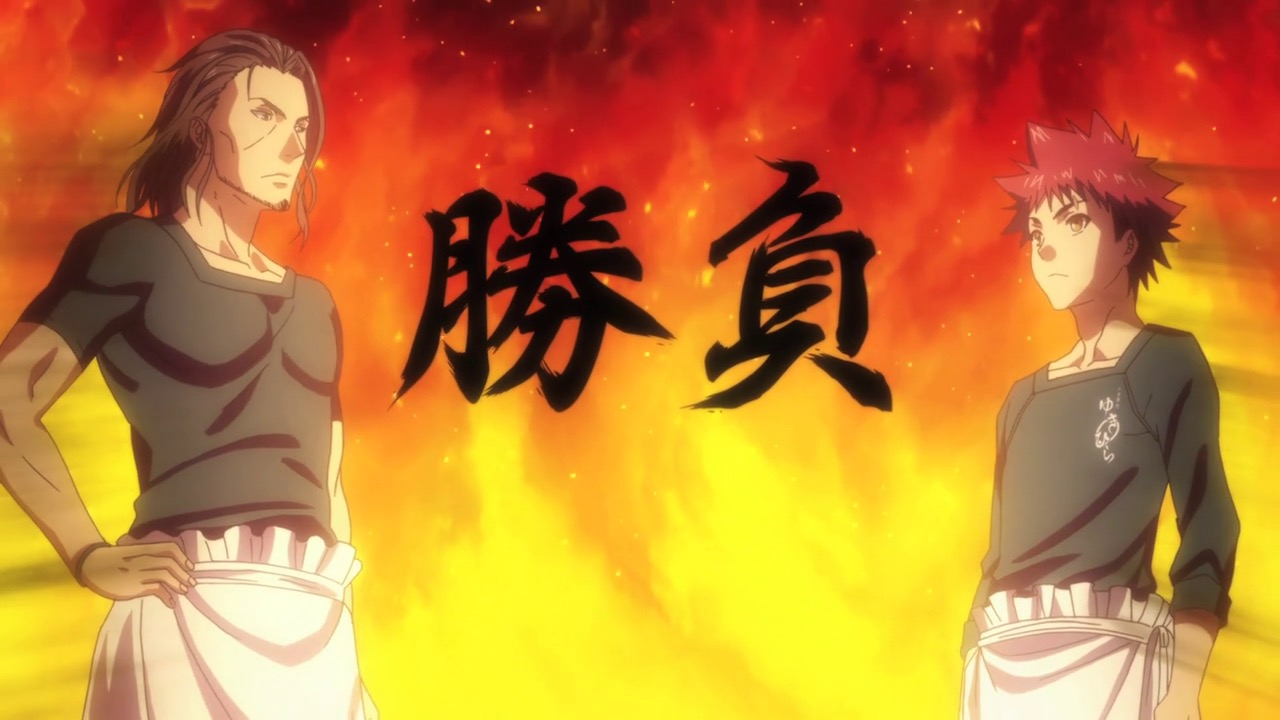 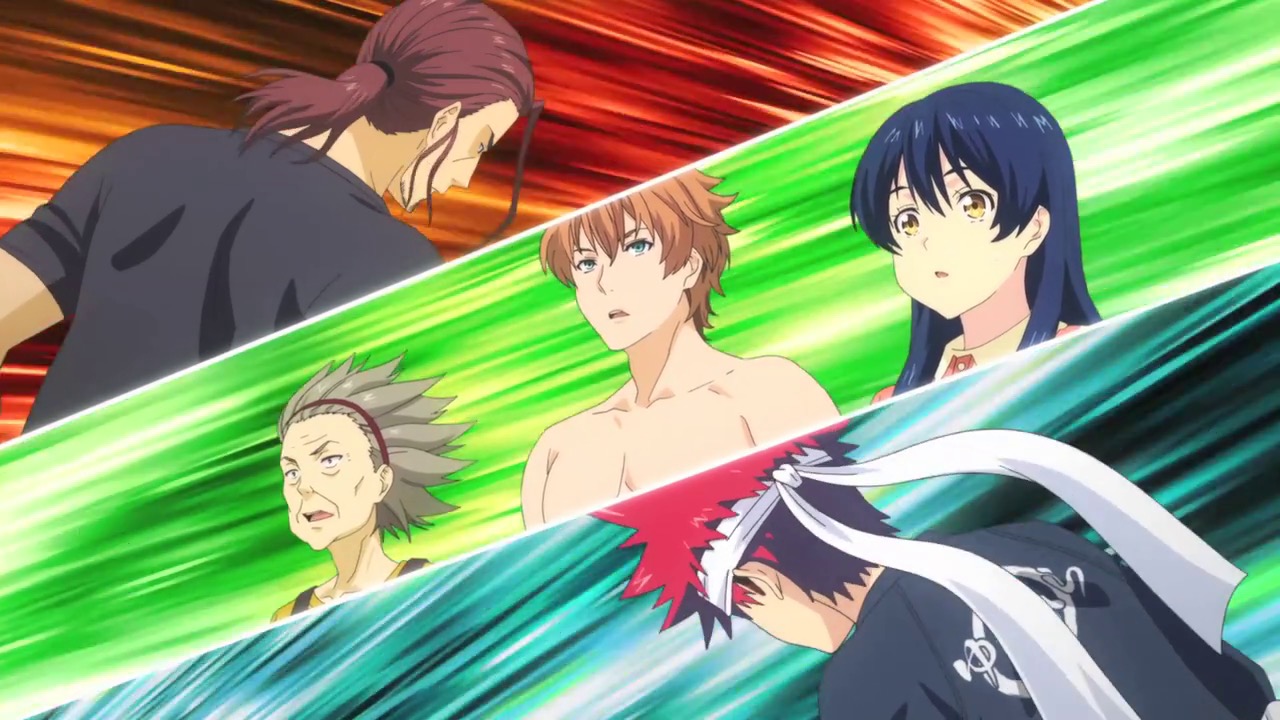 In a sense, this is the perfect season for Shokugeki no Souma to strut its stuff. It's a good show, period, but when so much of the current top tier is made up of series that are decidedly of the throwback variety, Shokugeki no Souma really stands out as an example of how to update a very old style to something completely modern without losing any appeal in the process. And it may just be the most stylish series J.C. Staff has ever done. 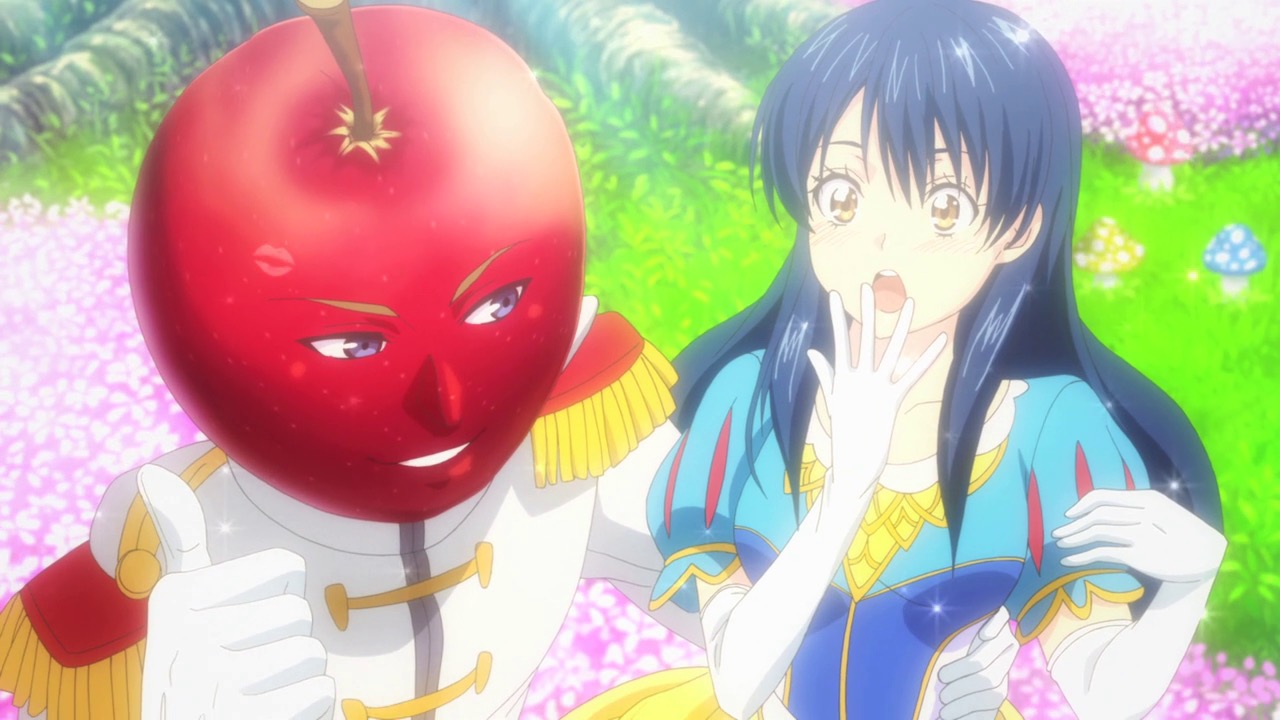 "Stylish" is definitely a term you could apply to the cooking in this series. I'm not sure I can recommend Shokugeki no Souma to those on a diet, but if you're a fanatic gastronome like I am it's consistently a visual feast. Japanese cuisine is such a compelling enigma to begin with, so much more focused on texture and maintaining the essence of the ingredient than most Western cuisines, but Souma layers in elements of Youshoku in such an interesting way that it's hard not to be fascinated by the results. And in no one is that epitomized than Jouichirou. 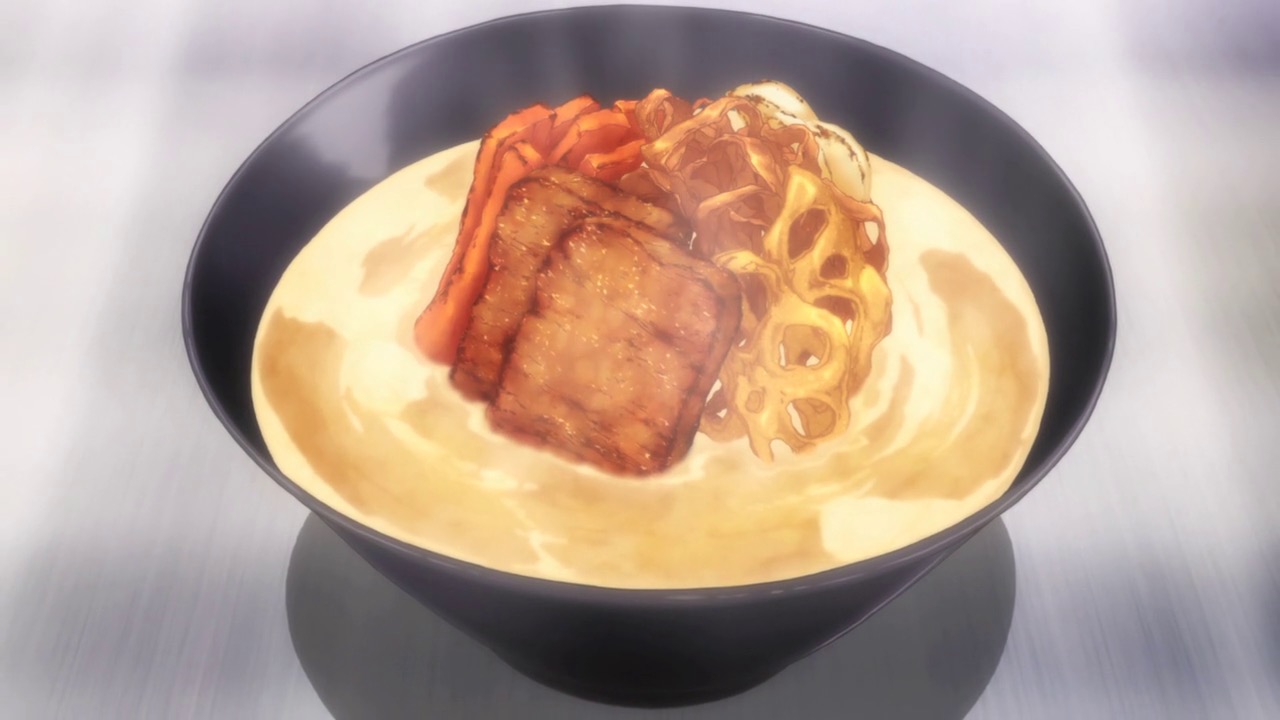 Let's be clear - modern or not, this is still a shounen, and that means there's no way in hell Souma-kun can win this showdown with his father. Jouichirou has to remain the elusive target, the shadowy figure on the edge of the horizon (hey - this is Ging Freecs we're talking about...), and that means Souma's losing streak is a lock to continue (for the record, it sits at 490). But the lack of suspense over that doesn't mean the contest itself isn't going to be interesting - in Jouichirou's own words it's really about seeing how much Souma has grown. And it certainly doesn't mean that watching the two of them interact isn't fascinating in its own right. 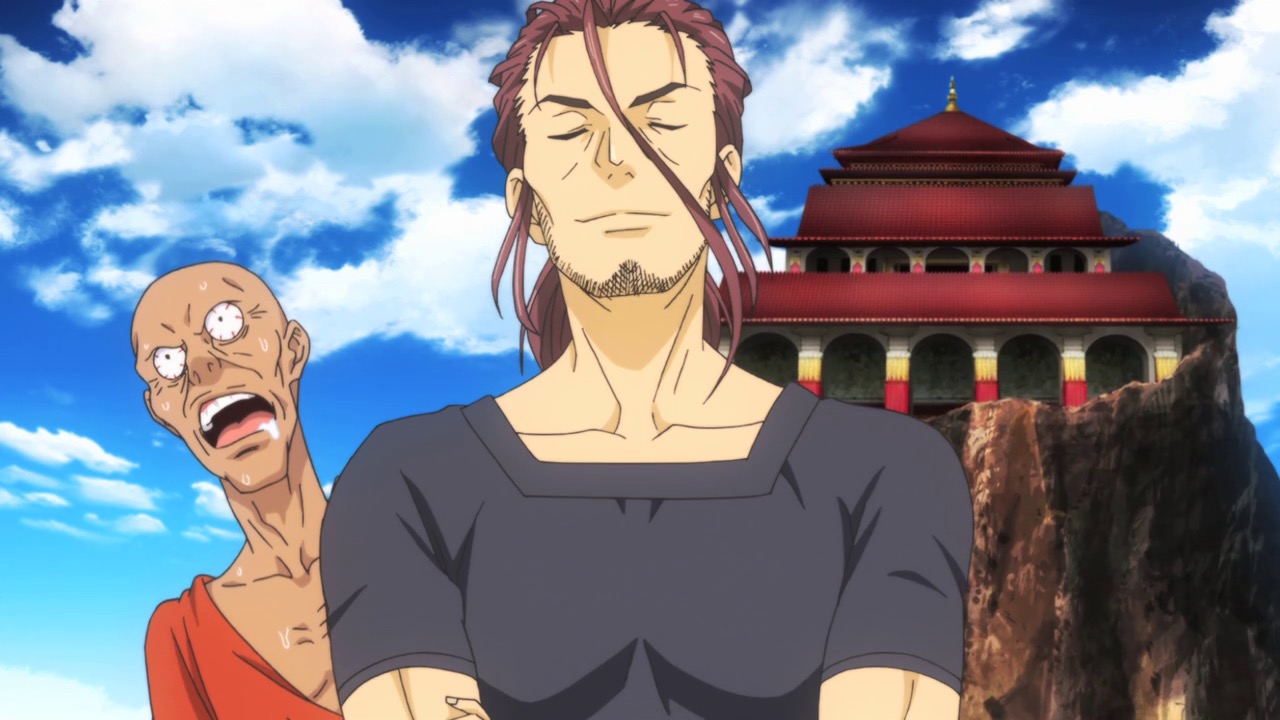 As befits the early morning setting, the theme of this shokugeki is creating a dish to ease the diner into the day. The judges are Fumio-san, the ever-curious (and mostly naked) Isshiki and the very sleepy Megumi (who has no idea what she's wandered into). Souma comes out swinging, offering up a twist on an Italian staple - Apple risotto. It's ingenious, especially the way he infuses the rice and onions with apple flavor by using ringo juusu, preserving the crispness of the fresh apple by adding the slices only long enough to warm them through. And it's well-received by all - refreshing, gentle, and easy on the soul (and stomach). 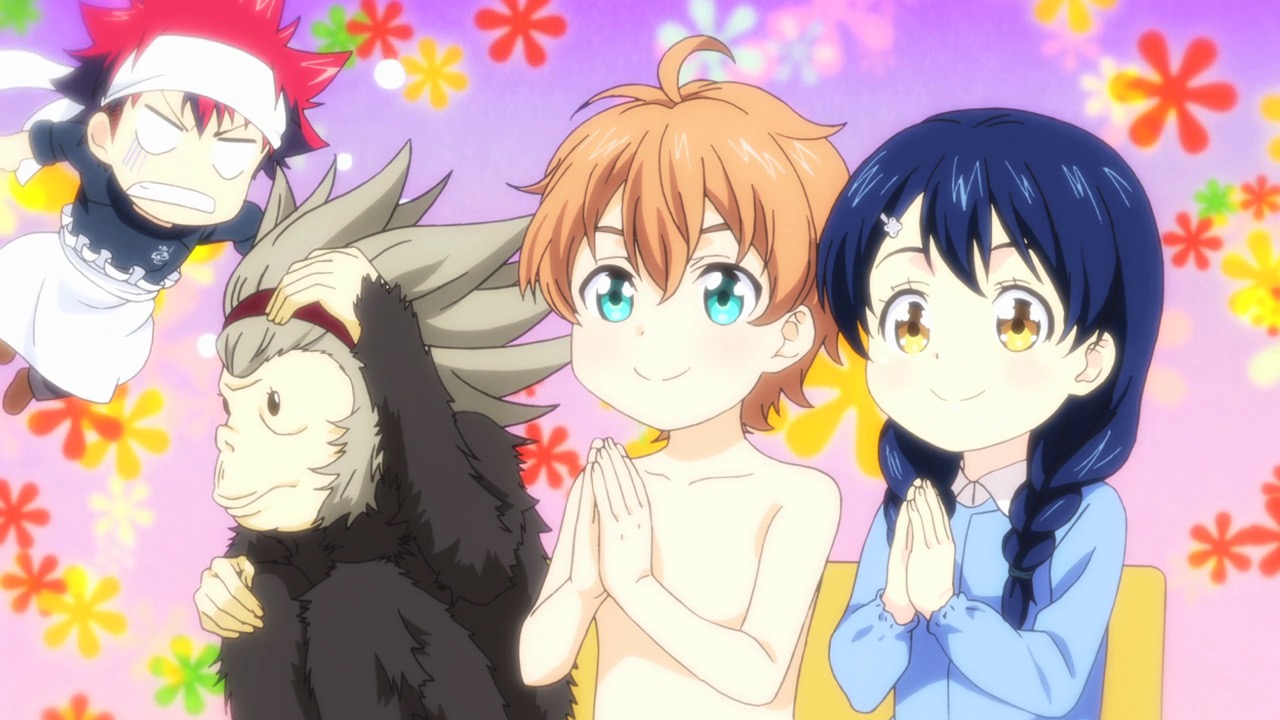 Still, the only question here is how Jouichirou is going to trump it. And the vagabond world traveler does so with a Japanese (though based on Chinese) standard, ramen - albeit one infused with the lessons of those years on the road. One of the great secrets to vegetarian cooking is to use ingredients with lots of umami - seaweed, soy, shiitakes, tempeh and a bit of secret ingredient in ebi-imo taro. The result is pure genius and pure Jouichirou - that most heavy and filling dish, ramen, made light and refreshing for the morning by the use of only vegetarian ingredients (though a small quibble: Buddhist monks cannot east garlic). I desperately want to try this dish - right now. 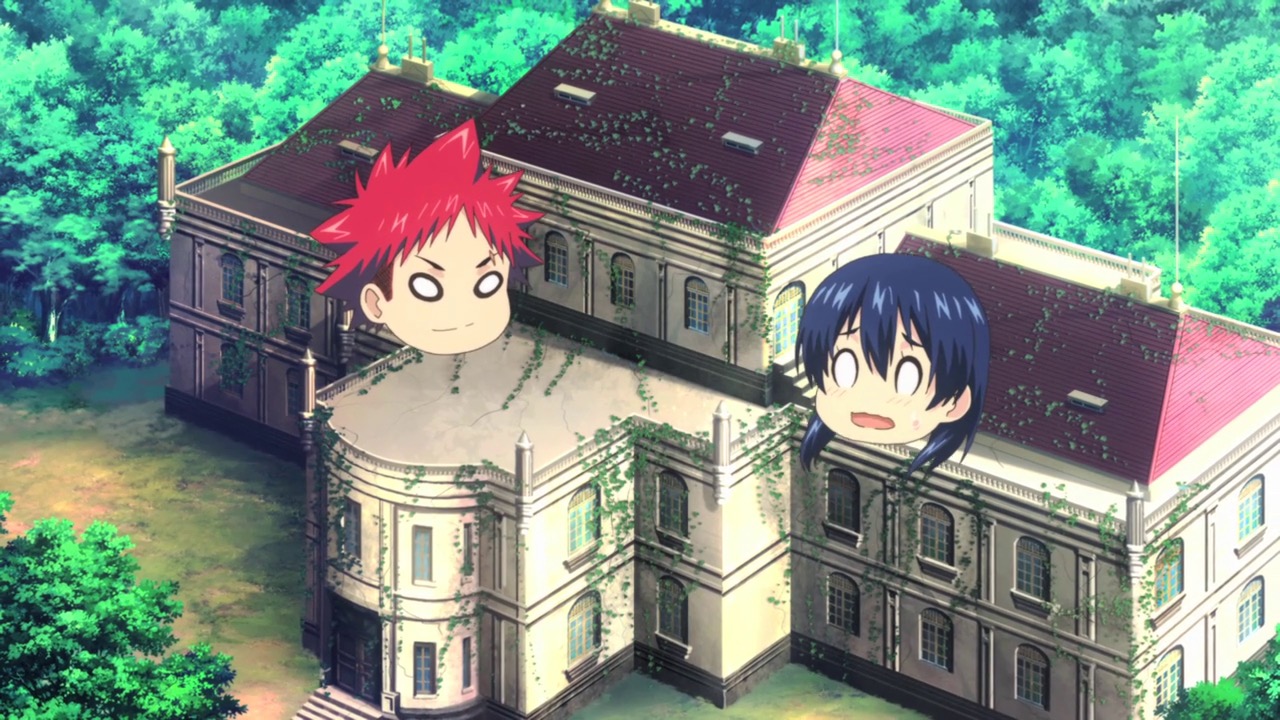 I'm satisfied with the way this showdown came out - Jouchirou was always going to win, but he did so with one of the most amazing dishes in the series so far (his mystique thus remains strong), and Souma took the right lessons away from it. Jouichirou's role in this story is always going to be to appear in the flesh only briefly, so it's no surprise to see him depart immediately after the shokugeki. But he leaves us a couple of interesting tidbits for dessert - first, his comment about the "errand" he came back to Tootsuki for. And then his message to Souma to "air out" the restaurant once in a while. I take this to be an invitation to Souma to throw open its doors and try his hand at running it for a little while during his school break, and I saw nothing in the epilogue to make me doubt that - and that would be a very interesting thing to see, indeed. 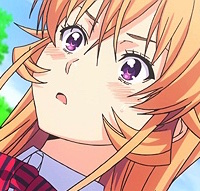