Naruto Shippuuden has more than just dramatic plots and extreme action scenes... It has good-looking characters, too! Featuring 10 hot male characters from Naruto Shippuuden, this list shares important details about each guy along with an attractive image of them. Enjoy the eye candy! 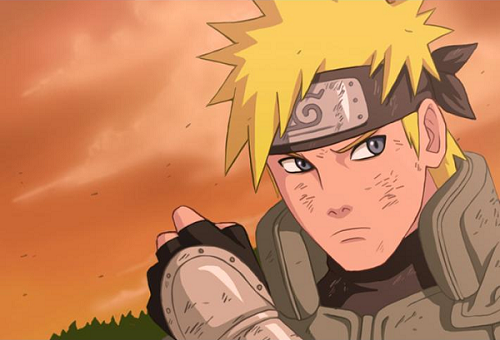 Naruto Uzumaki is the main character of the Naruto and Naruto Shippuuden series. He's the Jinchuuriki or a container for a Tailed Beast for Konohagakure (the Village of the Hidden Leaf). At the beginning of the series, Naruto was treated as an outcast because of his status as the Jinchuuriki. But, as he began to grow as a character, Naruto became a hero to not only the village, but the entire ninja world. With his blond hair, blue eyes, and adorable smile, Naruto definitely deserves to be on this list. Naruto is the Naruto hottie of all Naruto hotties!

He's got the perfect amount of muscle!

Not only is he hot, but his sleeping face is also adorable! Minato Namikaze is the Fourth Hokage or Yondaime of Konohagakure. Minato was known as a genius and one of the greatest ninjas to ever live. His nickname was the Yellow Flash because he was skilled in transportation and moved at jaw-dropping speeds. He was responsible for sealing the Nine-Tailed Beast in Naruto when he was born and he lost his life after doing so. He was married to Kushina Uzumaki (who's pretty hot herself) and was Naruto Uzumaki's father. Jiraiya, a legendary Sennin in the Naruto series, once commented that Minato was a pretty hot guy. Of course, we have to agree. Like father, like son!

He blocks shuriken without breaking into a sweat! You know you're in safe hands if he's protecting you. Kakashi Hatake is Naruto's sensei, and he's considered to be a genius ninja. His father was Sakumo Hatake, also known as the White Fang of Konohagakure. Kakashi's most unique trait is his Sharingan eye, which he received as a present from his peer, Obito Uchiha, for becoming a Jonin. Most of his face is always hidden behind a mask and his headband. Kakashi's mysterious aura makes him one of the hottest male characters in Naruto.

Kakashi is living proof that you don't need to show your face to be hot. Sasuke Uchiha is considered the last remaining Uchiha after his brother, Itachi Uchiha, annihilated the clan. Sasuke is Naruto's main rival in the series. He has the legendary Uchiha Sharingan and is skilled in swordsmanship as well as fire and lightning abilities. He's usually seen acting calm and cool, and he's quite a ladies' man, even though he doesn't reciprocate his fans' feelings. Sasuke's calm and cool demeanor and Uchiha looks make him a Naruto hot guy in our book!

His sharingan make him even cooler!

His smiles are even more beautiful because they are so rare. Is it hot in here, or what? Neji Hyuuga is from the Hyuuga Clan and is another genius ninja from the Naruto series. He's a composed individual and a jonin-level ninja who has mastered his Byakugan. He used to hate the main house of the Hyuuga Clan, but eventually let go of his hatred and even became close with Hinata Hyuuga, the daughter of the Hyuuga Clan leader. Neji's Byakugan, long hair, and noble status make him a hot dreamboat.

He definitely pulls off those luscious long locks.

His chibi self is oh-so adorable as well! Also, it's very important to take good care of your long hair and brush it regularly. Gaara is the Jinchuuriki for Sunagakure or the Village of the Hidden Sand. He was once a cold killing machine. But when he met Naruto, another Jinchuuriki like himself, he changed into someone who was caring and decided to protect his village. He became the youngest Kazekage in Sunagakure's history. Gaara's bright blue eyes, vibrant auburn hair, and dark eyeshadow make him a true Naruto hottie.

There's nothing more attractive than a nice guy who cares for his friends, because you know he'd care for you the same too!

Although he used to be as emo as his guyliner, as an adult, he's not afraid to smile, and it's a beautiful smile too! Hashirama Senju was the First Hokage of Konohagakure, and he was known as the God of Shinobi because of his unrivaled power. He was also known for his creation of the Wood Release, which allowed him to create trees of any size and change the landscape as he wished. Hashirama loved peace and tried to create it during his time, going so far as offering the First Hokage position to Madara. Hashirama's friendly, goofy personality, long and dark hair, and dark eyes make him an attractive man. Fun Fact: Hashirama was Tsunade's grandfather!

What is it with Sharingan and hot guys? Tobirama Senju was the Second Hokage of Konohagakure. He was the younger brother of Hashirama Senju. Known for his powerful Water Release and transportation techniques, Tobirama was considered the fastest ninja and strongest Water User of his time. He was one of the founders of Konohagakure and helped foster it into the strong village it is today. Tobirama's cool personality and Senju looks helped him get on the list!

He's even cute when he's angry! Madara Uchiha was a legendary ninja who rivaled Hashirama Senju in power, and he was the Uchiha Clan leader in his time. When he was a child, he was friends with Hashirama, despite their clans being enemies, and used to talk to Hashirama about creating peace in the ninja world. But, because Madara wasn't chosen as the First Hokage and he was abandoned by his clan, he became a Missing-nin. Even though he's the bad guy in the series, Madara's Uchiha looks and fabulous hair got him on the Naruto hottie list!

You can see where Sasuke gets his good looks from! Itachi Uchiha is Sasuke's older brother, and he annihilated the entire Uchiha Clan to prevent a coup d'etat. He became a Missing-nin and joined Akatsuki after leaving Konohagakure. Itachi was known as one of the best ninjas to ever come from the Uchiha Clan. His Sharingan eyes and Uchiha looks are his ticket to our Naruto's hottest male characters list.

I'd fall under his spell any day, if you know what I mean!

The way he treats his younger brother is heartwarming!

If you haven't yet, be sure to check out these Naruto hotties in action in the Naruto Shippuuden series!

Top 10 Anime Guys Who Would Be Your Best Boyfriend

If you’ve ever thought all these 'real' men just aren’t quite up to snuff, maybe it’s time to shop in a different department. Directions to the anime boyfriend section, anyone?

Let's count down the top 10 male anime characters according to the users of MAL. From spiky-haired shounen protagonists to brooding anti-heroes, these anime guys all have a special something that we just can't get enough of!