“Now that my secret is out, I can no longer live.”-Taiga Aisaka

“You won’t die with a smack on the head with this thing.”-Taiga Aisaka

“What is this stench?!”-Ryuji Takasu (walking into Taiga's house for the first time)

“Trespassing. And imposed cleaning. This better not be your attempt to mark your territory, stupid dog.”-Taiga Aisaka 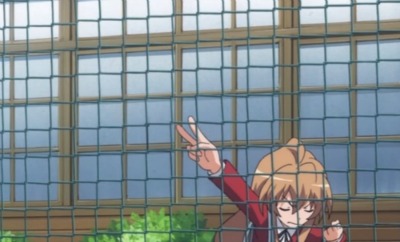 “You need to stop making assumptions. 'I'm the only one who can understand her'. That crap. It just makes you creepier”-Taiga Aisaka

Taiga Aisaka :“Did you get it?"

Ryuuji Takasu : "Get What?"

Taiga Aisaka : "A picture of him going ‘morning’ of course!”

Ryuuji Takasu :“He came out from nowhere. How was I supposed to take a picture?”

“What? I got rid of the skin didn’t I?”-Taiga Aisaka

Ryuuji Takasu :“You need a few more inches to wear that…”

Taiga Aisaka :“I was talking about this bag! The bag!”

“What if we tried child-sized?”-Ryuji Takasu 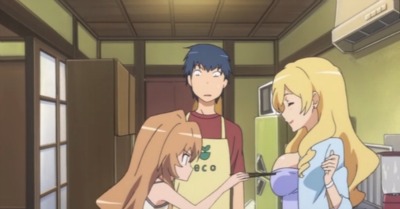 “Naturally, I left the photography club awash in blood.”-Taiga Aisaka

“I’ll make it so you can stand in front of Kitamura…with your chest puffed out.”-Ryuji Takasu

“I had a terrible dream…you were a dog, my husband was a dog…Worst dream ever”-Taiga Aisaka

“Mosquito on your face!”-Taiga Aisaka

Ryuuji Takasu :“You just did.”

“The lovely angel of romance, Taiga, will lend you her aid.”-Taiga Aisaka

Toradora! has many great moments in the anime, but the real magic comes from the conversations between Taiga and Ryuuji, especially when they are in private. The fact that they are honest with each other about who they are and deal with each others' insecurities and flaws allows them to form a deep bond. They don't have to pretend to be anyone other than themselves when they are alone, leaving their relationship quirky, somewhat violent and hilariously honest.

Clannad has a reputation of being both sad and heart warming, but with all that heartbreak also comes a little wisdom. Here are twenty profound quotes from the anime series Clannad.